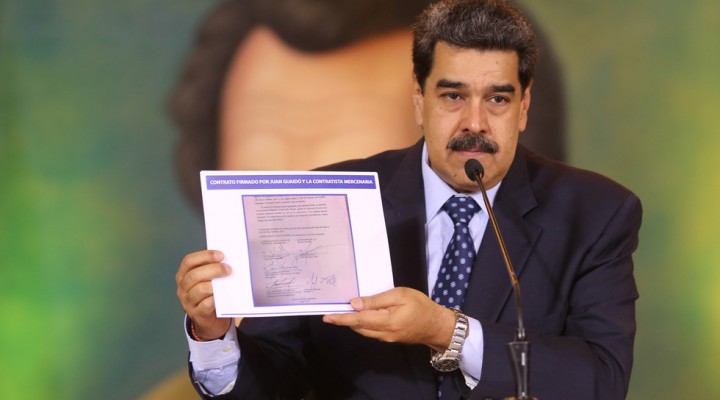 An abortive coup attempt with US ties exposes a lack of leadership and direction as the Trump administration struggles to implement its regime-change plans in Venezuela.

The headlines read like something out of a bad novel: a bunch of commandos, operating from speedboats launched from a “mother ship” disguised as a fishing vessel, land on a heavily populated resort coast in Venezuela to initiate a coup designed to overthrow President Nicolas Maduro. Expecting to be greeted by defectors from the Venezuelan military recruited by 52 operatives who had earlier infiltrated the country from neighboring Colombia, the commandos were instead met by armed Venezuelan security forces, who, in the ensuing firefight reportedly killed six of the would-be invaders and captured two others.

In a bizarre interview following Sunday’s failed amphibious landing, Jordan Goudreau, the head of an American security-services company, Silvercorps USA, accompanied by Captain Javier Nieto Quintero, a defector from the Venezuelan military who had sided with opposition leader Juan Guaido in an failed coup in April 2019, provided details about what he termed Operation Gideon. He said the operation was conducted on behalf of Guaido and that dozens of his men were on the ground inside Venezuela, while others were adrift in a boat off the coast of Venezuela, waiting for a resupply of fuel.

Venezuelan authorities captured this boat and its hapless crew the next day. Among those taken into custody were two former US special forces soldiers, Luke Denman and Aaron Berry, who had served in the same unit with Goudreau; Captain Antonio Sequea, another Venezuelan defector who had sided with Guaido; and Josnars Adolfo Baduel, the son of General Raul Baduel, the former Venezuelan Minister of Defense under Hugo Chavez, who was imprisoned by the Maduro government.

The Keystone Cops-like nature of this abortive incursion would be laughable, if not for the deadly serious consequences for its participants. The Maduro government is claiming that Operation Gideon is a combined operation undertaken by the US government and Guaido. However, the available facts point instead to the amateurish freelancing that has been nurtured in the environment of directionless chaos that’s come to define US Venezuelan policy, where the rhetoric of regime change is not matched by reality on the ground.

Goudreau is a former special forces soldier turned entrepreneur with a knack for self-promotion. After founding Silvercorps USA, he reportedly landed a contract for providing security during a Trump rally held in Charlotte, North Carolina, in November 2018. Through this experience, Goudreau made contact with Keith Schiller, President Trump’s former personal bodyguard. In February 2019, Goudreau provided security for a live concert that sponsored billionaire Richard Branson held on the border between Venezuela and Colombia to raise funds to bring humanitarian aid to Venezuela. The organization of the concert was coordinated with Juan Guaido.

Later, Goudreau made contact with senior members of the Venezuelan opposition, including Cliver Alcala, a retired Venezuelan major general who was helping organize Venezuelan military deserters into an anti-Maduro force. In April 2019, these deserters sided with Guaido in an attempted barracks coup inside Venezuela, which collapsed when senior officials in the Maduro government who had allegedly been contacted by the CIA failed to defect to his cause.

Since the failed coup, US policy toward Venezuela has been in a state of flux, with senior administration officials such as Secretary of State Mike Pompeo and Special Representative for Venezuela Elliott Abrams talking the talk of regime change while advancing the cause of Juan Guaido. Meanwhile, the State Department has been setting up a Venezuela Affairs Unit at the US Embassy in Bogota, Colombia, under the leadership of veteran diplomat James “Jimmy” Story. Policies promoting the continued economic and diplomatic isolation of the Venezuelan government have been promulgated, with decidedly mixed results.

Left in the lurch were hundreds of defectors from the Venezuelan security services, who remained under the control of General Alcala, and had gathered in camps along the Colombian border with Venezuela. These men had been preparing for the instigation of active measures targeting the Maduro regime, but, in the aftermath of the failed coup, were all but abandoned.

In May 2019, Goudreau met with Schiller in Miami, where he was put in contact with people from Juan Guaido’s inner circle. Schiller claims to have cut off all contact with Goudreau following that meeting, but this didn’t stop Goudreau from claiming, in future meetings with the Venezuelan opposition, to have high-level contacts close to Trump. Goudreau used the May meeting as a springboard for further collaboration, which resulted in a signed agreement with Juan Guaido in October 2019 to provide unspecified “services” in exchange for a sum of US$212.9 million secured by Venezuelan oil.

Goudreau next worked with General Alcala to begin training and equipping a unit of up to 300 hand-picked defectors for an operation designed to capture Maduro and claim the US$15 million bounty that had been placed on Maduro by the US government.

What followed was a bungled coup that was seemingly initiated on March 26, 2020, when General Alcala announced that he was overseeing ongoing military operations inside Venezuela that were intended to create the conditions for Maduro’s removal. The next day, however, Alcala surrendered to Colombian authorities after the US indicted him on narco-trafficking charges. Alcala then agreed to be turned over to the US for extradition in exchange for his cooperation in the investigation into narcotics trafficking charges against Maduro leveled by the US. Goudreau’s Operation Gideon appeared to be a continuation of the operation initiated by Alcala back in late March.

For its part, the Trump administration has denied any involvement in Goudreau’s ill-fated invasion of Venezuela. But these denials ring false. The overt involvement of US military veterans, the lack of adequate funding, and the amateurish nature of the operation’s execution strongly support the contention that this was not a CIA-affiliated effort. Nor were there any official ties to the Department of Defense, the Drug Enforcement Administration, or any other official US government agency.

Goudreau’s badly bungled operation was less a byproduct of an act commissioned by Washington and, instead, more a product of omission. The conditions that existed along the Colombian border with Venezuela, where hundreds of military defectors had assembled without purpose or support, was ripe for this kind of misguided adventurism. Likewise, the continued propping up of Juan Guaido as a viable opposition figure by the US government, when combined with the ongoing rhetoric of regime change by senior Trump administration officials, created false hope that US support would be forthcoming, even if it wasn’t being directly offered.

The US government was clearly positioned to know about the coup being planned by Alcala, Goudreau and Guiado (who denies any involvement), and did nothing to stop them. Whether this failure to act was down to incompetence or willful design is not yet known. What is known is that US policy toward Venezuela operates void of any meaningful direction or guidance, leaving those whom the US had at one time led to believe Juan Guiado was their future feeling abandoned and forgotten, adrift in a sea of policy neglect and the chaos that follows.