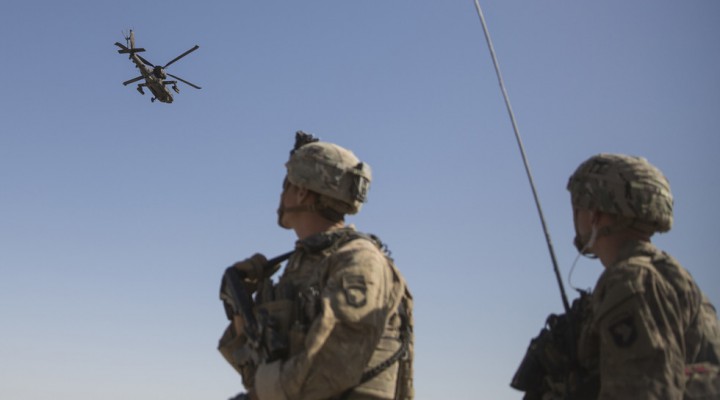 It was Russia in June, now it’s Tehran. Don’t US analysts understand that Taliban fighters really don’t need any more motivation to target American troops? This is simply politicized (un)intelligence that isn’t fooling anyone.

According to CNN, the Iranian government has paid “bounties” to the Haqqani network, a terrorist group with close links to the Taliban, for six attacks on US and coalition forces in Afghanistan in 2019, including one on December 11 which targeted Bagram Air Base, north of Kabul, which wounded four US personnel.

This explosive allegation was contained in a Pentagon briefing document which was reviewed by CNN. While the bounties mentioned were attributed to an unnamed “foreign government,” CNN claims that sources “familiar with” the intelligence named the country as Iran. These bounties, and the attacks on US personnel they underwrote, played a role in the deliberations that led to the assassination of Major General Qassem Soleimani, the head of the Iranian Quds Force, by US forces in early January 2020, the network reported.

The CNN report comes on the heels of similar allegations regarding “bounties” paid by Russian military intelligence to the Taliban, likewise for the purpose of underwriting attacks on US and coalition personnel in Afghanistan. The Russian bounty story has since turned out to have been based upon uncorroborated raw intelligence deemed by senior US officials as being too poorly sourced to be actionable by the president or his senior advisers. The intelligence was leaked to the press regardless, in what appeared to be an effort to undermine President Trump’s ongoing efforts to forge a peace agreement with the Taliban and to embarrass him in the leadup to the 2020 presidential election.

At first blush, it appears that the CNN reporting is cut from the same cloth as was the Russian “bounty” story. First and foremost (as the CNN reports notes), the Haqqani network did not, and does not, need financial incentives from outside agencies to motivate it to carry out attacks against US and/or coalition targets. As such, even if payments were in fact sent from Iran to the Haqqani network, the likelihood that they were linked to the December 11 attack, or any other, is virtually nil.

The linkage attributed to the December 11 attack on Bagram Air Base and the decision by the US to assassinate Qassem Soleimani is likewise tenuous. In the days, weeks and months following the Soleimani assassination, the Trump administration was called to task by Congress and the media about its justification for the Soleimani strike. While a great deal of weight was given to a rocket attack on K-2 Air Base in Iraq on December 27 that killed a US civilian contractor, there was no mention at any time about any Iranian “bounty” scheme ongoing inside Afghanistan, despite the fact that a direct correlation between such a “bounty” and the need to kill Soleimani would have been a stronger argument in favor of the attack on the Iranian general.

US intelligence has claimed that Iran has been providing “modest” amounts of armaments to the Taliban on an ongoing basis since 2007, something both the Taliban and Iran deny. According to statements made by US intelligence spokespersons in November 2019, this assistance was beefed up in 2015 to assist the Taliban in confronting Islamic State (IS, formerly ISIS) inside Afghanistan. No mention was made of any “bounty” scheme, although Secretary of State Mike Pompeo did link the Iranian assistance to an attack on US forces in May 2019.

While there is evidence to suggest that Iran and the Taliban enjoyed some sort of a relationship dating back to 2007, this relationship seemed focused on supporting Taliban forces based out of western Afghanistan, along the border with Iran; there was no evidence that this relationship included the payment of “bounties” for targeting US personnel.

Moreover, there was no suggestion that at the time of the December 27, 2019 attack on Bagram Air Base, Iran was providing support to the Haqqani network, a Sunni terrorist organization with close links to Pakistani intelligence and which operates out of the Pakistani city of Quetta. Indeed, the first indication of an Iranian connection to the Haqqani network came in the aftermath of the signing of the US-Taliban peace agreement in February 2020, when fringe elements of the Taliban, including allies within the Haqqani network, broke away in order to continue the struggle against the US in Afghanistan.

Even this reporting is sketchy – the alleged Iranian-Taliban-Haqqani cooperation was in the “early stages of forming,” not indicative of the kind of maturity that would have had to exist to sustain any viable bounty scheme. Moreover, any cooperation that was still in its infancy in February 2020, could not have been the basis of an arrangement regarding an attack that took place in December 2019. Finally, an Iranian-Haqqani bounty scheme would fly in the face of the public commitment by the Haqqani network in support of the US-Taliban peace agreement. In short, the CNN report fails on matters of fact and logic.

The timing of the CNN report provides the greatest insight as to why such a poorly sourced and thinly argued claim would be made against Iran at this time, coming as it does on the heels of the US losing a major vote in the UN Security Council concerning the lifting of an arms embargo against Iran.

This embarrassing defeat, in which the US was only able to garner a single additional vote in support of its resolution, has set the stage for an even greater confrontation at the UN over so-called “snap-back” sanctions the US seeks to impose on Iran.

The Iran-Haqqani bounty allegation was leaked by persons in the US intelligence community who have no qualms about injecting manufactured and/or misleading intelligence into the American news cycle at a critically sensitive time, with less than 90 days remaining until the 2020 US presidential election. Instead of seeking to embarrass President Trump, this leak is designed to bolster the Trump administration’s argument that Iran is a threat worthy of sustaining a major confrontation at the Security Council which could threaten the legitimacy and viability of that organization.

In the end, the motives behind an intelligence leak are irrelevant. The US intelligence community, through its repeated use of well-timed leaks to influence policy by deceiving the American public about the truth, has shown itself to be a highly politicized institution that operates at the whim of nameless partisan operatives, and not in the best interests of the United States.

That it can still ask for and receive a budget in excess of $80 billion per year is a harsh indictment of just how decrepit the US system of government has become, where a blind eye continues to be turned when it comes to the blatant abuse of intelligence for purposes other than what it was intended for.

0 thoughts on “Here we go again! US intelligence saying IRAN is paying bounties to kill Americans in Afghanistan is pure parody”