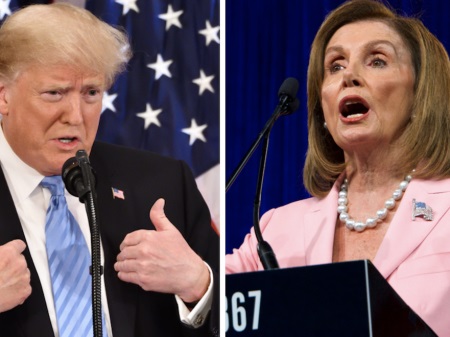 Trump needs to get his head out of the campaign and start acting like the leader of the free world.

The outbreak of COVID-19 (coronavirus) has left the United States struggling to craft a medically and scientifically sound response in a highly politicized atmosphere.

While almost every aspect of the outbreak to date has an air of inevitability about it, there is much that can be done going forward to better prepare for, and respond to, a pandemic, if and when one materializes. The United States, as a world leader, is positioned to play a critical role in formulating and implementing any such response but finds itself hobbled by political incompetence and infighting. The result could be catastrophic.

Over the past few weeks, the world has watched as a new, deadly, and highly contagious disease took hold in the Chinese city of Wuhan, infected passengers onboard luxury cruise ships, and subsequently spread to three dozen countries on every continent except Antarctica. Reports indicating the virus can be spread by victims who exhibit no symptoms has thrown health professionals into a panic. Hundreds of thousands of people have been infected, and more than 2,800 have died to date, most of them Chinese. The fatality rate for the coronavirus is greater than 2 percent, a major increase over the 0.1 percent for the common flu.

As the coronavirus has progressed, more than 110 Americans have been hospitalized for treatment and/or monitoring across 26 states. Uncertainty has derived from the mixed messages being sent by the Trump administration over the severity of the outbreak and the preparedness of the U.S. government. This has sent Wall Street into a dive, with the Dow Jones losing nearly 10 percent of its value over the course of two days. On the evening of February 25, President Donald Trump delivered a televised address to the American people, hoping to inspire confidence.

The president had been under pressure to appoint a so-called “czar” to oversee his administration’s response to the crisis. The expectation had been that he would choose a scientist, an expert of epidemiology with the knowledge and experience to manage the outbreak. Instead, he appointed Vice President Mike Pence. Wall Street futures immediately sank more than 300 points, and the next day—February 27—the Dow Jones collapsed an additional 1,200 points, the largest single day drop in its history.

The United States is in the midst of political silly season, with the Democratic Party knee-deep in a contentious primary process focused singularly on defeating Trump. President Trump is sensitive to anything that could be used against him by the Democrats in the upcoming election. One of Trump’s biggest selling points to date is the healthy state of the economy. The collapse on Wall Street, however, combined with a major disruption in global supply chains brought on by the quarantining of production centers in China and elsewhere, threatens to slow global economic growth. It could even trigger a global recession.

While the chronology of the coronavirus shows a strong cause-effect relationship between the outbreak, the lack of a viable U.S. government response, and the collapse of financial markets, President Trump still sought to deflect blame onto the Democrats, who had engaged in a chaotic televised debate on the evening of February 24. “I think the financial markets are very upset when they look at the Democratic candidates standing on that stage, making fools out of themselves,” Trump said.

In his televised press conference, Trump repeatedly made the case that his administration was “very, very ready” for a coronavirus outbreak. This position, however, has been directly contradicted by Nancy Messonnier, director of the Centers for Disease Control and Prevention’s National Center for Immunization and Respiratory Diseases, who in a speech delivered a day before the president’s press conference warned, “Ultimately, we expect we will see community spread in this country. It’s not so much a question of if this will happen anymore but rather more a question of exactly when this will happen and how many people in this country will have severe illness…[a]t this time, there’s no vaccine to protect against this new virus and no medications approved to treat it.”

Confidence in the Trump administration’s approach to the coronavirus outbreak was further shaken by comments made by health secretary Alex Azar, who joined the president at the White House dais to proclaim, “Our containment strategy has been working.” Immediately following the press conference, however, the Centers for Disease Control announced that a person in California had contracted the disease without having recently traveled to impacted areas or having contact with individuals known to be infected. “It’s possible this could be an instance of community spread of COVID-19, which would be the first time this has happened in the United States,” the CDC noted in a statement. Secretary Azar’s confidence regarding containment was found to be little more than wishful thinking.

The seeming disconnect within the Trump administration between the science of epidemiology and the politics of a presidential election season emerged when trying to put a price tag on the response to the outbreak. Trump has put forward a request to Congress for $2.5 billion in emergency supplemental funding. This number was openly mocked by Senate Minority Leader Chuck Schumer, who put forward his own bill requesting some $8.5 billion in funding. Speaker of the House Nancy Pelosi decried Trump’s proposal as “shameful,” noting that it was “too late, too anemic.”

Continuing the tit-for-tat, Pelosi urged bipartisanship, then criticized Trump’s response to the coronavirus as “opaque and often chaotic,” declaring that “lives are at stake” and, without any apparent irony, concluding, “This is not a time for name-calling or playing politics.”

Trump was not only fighting the Democrats, but also members of his own party, in particular Senator Richard Shelby, the head of the Senate Appropriations Committee. Shelby declared that Congress, working with the administration, should “do everything we can to make sure they have the tools, the money, to do the job to prevent the spread [of the coronavirus] as much as they can, and if it spreads to mitigate it.” He added, “Let’s not try to low-ball it and be pennywise and pound foolish.”

The president is, perhaps rightfully, coming under attack for his haphazard and disjointed approach to the coronavirus outbreak. But the American presidency isn’t the most powerful office on earth for nothing. Even after stumbling out of the gate, Trump can still pour more focused resources into an issue than anyone else. He is currently considering invoking special powers given to him under the Defense Production Act to expedite the domestic production of protective masks and clothing.

But even this won’t be enough to halt the potentially catastrophic spread of the coronavirus in the United States. The Centers for Disease Control, promoted by Trump’s political rivals as the pinnacle of professionalism when it comes to epidemiology and related emergency response, has fumbled badly. It denied doctors in California access to critical testing that could have detected the virus in a patient to whom it had spread, failing to do so because “the patient did not fit the existing CDC criteria.” Even if a test had been ordered in a timely fashion, it still might not have detected the virus: the CDC sent out faulty test kits to hospitals around the world that generated “inconclusive” results. The ongoing political infighting between Trump and his critics has impaired proper oversight of the CDC, magnifying errors that should have been corrected early on.

The outbreak of the coronavirus could not have come at a worse time for the United States. There remains an inherent tension between the executive and legislative branches of government in the aftermath of President Trump’s acquittal during his impeachment trial. This tension, when combined with the toxic political environment of the ongoing presidential race, means that everything Trump does will be subjected to highly politicized scrutiny. Politics is trumping science and medicine, diluting the effectiveness of any response. The consequences could very well be catastrophic.