HOME / WORLD / Kamala Harris’s race and gender are a beautiful wrapping. Underneath, same old establishment – but what America needs is change 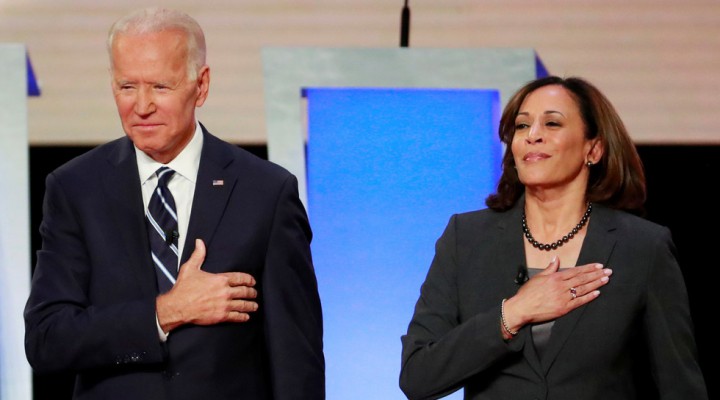 Joe Biden has selected Kamala Harris as his running mate. By picking a woman of color, Biden has energized his base, and in doing so, made history. Whether or not this is enough to overcome Harris’s baggage is another question.

It’s a grainy video clip, shot in less than ideal lighting. “Hi. Sorry to keep you,” a woman’s voice calls out. Joe Biden, the presumptive Democratic nominee for President of the United States, is shown seated at a desk, listening. He then says, into a speaker phone. “Are you ready to go to work?” Off camera, the woman’s voice replies, “Oh my God, I am so ready to go to work.”

The video in question was part of a recently released campaign advertisement showing the moment Joe Biden notified Kamala Harris she was his choice to be his running mate. It was good TV, capturing the emotion and excitement of a decision that has made history by positioning a black woman to become not only the first female Vice President in American history, but also the future leader of the Democratic Party and, if Joe Biden prevails in November and subsequently bows out prior to the completion of his term, the first female President of the United States.

If you’re an American worthy of the name, this should be a moment that resonates. Regardless of one’s political leanings, the fact that a black woman could ever aspire, let alone achieve, such a level of recognition speaks volumes to the reality that the grand social experiment that is the United States, as imperfect as it is, remains capable of changing for the better.

Let there be no doubt: Kamala Harris was not given this honor as some sort of modern-day political affirmative-action program. She earned it through a career of service as a prosecutor at the local, city and state level, as a United States Senator, and as a candidate for national office who proved herself before a national audience. She is every bit as worthy and capable as any Vice-Presidential candidate who has gone before.

The question before the American people, however, is not whether Kamala Harris has a resume worthy of consideration to be Joe Biden’s running mate – she clearly does. Rather, it is whether this resume is the right one for this moment in time.

On this, the answer may very well be a resounding “no.”

Biden’s selection of Senator Harris was not a total surprise; he had previously indicated he was leaning toward a female of color, and Harris’s stature clearly put her at the head of what was a relatively small field of qualified candidates. US politics, especially at the national level, is a nasty business, a full-contact sport where the referee rarely calls foul. Any person picked by Joe Biden would be subjected to a level of scrutiny that would make the average American rightfully balk at ever considering a run at public office.

In the contentious, overly partisan political atmosphere of the present, this scrutiny will take on a level of vociferous cruelty unmatched in modern times. Already, social media outlets have seen a wave of commentary that is overtly sexist and racist in nature. President Trump has joined in with comments that sustain this line of attack. In the days, weeks and months to come, these attacks will only intensify, underscoring the reality that, while the American people are capable of nominating a woman of color to be Vice President, they are also capable of employing the most base methods to tear her down again.

If the contest between Trump/Pence and a Biden/Harris were simply over sex and race, the November election would be game, set and match for the latter. But it is not – it’s about the future of the United States and, by extension, the rest of the world (in so far as the policies undertaken by any Presidential administration resonate globally). While the Democratic Party argues – convincingly – that the Trump Presidency has been an unmitigated disaster for America and the world, what it hasn’t been able to do convincingly is articulate how a Biden Presidency would, or could, result in meaningful change. Indeed, the brand that Joe Biden and the mainstream Democrats are selling appears to be a repackaging of the platform, policies and personalities that were unsuccessfully marketed by Hillary Clinton in 2016.

While Kamala Harris’s presence on the Biden ticket has historic significance, it doesn’t alter the fundamental issue of content, regarding what the American people could expect from a future Biden administration. Harris’s demographics are not electorally significant – neither her gender nor her race threaten to shake up the composition of the Democratic Party’s core constituency, and Joe Biden is expected to win Harris’ home state of California by a wide margin. The bottom line is that Kamala Harris’s record as a prosecutor and Senator paints her as a middle-of-the-road moderate at a time when the Democratic Party needs to win over a progressive wing mobilized to oppose Trump, but is left marginalized as its preferred policy positions and candidates are swept to the side by the Biden political machine.

Kamala Harris will be – rightfully so – called on to defend her record as a prosecutor. Her takedown at the hands of Tulsi Gabbard during the Democratic primary debates has exposed her vulnerability on this issue, which is one the Republicans will certainly seek to exploit. Moreover, given the current political climate in the United States, fueled as it is by social justice issues and unsympathetic to the pro-law enforcement policies promoted by Harris, the Democrats run the risk of demoralizing a significant portion of its base right out of the gate. In an election in which the Trump campaign will be playing the ‘law and order’ card repeatedly, having a ‘law and order’ candidate sharing the Democratic ticket may prove to be counterproductive, especially if a significant number of the protesting class opt out of electoral participation as a result.

At the end of the day, however, it will all come down to Kamala Harris herself, and her qualities as a human being and political candidate. In 2016, Donald Trump shrugged off the kind of attacks on his character that would have sunk any other candidacy and went on to win the election. There is nothing in Kamala Harris’ background that hints at even a fraction of the scandal Trump ended up overcoming. Trump prevailed because he was able to successfully market himself as a conduit for change. The Biden/Harris ticket, as it currently exists, is the antithesis of change – in short, many Americans are left with the realization that nothing will fundamentally change if Joe Biden wins the election.

Faced with the prospect of no meaningful change in how America will conduct itself domestically and globally, the average voter will be called upon to vote in what will be little more than a personality contest. Trump, for his many faults, is a charismatic leader with broad support among an unwaveringly loyal base. Kamala Harris, while possessing a compelling personal story, is not. She can come off mean and vindictive, and when combined with what can only be described as aggressive posturing, the overall effect can be, and has been, off-putting. Harris is more of a divider than unifier – a reality that, in an election that’s expected, as in 2016, to come down to a few thousand votes in a handful of swing states, could very well prove to be the deciding factor in securing a Trump victory come November.

0 thoughts on “Kamala Harris’s race and gender are a beautiful wrapping. Underneath, same old establishment – but what America needs is change”