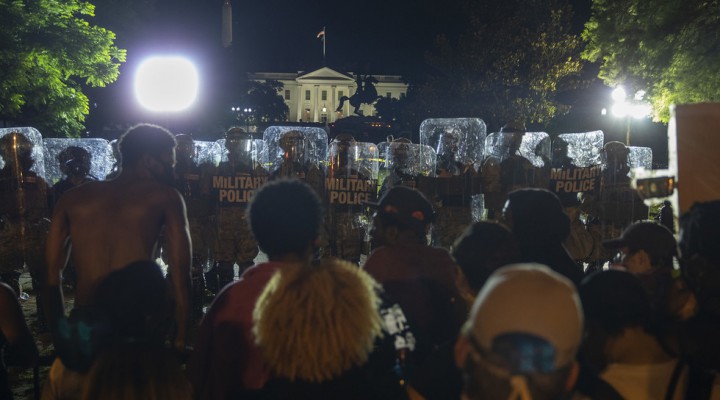 As American political leaders are confronted with the scope and scale of the unrest engendered by decades of failed policy, they’re turning to a time-tested scapegoat to deflect responsibility away from their shoulders – Russia.

While American cities burn, its politicians are desperately looking to assign responsibility for the chaos and anarchy that is unfolding. Among those casting an accusatory finger is Senator Marco Rubio, a Republican from the State of Florida and the acting Chairman of the Senate Select Intelligence Committee.

Evelyn Farkas, a former Obama-era defense official and current candidate for Congress, tweeted“I hope the @FBI is investigating potential direct or indirect foreign interference in looting. Definitely not out of the question.” While neither Rubio nor Farkas named Russia in their tweets, they are both well-known for their Russia-baiting postings on social media, and there could be little doubt as to whom they were pointing an accusatory finger at.

President Obama’s former National Security Advisor, Susan Rice, however, left no doubt about where the source of this “foreign influence” came from. In an interview with CNN’s Wolf Blitzer, Rice, discussing the violent protests sweeping America today, declared “I would bet, based on my experience, I’m not reading the intelligence these days, but based on my experience this is right out of the Russian playbook as well.”

Rice, Rubio and Farkas are not alone. Typical of the anti-Russian hyperventilation taking place in US media regarding Russia’s alleged hidden hand in the ongoing riots is an article published by CNN, written by Donie O’Sullivan, a reporter who works closely with CNN’s investigative unit “tracking and identifying online disinformation campaigns targeting the American electorate.” While concluding that “the protests are real, and so are the protesters’ concerns,” and cautioning the reader to step back and take a breath “before getting too caught up” in any discussion about Russian involvement, O’Sullivan asserts that starting with the 2016 Presidential election “Russia backed (and is likely still backing) an elaborate, years-long covert misinformation campaign” involving “a network of Facebook and Twitter pages designed to look like they were run by real American activists and that were used to stoke tensions in American society.”

But the pièce de résistance comes in the middle of the article. “Arguably Russia’s biggest achievement,” O’Sullivan states, “was the paranoia it instilled in American society. We now regularly see Americans accuse people and groups on social media that they do not agree with of being Russian trolls or bots. These accusations are often made with no evidence and can distract from and undermine real Americans who are engaging in political speech.”

Thanks to Russia, O’Sullivan asserts, Americans now have Russia on their mind even if Russia is not involved–which is, of course, Russia’s fault. But don’t fret—“It is possible that we will learn in the coming days, weeks, and months that some covert activity has been going on–that some Facebook pages and Twitter accounts encouraging violent protests are indeed linked to Russia.”

The United States today functions in a never-never land of fiction and fantasy when it comes to allegations of Russian meddling in its internal affairs. Logically speaking, most Americans should be insulted by the notion that their democratic institutions are so weak that a half-baked social media campaign could sway a national election (never minding the reality that former presidential candidate Michael Bloomberg spent more than $500 million on advertising, run by the most sophisticated media support team in the history of American politics, and couldn’t get the electoral needle to move an inch).

There is a truism that you cannot solve a problem without first properly defining it. In their effort to shift blame away from their own failings by alleging “outside” (i.e., Russia) sources of interference in the ongoing social unrest ravaging American cities, the politicians and leaders Americans look to for solutions are setting themselves up for failure, if for no other reason that any solution which is predicated on unproven allegations of Russian meddling isn’t solving the real problems facing American society today.

Russia did not direct the murder of George Floyd at the hands of the Minneapolis Police. Nor did Russia direct and implement decades of policing culture in the United States underpinned by racism, backed by a system of justice that sustained and magnified the same. The social and legal inequities of American law enforcement have been a problem hiding in plain sight for decades, only to be ignored by generations of American leaders who exploited the fear-based culture that fed on this system for their own political gain; Russia had nothing whatsoever to do with this cancer that has metastasized throughout the width and breadth of the American body public.

It is the height of intellectual hypocrisy and moral cowardice for those whom America needs the most in this time of trouble to stand up and take a hard, honest look at the diseased nature of the American law enforcement establishment today, and make the kind of difficult but necessary decisions needed to reform it, to instead cast blame on the Russian bogeyman. The Russian blame game may play well on media outlets that long ago surrendered to a political establishment desperate to retain power and influence regardless of the cost. But, for the legion of Americans whose frustration with the inherent racism of American policing policies today, this kind of simplistic deflection will not succeed. America’s cities are on fire; manufacturing false narratives that place the blame for this conflagration of Russia will not put them out.