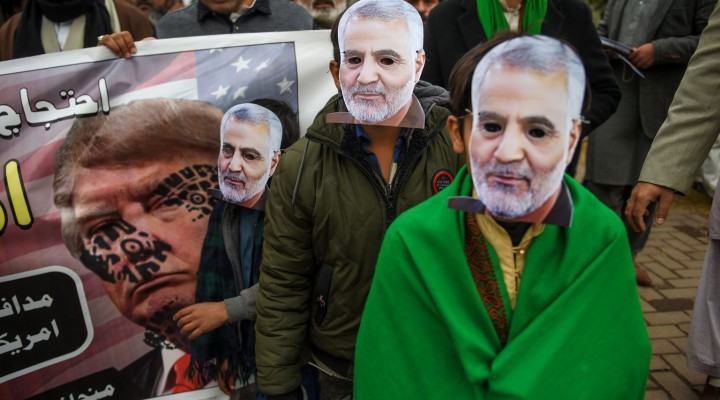 We should have never taken the Soleimani assassination story at face value. Here’s why.

President Trump’s decision to assassinate Qassem Soleimani back in January took the United States to the brink of war with Iran.

Trump and his advisors contend that Soleimani’s death was necessary to protect American lives, pointing to a continuum of events that began on December 27, when a rocket attack on an American base in Iraq killed a civilian translator. That in turn prompted U.S. airstrikes against a pro-Iranian militia, Khati’ab Hezbollah, which America blamed for the attack. Khati’ab Hezbollah then stormed the U.S. embassy in Baghdad in protest. This reportedly triggered the assassination of Soleimani and a subsequent Iranian retaliatory missile strike on an American base in Iraq. The logic of this continuum appears consistent except for one important fact—it is all predicated on a lie.

On the night of December 27, a pickup truck modified to carry a launchpad capable of firing 36 107mm Russian-made rockets was used in an attack on a U.S. military compound located at the K-1 Airbase in Iraq’s Kirkuk Province. A total of 20 rockets were loaded onto the vehicle, but only 14 were fired. Some of the rockets struck an ammunition dump on the base, setting off a series of secondary explosions. When the smoke and dust cleared, a civilian interpreter was dead and several other personnel, including four American servicemen and two Iraqi military, were wounded. The attack appeared timed to disrupt a major Iraqi military operation targeting insurgents affiliated with ISIS.

The area around K-1 is populated by Sunni Arabs, and has long been considered a bastion of ISIS ideology, even if the organization itself was declared defeated inside Iraq back in 2017 by then-prime minister Haider al Abadi. The Iraqi counterterrorism forces based at K-1 consider the area around the base an ISIS sanctuary so dangerous that they only enter in large numbers.

For their part, the Iraqis had been warning their U.S. counterparts for more than a month that ISIS was planning attacks on K-1. One such report, delivered on November 6, using intelligence dating back to October, was quite specific: “ISIS terrorists have endeavored to target K-1 base in Kirkuk district by indirect fire (Katyusha rockets).”

Another report, dated December 25, warned that ISIS was attempting to seize territory to the northeast of K-1. The Iraqis were so concerned that on December 27, the day of the attack, they requested that the U.S. keep functional its tethered aerostat-based Persistent Threat Detection System (PTSD)—a high-tech reconnaissance balloon equipped with multi-mission sensors to provide long endurance intelligence, surveillance, reconnaissance (ISR) and communications in support of U.S. and Iraqi forces.

Instead, the U.S. took the PTSD down for maintenance, allowing the attackers to approach unobserved.

The Iraqi military officials at K-1 immediately suspected ISIS as the culprit behind the attack. Their logic was twofold. First, ISIS had been engaged in nearly daily attacks in the area for over a year, launching rockets, firing small arms, and planting roadside bombs. Second, according to the Iraqis, “The villages near here are Turkmen and Arab. There is sympathy with Daesh [i.e., ISIS] there.”

As transparent as the Iraqis had been with the U.S. about their belief that ISIS was behind the attack, the U.S. was equally opaque with the Iraqis regarding whom it believed was the culprit. The U.S. took custody of the rocket launcher, all surviving ordnance, and all warhead fragments from the scene.

U.S. intelligence analysts viewed the attack on K-1 as part of a continuum of attacks against U.S. bases in Iraq since early November 2019. The first attack took place on November 9, against the joint U.S.-Iraqi base at Qayarrah, and was very similar to the one that occurred against K-1—some 31 107mm rockets were fired from a pickup truck modified to carry a rocket launchpad. As with K-1, the forces located in Qayarrah were engaged in ongoing operations targeting ISIS, and the territory around the base was considered sympathetic to ISIS. The Iraqi government attributed the attack to unspecified “terrorist” groups.

The U.S., however, attributed the attacks to Khati’ab Hezbollah, a Shia militia incorporated with the Popular Mobilization Organization (PMO), a pro-Iranian umbrella organization that had been incorporated into the Iraqi Ministry of Defense. The PMO blamed the U.S. for a series of drone strikes against its facilities throughout the summer of 2019. The feeling among the American analysts was that the PMO attacked the bases as a form of retaliation.

The U.S. launched a series of airstrikes against Khati’ab Hezbollah bases and command posts in Iraq and Syria on December 29, near the Iraqi city of al-Qaim. These attacks were carried out unilaterally, without any effort to coordinate with America’s Iraqi counterparts or seek approval from the Iraqi government.

Khati’ab Hezbollah units had seized al-Qaim from ISIS in November 2017, and then crossed into Syria, where they defeated ISIS fighters dug in around the Syrian town of al-Bukamal. They were continuing to secure this strategic border crossing when they were bombed on December 29.

Left unsaid by the U.S. was the fact that the al-Bukamal-al Qaim border crossing was seen as a crucial “land bridge,” connecting Iran with Syria via Iraq. Throughout the summer of 2019, the U.S. had been watching as Iranian engineers, working with Khati’ab Hezbollah, constructed a sprawling base that straddled both Iraq and Syria. It was this base, and not Khati’ab Hezbollah per se, that was the reason for the American airstrike. The objective in this attack was to degrade Iranian capability in the region; the K-1 attack was just an excuse, one based on the lie that Khati’ab Hezbollah, and not ISIS, had carried it out.

The U.S. had long condemned what it called Iran’s “malign intentions” when it came to its activities in Iraq and Syria. But there is a world of difference between employing tools of diplomacy to counter Iranian regional actions and going kinetic. One of the reasons the U.S. has been able to justify attacking Iranian-affiliated targets, such as the al-Bukamal-al-Qaim complex and Qassem Soleimani, is that the Iranian entity associated with both—the Islamic Revolutionary Guard Corps, or IRGC—has been designated by the U.S. as a Foreign Terrorist Organization (FTO), and as such military attacks against it are seen as an extension of the ongoing war on terror. Yet the way the IRGC came to be designated as an FTO is itself predicated on a lie.

The person responsible for this lie is President Trump’s former national security adviser John Bolton, who while in that position oversaw National Security Council (NSC) interagency policy coordination meetings at the White House for the purpose of formulating a unified government position on Iran. Bolton had stacked the NSC staff with hardliners who were pushing for a strong stance. But representatives from the Department of Defense often pushed back. During such meetings, the Pentagon officials argued that the IRGC was “a state entity” (albeit a “bad” one), and that if the U.S. were to designate it as a terrorist group, there was nothing to stop Iran from responding by designating U.S. military personnel or CIA officers as terrorists.

The memoranda on these meetings, consisting of summaries of the various positions put forward, were doctored by the NSC to make it appear as if the Pentagon agreed with its proposed policy. The Defense Department complained to the NSC that the memoranda produced from these meetings were “largely incorrect and inaccurate”—“essentially fiction,” a former Pentagon official claimed.

After the Pentagon “informally” requested that the NSC change the memoranda to accurately reflect its position, and were denied, the issue was bumped up to Undersecretary of Defense John Rood. He then formally requested that the memoranda be corrected. Such a request was unprecedented in recent memory, a former official noted. Regardless, the NSC did not budge, and the original memoranda remained as the official records of the meetings in question.

This was a direct result of the bureaucratic dishonesty of John Bolton. Such dishonesty led to a series of policy decisions that gave a green light to use military force against IRGC targets throughout the Middle East. The rocket attack against K-1 was attributed to an Iranian proxy—Khati’ab Hezbollah—even though there was reason to believe the attack was carried out by ISIS. This was a cover so IRGC-affiliated facilities in al-Bakumal and al-Qaim, which had nothing to do with the attack, could be bombed. Everything to do with Iran’s alleged “malign intent.” The U.S. embassy was then attacked. Soleimani killed. The American base at al-Assad was bombarded by Iranian missiles. America and Iran were on the brink of war.

All because of a lie.