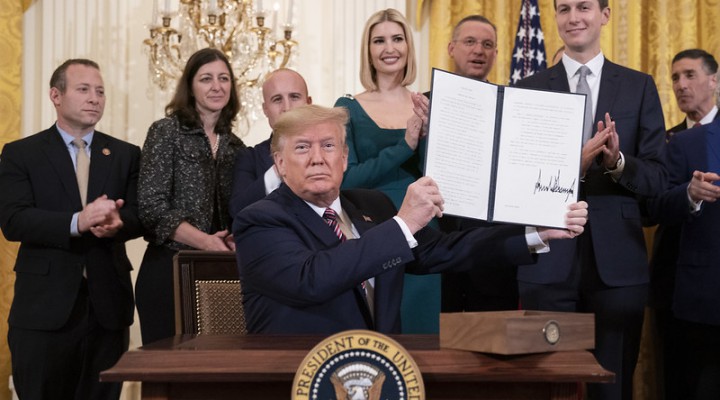 The pandering by Donald Trump and those around him to Israel and to some conservative American Jews is apparently endless. Last Wednesday the president signed an executive order that is intended to address alleged anti-Semitism on college campuses by cutting off funds to those universities that do not prevent criticism of Israel. To provide a legal basis to defund, the administration is relying on title VI of the Civil Rights Act of 1964, which prohibits any discrimination based on race, color or national origin. Since the Act does not include religion, Trump’s order is declaring ipso facto that henceforth “Jewishness” is a nationality.

The executive order does not mention Israel by name, but it does state that its assumptions are based on “the non-legally binding working definition of anti-Semitism adopted on May 26, 2016, by the International Holocaust Remembrance Alliance (IHRA), which states, ‘Antisemitism is a certain perception of Jews, which may be expressed as hatred toward Jews. Rhetorical and physical manifestations of antisemitism are directed toward Jewish or non-Jewish individuals and/or their property, toward Jewish community institutions and religious facilities’; and (ii) the ‘Contemporary Examples of Anti-Semitism’ identified by the IHRA, to the extent that any examples might be useful as evidence of discriminatory intent.”

The IHRA “contemporary examples” supplementing the basic description are important. They considerably broaden the definition of anti-Semitism, to include “Accusing Jewish citizens of being more loyal to Israel, or to the alleged priorities of Jews worldwide, than to the interests of their own nations” and “claiming that the existence of a State of Israel is a racist endeavor.” The examples also included holding Israel to a higher standard than other nations when criticizing it, and IHRA offers no possible mitigation even if the accusations are, in the case of the behavior of some Jews and of Israel, accurate.

Those who are confused because in the past expressions like “Italian” or “Irish” or “British” meant actual countries should recognize that Trump-speak never respects any connection with reality when there is political advantage just sitting out there waiting to be snatched and exploited. And that imperative is considerably multiplied when one is referring to either the state of Israel or of Jews in general, particularly as seen by the Trump White House, which clearly and repeatedly sends the message that it reveres both. Trump’s order will in effect constitute a government-promoted argument that Jews are a people or a race with a collective national origin, like Italian or Polish Americans, an assertion that clearly is untrue.

In fact, suppressing criticism of Israel on college campuses using a  has long been a major foreign policy objective of the Israeli government even though nonviolent assembly and free speech are guaranteed by the U.S. Constitution. Congress has several times considered a comprehensive Anti-Semitism Awareness Act, though it has not passed due to legitimate free speech concerns. The nonviolent Boycott, Divestment and Sanctions movement (B.D.S.), which is very active on American campuses, has been particularly targeted and criticism of it is frequent in the media and from Congress while also emanating from the White House. As most accredited colleges receive federal funding, which can be considerable at a major research university, the executive order will create a major dilemma over how to respond, particularly for those schools that have Middle East study programs.

Work on the presidential executive order was initiated in the summer inside the White House by a team led by Jared Kushner, Trump’s son-in-law and senior adviser, together with his close aide special assistant to the president Avi Berkowitz. They sought to develop a formula whereby government policy would equate anti-Zionism with anti-Semitism, and Donald Trump both agreed with that assessment and followed through on it. On December 8th he promised to take action against B.D.S. and other critics in a speech delivered before the Israeli-American Council. The speech is worth reading in full by anyone who is concerned that the United States now has a government that favors one already privileged, wealthy and powerful constituency in particular and is not committed to upholding the civil liberties of all Americans.

Israel is an apartheid state. Covering up for its crimes against humanity as well as its war crimes is something of a growth industry in the United States, with Zionist billionaire oligarchs launching new foundations on a regular basis. Jewish power in the U.S. means that Israel always has been given a pass, even when it deliberately attacked and sought to sink the U.S.S. Liberty, an American Naval vessel in international waters in 1967. Thirty-four crewman died in the assault. The subsequent investigation of the attack was whitewashed by the president, secretary of state and the Navy department while the survivors were threatened with imprisonment if they revealed what had occurred. That is how a powerful and ruthless Israel acting through its traitorous domestic proxies operates and it illustrates how feeble the Establishment is in standing up to it.

This latest outrage, in which free speech and association will be denied to benefit one group on the basis of its claimed perpetual victimhood, had its genesis earlier this year when the federal government’s Education Department ordered Duke University and the University of North Carolina at Chapel Hill to reorganize the Consortium for Middle East Studies program run jointly by the two colleges in part based on their failure to include enough “positive” content relating to Judaism. The demand came with a threat to suspend federal funding of Title VI Higher Education Act international studies and foreign language grants to the two schools if the curriculum were not changed.

The Education Department was particularly irate over a conference in March called “Conflict Over Gaza: People, Politics and Possibilities.” A Republican congressman was outraged by the development and asked Secretary DeVos to investigate because the gathering was full of “radical anti-Israel bias.”

Coverage of the story revealed that “Betsy DeVos, the education secretary, has become increasingly aggressive in going after perceived anti-Israel bias in higher education.” Her deputy who has served as a focal point for the effort to root out anti-Israel sentiment is Assistant Secretary of Civil Rights Kenneth L. Marcus, who might reasonably be described as “a career pro-Israel advocate,” the founder and president of the Louis D. Brandeis Center for Human Rights Under Law, which he has used to exclusively defend the rights of Jewish groups and individuals against BDS and other manifestations of Palestinian pushback against the Israeli occupation of their country. He has not hesitated to call opponents anti-Semites and has worked with Jewish students to file civil rights complaints against college administrations, including schools in Wisconsin and California. In an op-ed that appeared, not surprisingly, in The Jerusalem Post, he observed that even when student complaints were rejected, they created major problems for the institutions involved. “If a university shows a failure to treat initial complaints seriously, it hurts them with donors, faculty, political leaders and prospective students.”

Last year Kenneth Marcus reopened an investigation into alleged anti-Jewish bias at Rutgers University that the Obama Administration had closed after finding that the charges were baseless. Marcus indicated that the re-examination was called for as his office in the Education Department would henceforth be using the IHRA-derived State Department definition of anti-Semitism that also includes “denying the Jewish people their right to self-determination,” making virtually all criticism of Israel a civil rights violation or even a hate crime.

Critics of the Trump move, many of whom are themselves Jewish, are uncomfortable with being placed by government into one category, noting inter alia that ALL students are de facto already protected by Title VI, which has been interpreted as making all forms of discrimination illegal. And they also note that the law was never intended to protect individuals whose feelings were hurt or who claim to be unwelcome or even threatened by someone saying something that they disapprove of. Since such protection is clearly the intention of the executive order, it is undeniable that the Trump’s latest ploy is little more than a mechanism to pressure colleges into effectively banning B.D.S. and other groups critical of Israel.

And the order itself raises at least one unpleasant thought: if “Jewishness” is a nation even though it is demonstrably not one, what is the alleged Jewish nationality all about? Is this just one more example of the politics of Jewish identity or is it really some form of dual loyalty, with American Jews divided between those who are loyal to the U.S. and those who are loyal to some supra-nationality or allegiance? The fact is, that Donald Trump himself has several times expressed the view that American Jews, particularly those who are politically liberal, should be more loyal to Israel.

Trump’s maneuver is unfortunately part of a well-funded and highly coordinated federal and state campaign to pass laws . And the issue has also . Speaker Nancy Pelosi  after she criticized proposed anti-boycott legislation. More recently Bernie Sanders  even though he is Jewish because he associates with critics of Israel and has spoken out in favor of defending free speech while also supporting Palestinian rights.

There is a certain irony in all of this political theater, that the wealthiest and most powerful identifiable group in the United States should yet again be playing the victim is in itself astonishing. And making it a crime to deny Israel legitimacy while at the same time denying the same thing to Palestinians should give anyone pause.

And there is also considerable hypocrisy in that pro-Israel groups on campus have been if anything better funded and more aggressive in promoting their point of view than B.D.S. has been without any consequences. , for example, claims to “document people and groups that promote hatred of the U.S.A., Israel and Jews on North American college campuses” by posting their names, photos and personal information on its website. Israeli-American real estate investor and billionaire Adam Milstein is reported to be  while the site’s listings have been allegedly used by the Israeli border security officials to deny entry to pro-B.D.S. American citizens and also with potential employers to deny applicants jobs.

So here we are again. Special privileges for the perpetual victims. And no one in the media is willing to tell it like it is, while the handful of meek voices in congress have been effectively silenced. So sad, particularly as an election year is coming up and there will undoubtedly be much more of this. When the Israelis occupy nearly all of the West Bank with Donald Trump’s approval and start “relocating” the existing population, who will be around to speak up? No one, as by that time saying nay to Israel will be a full-fledged hate crime and you can go to jail for doing so.

*(Top image: President Donald J. Trump displays his signature on an Executive Order committing his administration to combating the rise of anti-Semitism everywhere and anywhere it appears, Wednesday, Dec. 11, 2019, during an afternoon Hanukkah Reception in the East Room of the White House. Credit: Joyce N Boghosian/ The White House)