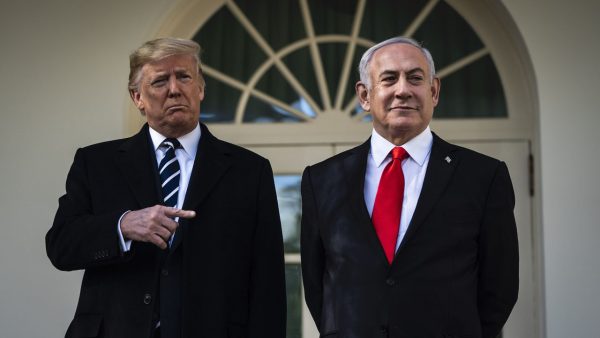 “Check out any time you like, but you can never leave”

For many years the security framework in the Middle East has been described as a bilateral arrangement whereby Washington gained access to sufficient Saudi Arabian oil to keep the energy market stable while the United States provided an armed physical presence through its bases in the region and its ability to project power if anyone should seek to threaten the Saudi Kingdom. The agreement was reportedly worked out in a February 1945 meeting between President Franklin D. Roosevelt and King Abdul Aziz ibn Saud, just as World War 2 was drawing to a close. That role as protector of Saudi Arabia and guarantor of stable energy markets in the region later served as part of the justification for the U.S. ouster of the Iraqi Army from Kuwait in 1991.

After 9/11, the rationale became somewhat less focused. The United States invaded Afghanistan, did not capture or kill Osama bin Laden due to its own incompetence, and, rather than setting up a puppet regime and leaving, settled down to a nineteen-years long and still running counter-insurgency plus training mission. Fake intelligence produced by the neocons in the White House and Defense Department subsequently implicated Iraq in 9/11 and led to the political and military disaster known as the Iraq War.

During the 75 years since the end of the Second World War the Middle East has experienced dramatic change, to include the withdrawal of the imperial European powers from the region and the creation of the State of Israel. And the growth and diversification of energy resources mean that it is no longer as necessary to secure the petroleum that moves in tankers through the Persian Gulf. Lest there be any confusion over why the United States continues to be involved in Syria, Iraq, the Emirates and Saudi Arabia, President Donald Trump remarkably provided some clarity relating to the issue when on September 8th he declared that the U.S. isn’t any longer in the Middle East to secure oil supplies, but rather because we “want to protect Israel.”

The comment was made by Trump during a rally in Winston-Salem, N.C. as part of a boast about his having reduced energy costs for consumers. He said “I like being energy independent, don’t you? I’m sure that most of you noticed when you go to fill up your tank in your car, oftentimes it’s below two dollars. You say how the hell did this happen?… While I’m president, America will remain the number one producer of oil and natural gas in the world. We will remain energy independent. It should be for many many years to come. The fact is, we don’t have to be in the Middle East, other than we want to protect Israel. We’ve been very good to Israel. Other than that, we don’t have to be in the Middle East.”

The reality is, of course, that U.S. foreign policy in the Middle East has been all about Israel for a very long time, at least since the presidency of Bill Clinton, who has been sometimes dubbed the first Jewish president for his deference to Israeli interests. The Iraq War is a prime example of how neoconservatives and Israel Firsters inside the United States government conspired to go to war to protect the Jewish State. In key positions at the Pentagon were Zionists Paul Wolfowitz and Douglas Feith. Feith’s Office of Special Plans developed the “alternative intelligence” linking Saddam Hussein to al-Qaeda and also to a mythical nuclear program that was used to justify war. Feith was so close to Israel that he partnered in a law firm that had an office in Jerusalem. The fake intelligence was then stove-piped to the White House by fellow neocon “Scooter” Libby who worked in the office of Vice President Dick Cheney.

After the fact, former Secretary of State Colin Powell also had something to say about the origins of the war, commenting that the United States had gone into Iraq because Secretary of Defense Donald Rumsfeld bought into the neoconservative case made for doing so by “the JINSA crowd,” by which he meant the Israel Lobby organization the Jewish Institute for National Security Affairs.

And if any more confirmation about the origins of the Iraq War were needed, one might turn to Philip Zelikow, who was involved in the planning process while working on the staff of Condoleezza Rice. He said “The unstated threat. And here I criticize the [Bush] administration a little, because the argument that they make over and over again is that this is about a threat to the United States. And then everybody says: ‘Show me an imminent threat from Iraq to America. Show me, why would Iraq attack America or use nuclear weapons against us?’ So I’ll tell you what I think the real threat is, and actually has been since 1990. It’s the threat against Israel. And this is the threat that dare not speak its name, because the Europeans don’t care deeply about that threat, I will tell you frankly. And the American government doesn’t want to lean too hard on it rhetorically, because it’s not a popular sell.”

So here is the point that resonates: even in 2002-3, when the Israel Lobby was not as powerful as it is now, the fact that the U.S. was going to war on a lie and was actually acting on behalf of the Jewish State was never presented in any way to the public, even though America’s children would be dying in the conflict and American taxpayers would be footing the bill. The media, if it knew about the false intelligence, was reliably pro-Israel and helped enable the deception.

And that same deception continued to this day until Trump spilled the beans earlier this month. And now, with the special security arrangement that the U.S. has entered into with Israel, the United Arab Emirates and Bahrain, the ability to exit from a troublesome region that does not actually threaten American interests has become very limited. As guarantor of the agreement, Washington now has an obligation to intervene on the behalf of the parties involved. Think about that, a no-win arrangement that will almost certainly lead to war with Iran, possibly to include countries like Russia and China that will be selling it military equipment contrary to U.S. “sanctions.”