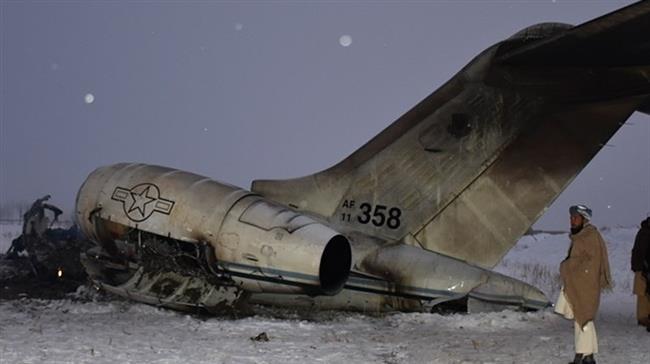 U.S. forces were hampered by weather, Taliban gunfire and terrain from reaching the site of the crash for more than 24 hours, and the lack of any kind of definitive commentary from Washington gave the story legs. Given the news vacuum on the story, the Iranian account was picked up throughout the Middle East, to include photos allegedly taken of the downed plane and of burned corpses. Russian Media also featured the story and it was eventually even reported, though with some editorial skepticism, by the Independent and Daily Mail in the United Kingdom.

The Pentagon eventually issued a brief report that the crash appeared to be accidental, perhaps due to weather, and stated still later that the pilot and co-pilot, both Air Force officers, had been killed. The statement to the media did not explicitly say whether or not there was anyone else on board the plane, which is capable of carrying additional crewmen and passengers. The C.I.A. refused to comment. Fully forty-eight hours after the crash the Pentagon released a second statement confirming that the two crewmen were Lt. Col. Paul K. Voss, 46, of Yigo, Guam; and Capt. Ryan S. Phaneuf, 30, of Hudson, New Hampshire.

The mainstream media in the U.S. dutifully replayed the government version of what had occurred, but that did not stop a wave of speculation regarding a possible cover-up. Some reasoned that the Iranians, who are cooperating with the Taliban against U.S. forces, seemed to be on top of the story first, indicating that they might have known what occurred in real time because they had been in the loop with the Taliban armed unit that may have shot the aircraft down using a Russian produced portable anti-aircraft missile launcher.

Many who were following the story were inclined to believe the account circulated by Iran and other media outlets because the United States has a recent track record of lying about nearly everything, including the “imminent threat” details of its recent assassination of Iranian Major General and Quds Force commander Qassem Soleimani. The U.S. also lied when it claimed that there had been no casualties among American forces after Iran struck back against two bases in Iraq and many observers are quick to note that the United States has as its Chief Executive a man who calls journalists the “enemy of the people” and who is constantly claiming that there exists a huge reservoir of “fake news.”

So, another lie by the Pentagon in reporting the possibly successful attempt to kill a senior C.I.A. officer would be expected by nearly everyone, which is not to suggest that the Iranian account was necessarily true or accurate in all details. Iran would have had plenty of motive to create confusion about the United States and what it was doing in Afghanistan, particularly if the implication is that Afghanistan was being used as a launching pad to destabilize or even attack Iran, with which Kabul is not at war.

The White House and Agency have neither confirmed nor denied that the C.I.A. Chief of the Iran Mission Center Michael D’Andrea is still alive. He has in any event an interesting history. He is apparently a near contemporary of mine though I did not know him and do not know if that is his true name. As he is reported to be under cover, the fact that a name has surfaced at all is due to investigative reporting on him in the U.S. media. A former chief of the CI.A.’s Counter Terrorism Center, he was appointed to his current position by then Agency Director Mike Pompeo in June 2017. The New York Times reported that his appearance on the scene would mean a much harder line in opposing Iran on the part of the Trump Administration.

Within the Agency, D’Andrea was reportedly referred to as the Dark Prince or Ayatollah Mike, nicknames he acquired while heading the search for Usama bin Laden and also while directed drone strikes against al-Qaeda targets in Afghanistan, Pakistan, Syria, Yemen and Iraq. As a chain-smoking observant convert to Islam, he is not your conventional Agency officer, many of whom are more comfortable working inside from an Embassy desk rather than from a helicopter. A workaholic who keeps a roll away bed in his office, D’Andrea is, as a result of his abrasive style, reportedly extremely difficult to work with and not terribly popular.

One might also speculate that the claimed killing of D’Andrea is something like a half truth that might be construed as a warning. The C.I.A. officer might still be alive, but it is completely possible that the tale of his death was something of a contrivance to serve as a warning coming from the Iranian government suggesting that if the American government can kill senior Iranian officials, American senior officials might likewise also be targeted.

Even if D’Andrea was not on the plane, he just might come to the conclusion that his movements were being monitored. U.S. bases overseas are full of local employees who are engaged in menial tasks like driving or cleaning and even for perimeter and other basic security. Any number of them might be reporting on the movement of important Americans to the Taliban and other interested parties. D’Andrea and other senior U.S. government officials will inevitably have to think twice and increase their security arrangements when next they venture forth. And even an obstinate White House will perhaps begin to think that killing men like Qassem Soleimani is not a good idea because if we continue to do it to “them,” “they” will turn around and do it to us.

0 thoughts on “The Mysterious Michael D’Andrea: Was the C.I.A.’s Iran Mission Center Chief Shot Down?”