The Memorials to Judah Benjamin 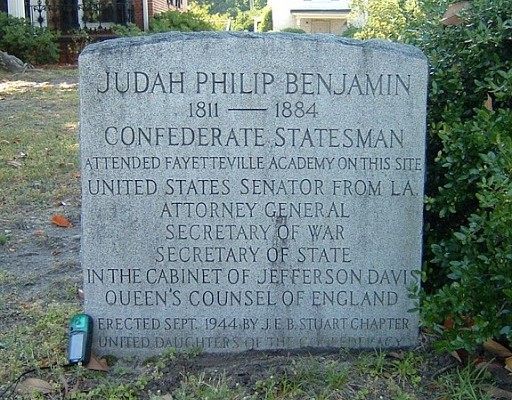 The current wrath directed against anything or anyone having had anything to do with slavery or even racial discrimination includes destroying historical memorials and monuments as well as changing names that have stood for more than a century. Much of it has been focused on white nominally Christian males, mostly of Anglo-Saxon stock, understandable as the United States was a child of Great Britain and a majority of the country’s leaders for nearly two centuries came from families descended from the British Isles.

Slavery in the United States version is, of course, seen in black and white terms but slavery in a broader historical context is much more complicated. There have been slaves since ancient times through the eighteenth century in many countries and most of them have been white. Sometimes they were called something different. Indentured servants were de facto slaves, as were the serfs in Russia, who were tied to the land and were not liberated until 1861.

The very word slave comes from Slav, as many of the slaves in the Middle Ages were from the Slavic parts of the Balkans bordering on the Adriatic, where mostly Muslim seagoing raiders would attack coastal villages and carry off the inhabitants. Italy was likewise afflicted and the numerous small castles and improvised forts along the Italian and Croatian coastlines were intended to providing a refuge for villagers against the corsair slavers.

In the United States currently progressives of all types and colors are flocking to the revolutionary banner hoisted by Black Lives Matter (BLM) and other associated groups. Not surprisingly, given the liberal leanings of American Jews as well as their historical connections, Jewish groups have been actively engaged in the ongoing movement for racial justice. American Jews have played major roles historically in the founding and financial support of some of the most important civil rights organizations, including the National Association for the Advancement of Colored People (NAACP), the Southern Christian Leadership Conference (SCLC) and the Student Nonviolent Coordinating Committee (SNCC). In 1909, Henry Moscowitz was a co-founder the NAACP. Photos of the boards of directors of the various organizations well into the 1970s frequently reveal a majority of white Jews seated together with minority blacks. Kivie Kaplan was, for example, the national president of the NAACP between 1966 and 1975.

But this characterization of Jews as benefactors for the civil rights movement has also produced some curious omissions in the accepted historical narrative of who did what to whom in the slavery trade. It is well established, though never taught in schools, that Jews from Britain and Holland were involved in the African slave trade that prevailed after the European discovery of the Americas. In the United States, concentrations of Jews in the American south were in slave trading centers, notably in Charleston South Carolina, Savannah Georgia, Richmond Virginia and in New Orleans Louisiana. Many of the Jews themselves owned slaves.

The debate over Jewish involvement in both the business side of the slave trade as well as in actually possessing slaves comes down to “proportionality.” As the historical record makes clear that Jews in the south were engaged in both the importing and selling slaves as well as exploiting slave labor, the question becomes whether they were central to the process or just one of many identifiable groups that were peripherally involved in what was a major segment of the southern economy. The issue became extremely heated in the 1990s when mostly black academics argued that the Jewish role was pivotal while mostly Jewish professors responded that it was insignificant. In March 1995 the American Historical Association (AHA) got involved by issuing its first ever “policy resolution”, coming strongly down on the Jewish side of the argument, which should surprise no one. AHA argued that it was wrong to use historical analysis to vilify one group before citing a memo by two Jewish professors which asserted that the role of their co-religionists had been marginal.

For those who are interested in more on the discussion, the following article might be helpful, though it is on a Jewish website, cites only Jewish sources for it debunking of the idea that Jews might have been heavily engaged in the slave trade, and also brings in the most disreputable sources that say the contrary. It nevertheless concedes that Jews were involved in the slave trade and also possessed slaves, though it seeks to minimize the extent to which that was true. Much more interesting is a short book by a distinguished Wellesley History Professor Tony Martin “The Jewish Onslaught: Despatches from the Wellesley Battlefront.” Martin describes in some detail how he was subjected to a “hysterical campaign” by Jewish organizations and fellow academics to have him discredited and fired after he assigned to his class on African-American history a short reading on the Jewish role in antebellum slavery.

Be that as it may, everyone should be aware that delving around in the past can be a messy business with no easy answers and little in the way of lines drawn between right and wrong. But in this case, the current unrest brings one around to a chap named Judah Benjamin. Judah was born in the West Indies to a British-Jewish family before winding up in Charleston and eventually New Orleans, where he became a lawyer and made a fortune. He was elected to the U.S. Senate from Louisiana. Among other investments, he owned a sugar cane plantation that included 140 slaves.

When the Confederacy fell, Benjamin fled to London and eventually to Paris, where he rebuilt his fortune by again practicing law. Benjamin died in Paris in 1884 at the age of 72. He was buried in the Paris Père Lachaise cemetery with a simple headstone inscribed “Phillipe Benjamin.” In 1936, the United Daughters of the Confederacy paid for a monument to be placed over his grave.

So, the question becomes, with BLM and other wreckers trying to destroy America’s historical monuments, to include those commemorating the Founding Fathers, Union Commander Ulysses S. Grant, Abraham Lincoln, Christopher Columbus, Catholic saint Junipero Serra and even abolitionist Hans Christian Heg, why is it that Judah Benjamin has somehow been missed? He was a slave owner and worked as a lawyer in New Orleans where there was a thriving slave market as well as an economy built around cotton exports, which were driven by slave labor. He eventually became the number two man in the southern Confederacy, which is being regularly denounced as fighting a war to maintain slavery.

Well, of course the answer is quite simple. No politician or journalist who wants to stay employed would dare to publicly link Jews and slavery. BLM is also extravagantly funded by various guilt ridden foundations and other folks who are no doubt sensitive to the fact that there are certain issues that cannot be raised, and the people with their hands out know perfectly well what they can and cannot do or say to keep the money flowing.

For what it’s worth, there are a few monuments to Judah Benjamin sitting around just waiting to be trashed. In 1948, Charlotte, North Carolina’s two Jewish congregations, Temple Israel and Temple Bethel, erected a marker on South Tyron Street at the site of the demolished house of merchant Abraham Weil where Judah Benjamin and Jefferson Davis found shelter in April 1865 as they fled the northern army. To their credit, the congregations are now seeking to have the memorial removed.

Also of note is the 5-foot-high pink marble column topped by a sundial located in Sarasota, Florida at the point where Benjamin escaped from the United States. The monument is inscribed “Near this spot on June 23, 1865, Judah P. Benjamin, Secretary of State of the United Confederacy, set sail for a foreign shore.”

Yet another stone marker is located at 9 West Main Street in Richmond, Virginia, identifying the location of Benjamin’s residence during the Civil War. Another stone marker can be found in Fayetteville, North Carolina. It recalls how Benjamin “attended Fayetteville Academy on this site.” There is still another stone monument in Bradenton Florida erected by the Judah P. Benjamin chapter of the Daughters of the Confederacy and in North Carolina there is a Highway Historical Marker Program plaque that marks the site of Benjamin’s no longer existing boyhood home.

But the most impressive historic site commemorating Benjamin’s legacy is the Judah P. Benjamin Confederate Memorial at Gamble Plantation in the town of Ellenton, Florida, south of St. Petersburg. The historic site is maintained as a state park by the Florida Department of Natural Resources and also by the Judah P. Benjamin Chapter No. 1545 of the United Daughters of the Confederacy. It is the only surviving antebellum plantation in central and south Florida and includes the mansion and gardens as well as a visitors’ center. A large bronze memorial plaque commemorates Benjamin. Nevertheless, the connection with Benjamin is admittedly tenuous as he only sought refuge there briefly in 1865 during his flight to England.

0 thoughts on “The Memorials to Judah Benjamin”