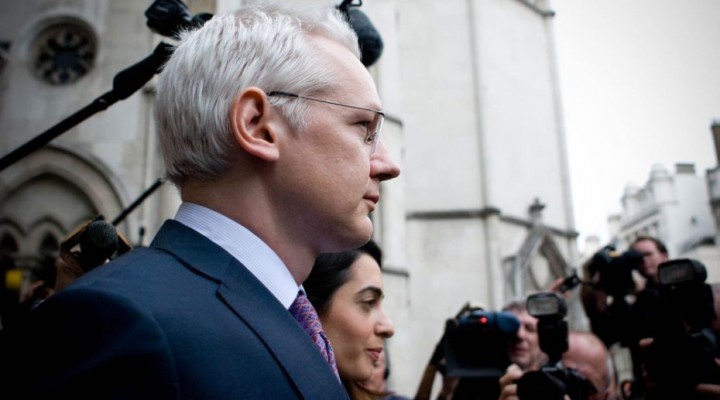 Many observers are citing Assange’s case as symptomatic of developing “police state” tendencies in both the United States and in Europe.

The hideous treatment of WikiLeaks founder Julian Assange continues and many observers are citing his case as being symptomatic of developing “police state” tendencies in both the United States and in Europe, where rule of law is being subordinated to political expediency.

Julian Assange was the founder and editor-in-chief of the controversial news and information site WikiLeaks. As the name implies, after 2006 the site became famous, or perhaps notorious, for its publication of materials that have been leaked to it by government officials and other sources who consider the information to be of value to the public but unlikely to be accepted by the mainstream media, which has become increasingly corporatized and timid.

WikiLeaks became known to a global audience back in 2010 when it obtained from US Army enlisted soldier Bradley Manning a large quantity of classified documents relating to the various wars that the United States was fighting in Asia. Some of the material included what might be regarded as war crimes.

WikiLeaks again became front page news over the 2016 presidential election, when the website released the emails of candidate Hillary Clinton and her campaign manager John Podesta. The emails revealed how Clinton and her team collaborated with the Democratic National Committee to ensure that she would be nominated rather that Bernie Sanders. It should be noted that the material released by WikiLeaks was largely documentary and factual in nature, i.e. it was not “fake news.”

Because he is a journalist ostensibly protected by the First Amendment guarantee of free speech, the handling of the “threat” posed by journalist Assange is inevitably somewhat different than a leak by a government official, referred to as a whistleblower. Assange has been vilified as an “enemy of the state,” likely even a Russian agent, and was initially pursued by the Swedish authorities after claims of a rape, later withdrawn, were made against him. To avoid arrest, he was given asylum by a friendly Ecuadorean government seven years ago in London. The British police had an active warrant to arrest him immediately as he had failed to make a bail hearing after he obtained asylum, which is indeed what took place when Quito revoked his protected status in April.

As it turned out, Julian Assange was not exactly alone when he was in the Ecuadorean Embassy. All of his communications, including with his lawyers, were being intercepted by a Spanish security company hired for the purpose allegedly by the CIA. There apparently was also a CIA plan to kidnap Assange. In a normal court in a normal country, the government case would have been thrown out on constitutional and legal grounds, but that was not so in this instance. The United States has persisted in its demands to obtain the extradition of Assange from Britain and London seems to be more than willing to play along. Assange is undeniably hated by the American political Establishment and even much of the media in bipartisan fashion, with the Democrats blaming him for Hillary Clinton’s loss while Secretary of State Mike Pompeo has labeled him a “fraud, a coward and an enemy.” WikiLeaks itself is regarded by the White House as a “hostile non-government intelligence service.” Sending Julian Assange to prison for the rest of his life may be called justice, but it is really revenge against someone who has exposed government lies. Some American politicians have even asserted that jail is too good for Assange, insisting that he should instead be executed.

The actual charges laid out in the US indictment are for alleged conspiracy with Chelsea Manning to publish the “Iraq War Logs,” the “Afghan War Logs” and the US State Department cables. On May 23rd, the United States government further charged Assange with violating the Espionage Act of 1917, which criminalizes any exposure of classified US government information anywhere in the world by anyone. Its use would create a precedent: any investigative journalist who exposes US government malfeasance could be similarly charged.

Assange is currently incarcerated in solitary confinement at high-security Belmarsh prison. It is possible that the Justice Department, after it obtains Assange through extradition, will attempt to make the case that Assange actively colluded with the Russian government, a conspiracy to “defraud the United States” to put it in legalese. Assange is unlikely to receive anything approaching a fair trial no matter what the charges are.

Assange’s prison term ended on September 22nd, but an earlier procedural hearing at Westminster Magistrates’ Court had already decided that a full hearing on extradition to the US would not begin until February 25th, 2020. District Judge Vanessa Baraitser ruled that Assange would not be released even though the prison term had ended, because he was a flight risk. His status in the prison system was duly changed from a serving prisoner to a person facing extradition and his final hearing would be at the high security Belmarsh Magistrates’ Court rather than in a normal civil court. Belmarsh is where terrorists are routinely tried and the proceedings there permit only minimal public and media scrutiny.

Most recently, on October 21st, 2019, Assange was again in Westminster Magistrates’ Court for a “case management hearing” regarding his possible extradition to the US Judge Baraitser denied a defense team request for a three-month delay so that they could gather evidence in light of the fact that Assange had been denied access to his own papers and documents in order to prepare his defense. British government prosecutor James Lewis QC and the five US “representatives” present opposed any delay in the extradition proceedings and were supported by Judge Baraitser, denying any delay in the proceedings.

Another procedural hearing will take place on December 19th followed by the full extradition hearing in February, at which time Assange will presumably be turned over to US Marshalls for transportation to the Federal prison in Virginia to await trial. That is, of course, assuming that he lives that long as his health has visibly deteriorated and there have been claims that he has been tortured by the British authorities.

Former British Ambassador Craig Murray, who knows Julian Assange well, was present when he appeared in court on the 21st. Murray was shocked by Assange’s appearance, noting that he had lost weight and looked like he had aged considerable. He was walking with a pronounced limp and when the judge asked him questions, to include his name and date of birth, he had trouble responding. Murray described him as a “shambling, incoherent wreck” and also concluded that “one of the greatest journalists and most important dissidents of our times is being tortured to death by the state, before our eyes.”

The British court was oblivious to Assange’s poor condition, with Judge Baraitser telling the clearly struggling prisoner that if he were incapable of following proceedings, then his lawyers could explain what had happened to him later. Objections to what was happening made by both Assange and his lawyers were dismissed by the Crown’s legal representatives, often after discussions with the American officials present, a process described in full by Murray, who, after describing the miscarriage of justice he had just witnessed observed that Julian Assange is being “slowly killed in public sight and arraigned on a charge of publishing the truth about government wrongdoing.” He concluded that “Unless Julian is released shortly he will be destroyed. If the state can do this, then who is next?” Indeed.