HOME / Economy / Putin and Xi step up the strategic game 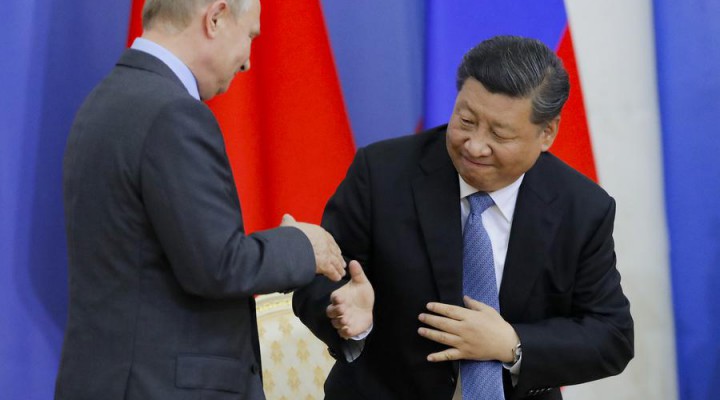 A single image epitomizes the hurricane at the center of the current geopolitical chessboard: an extremely affectionate handshake between Xi Jinping and Vladimir Putin.

The image crystallizes the stuff of nightmares by those in the US that still follow the Eurasian prophecies of Halford Mackinder and his disciples, such as the late Zbigniew “Grand Chessboard” Brzezinski, that focused on the imperative of preventing the emergence of a peer competitor in Eurasia.

The peer competitor has emerged, in full: the Russia-China strategic partnership.

On Wednesday, Xi said at the Kremlin this was his eighth trip to Russia since 2013 – when the New Silk Roads, or Belt and Road Initiative (BRI), were announced. And he added he and Putin had met “almost 30 times” since then.

Among a raft of agreements signed by Putin and Xi, one stands out: the drive to develop bilateral trade and cross-border payments using the ruble and the yuan, bypassing the US dollar. Or, as Putin diplomatically put it, “Russia and China intend to develop the practice of “settlements in national currencies.”

It’s crucial to remember this has been discussed in depth at the BRICS level – and specifically by the Russia-China strategic partnership – since the mid-2000s.

Vast swathes of the Global South are paying attention. Trade balance settlement everywhere is bound to progressively embrace the use of other currencies, not only ruble and yuan.

After their bilateral meeting, Xi warned that “currently, the international situation is experiencing unprecedented, over the centuries, profound changes. Peace and development remain the trends of the time, but raise-your-head protectionism, unilateralism, increasing power politics and hegemonism.”

That’s an understatement. Russia is under harsh US sanctions. China is facing an all-out trade war. The Russia-China strategic partnership is the bête noire of the US National Security Strategy.

Crucially, they’re in sync on Putin’s total support for BRI, as well as the drive to merge BRI and Eurasia Economic Union (EAEU) projects. It’s this interconnection that may solidify Moscow’s aim of configuring Russia as the key Eurasian land bridge.

It’s fitting that Putin and Xi, apart from clinching deals, had so much to discuss in Moscow.

And all this happened before Putin and Xi met top executives of over 50 Russian and 60 Chinese companies attending the second Russian-Chinese Energy Forum, organized by Rosneft and China National Petroleum Corp. And before Putin’s much-awaited speech on the current turbulent geopolitical chessboard, side by side with Xi, at the plenary session of the St Petersburg International Economic Forum (SPIEF) on Friday.

SPIEF is Russia’s top annual business forum. It’s absolutely impossible to understand the nuts and bolts of the complex machinery of progressive Eurasia integration without attending or following SPIEF’s debates and discussions.

2019 is, in so many aspects, The Year of Living Dangerously. The chessboard is totally monopolized by the clash between the US and Russia-China – with the added twist of the Trump administration flirting with a “reverse Nixon” strategy to split Russia from China. So, it’s fitting for Xi to be a guest of honor at SPIEF. And that is only the first of three crucial Xi-Putin meetings this month.

Next week, they meet again in Bishkek for the annual Shanghai Cooperation Organization summit – where topics they discussed in Moscow and St Petersburg will be shared with Central-South Asian nations, including crucial SCO observer Iran.

Arguably the key issue in Bishkek will be how Putin and Xi handle fellow BRICS member India’s Modi, fresh from an electoral victory, and dreaming of a starring role in Washington’s Indo-Pacific strategy – which is essentially yet another “containment of China” mechanism.

And they meet again in Osaka – along with the other BRICS members – on June 28 for the G20 summit.

The St Petersburg meeting this year staged some absolutely essential discussions revolving around Eurasian integration. Most of these issues are simply ignored across the West. Here are just a few examples, which deserve to be closely examined.

• A wide-ranging panel on business/investment across Eurasia, featuring the president of the EAEU’s business council, Viktor Khristenko, the chairman of the management board of the Eurasian Development Bank, Andrey Belyaninov, Russia’s first Deputy Prime Minister Anton Siluanov, and Sberbank’s head of analytical directorate Yaroslav Lissovolik;

The Putin-Xi meetings, the discussions at St Petersburg, and the SCO summit next week, in less than 10 days, fully articulate the road map ahead for Eurasian integration. Over it all hangs the ultimate (economic) paradigm shift: multiple nations getting ready to bypass the US dollar as the world’s reserve currency.

0 thoughts on “Putin and Xi step up the strategic game”