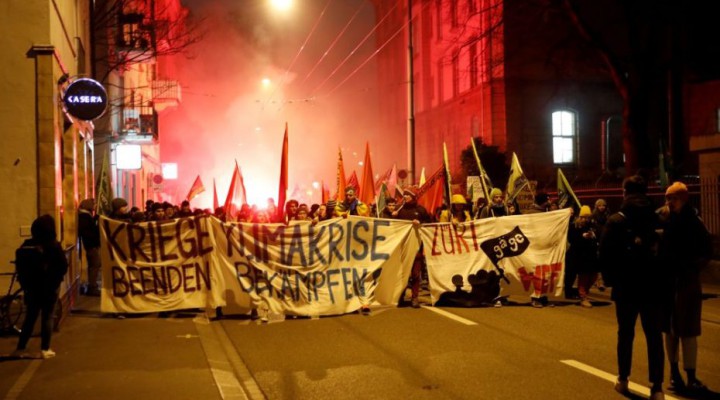 This is our choice: it’s either Neoliberal Restoration or a revolutionary rupture. And nothing in between.

With the specter of a New Great Depression hovering over most of the planet, realpolitik perspectives for a radical change of the political economy framework we live in are not exactly encouraging.

Western ruling elites will be deploying myriad tactics to perpetuate the passivity of populations barely emerging from de facto house arrest, including a massive disciplinary – in a Foucault sense – drive by states and business/finance circles.

In his latest book, La Desaparicion de los Rituales, Byung-Chul Han shows how total communication, especially in a time of pandemic, now coincides with total vigilance: “Domination impersonates freedom. Big Data generates a domineering knowledge that allows the possibility of intervening in the human psyche, and manipulating it. Considering it this way, the data-ist imperative of transparency is not a continuation of the Enlightenment, but its ending.”

This revamping of Foucault’s Discipline and Punish coincides with reports about the demise of the neoliberal era being vastly overstated. Instead of a simplistic plunge into populist nationalism, what is on the horizon points mostly to a Neoliberalism Restoration – massively spun as a novelty, and incorporating some Keynesian elements: after all, in the post-Lockdown era, to “save” the markets and private initiative the state must not only intervene but also facilitate a possible ecological transition.

The bottom line: we may be facing a mere cosmetic approach, in which the deep structural crisis of zombie capitalism – barely moving under unpopular “reforms” and infinite debt – still is not addressed.

Meanwhile, what is going to happen to assorted fascisms? Eric Hobsbawm showed us in Age of Extremes how the key to the fascist right was always mass mobilization: “Fascists were the revolutionaries of the counter-revolution”.

We may be heading further than mere, crude neofascism. Call it Hybrid Neofascism. Their political stars bow to global market imperatives while switching political competition to the cultural arena.

That’s what true “illiberalism” is all about: the mix between neoliberalism – unrestricted capital mobility, Central Bank diktats – and political authoritarianism. Here’s where we find Trump, Modi and Bolsonaro.

From Anthropocene to Capitalocene

To counterpunch zombie neoliberalism, those believing another world is possible dream of a social-democratic revival; wealth redistribution; or at least neoliberalism with a human face.

That’s where eco-socialism jumps in: a radical rupture with the diktats of the Goddess of the Market, the product of a healthy rebellion against ultra-authoritarian neoliberalism and illiberalism.

In sum, that could be seen as a soft adaptation of Thomas Piketty’s analyses: to break the domination of capital by economic democracy, in the spirit of mid-19th century social democracy.

It’s quite interesting, in this aspect, to consider Fully Automated Luxury Communism, by Aaron Bastani, a refreshing utopian manifesto where we see that once society is stripped off everything superfluous linked to alienation, it’s still possible for everyone to find all the necessary technical means to live “in luxury” without recourse to infinity growth imposed by Capital.

And that brings us to the direct link between the Anthropocene and what has been conceptualized by French economist Benjamin Coriat as the Capitalocene.

Capitalocene means that our current state of appalling planetary degradation should not be linked to an undefined “humanity” but “to a very defined humanity organized by a predatory economic system.”

The state of the planet under the Anthropocene must be imperatively linked to the hegemonic economic system of the past two centuries: the way we developed our system of production and legitimized indiscriminate predatory practices.

The bottom line: to go beyond it, the economy must be reoriented and rebuilt, part of a “big bang in public and economic policies.”

In the Anthropocene, Promethean humanity must be contained so the rape of Mother Earth can be properly tackled.

Capitalocene for its part describes Capital as the crucial root and conditioner of the current world-system. The result of the struggle against the ravaging effects of Capital will determine the possible future of eco-socialism.

And that refocuses the importance of the commons – way beyond the opposition between private property and public property.

Coriat has shown how Covid-19 laid bare the necessity of the commons and the incapacity of neoliberalism to address it.

But how to build eco-socialism? Should it start as eco-socialism in one country (somewhere in Scandinavia)? How to coordinate it across Europe? How to fight ossified EU structures from the inside?

After all both Restored Neoliberalism and illiberalism already count on powerful states and networks. A good example is Hungary and Poland continuing to function as cogs of the German industrial supply chain.

How to prevent someone like Bill Gates to take control of a UN organization, the WHO, thus forcing it to invest in programs that fit his own personal agenda?

How to change the WTO’s free market rules, according to which buying palm oil and transgenic soya contributes to the de facto deforestation of large tracts of Africa, Asia and South America? This is a state of affairs that allows wealthy nations to actually buy the destruction of ecosystems.

Even if neoliberalism was dead, and it’s not, the world is still encumbered with its corpse – to paraphrase Nietzsche a propos of God.

And even as a triple catastrophe – sanitary, social and climatic – is now unequivocal, the ruling matrix – starring the Masters of the Universe managing the financial casino – won’t stop resisting any drive towards change.

Diversionist tactics supporting an “ecological transition” fool no one.

Financial capitalism is an expert in adapting to  – and profiting from – the serial crises it provokes or unleashes.

To update May 1968, what’s needed is L’Imagination au Pouvoir. Yet it’s idle to expect imagination from mere puppets such as Trump, Merkel, Macron or BoJo.

Realpolitik once again points to a post-Lockdown turbo-capitalist framework, where the illiberalism of the 1% – with fascistic elements – and naked turbo-financialization are boosted by reinforced exploitation of an exhausted and now largely unemployed workforce.

Post-Lockdown turbo-capitalism is once again reasserting itself after four decades of Thatcherization, or – to be polite – hardcore neoliberalism. Progressive forces still don’t have the ammunition to revert the logic of extremely high profits for the ruling classes – EU governance included – and for large global corporations as well.

Economist and philosopher Frederic Lordon, a researcher at the French CNRS, cuts to the inevitable chase: the only solution would be a revolutionary insurrection. And he knows exactly how the financial markets-corporate media combo would never allow it. Big Capital is capable of co-opting and sabotaging anything.

So this is our choice: it’s either Neoliberal Restoration or a revolutionary rupture. And nothing in between. It takes someone of Marx’s caliber to build a full-fledged, 21st century eco-socialist ideology, and capable of long-term, sustained mobilization. Aux armes, citoyens.

0 thoughts on “Our Grim Future: Restored Neoliberalism or Hybrid Neofascism?”