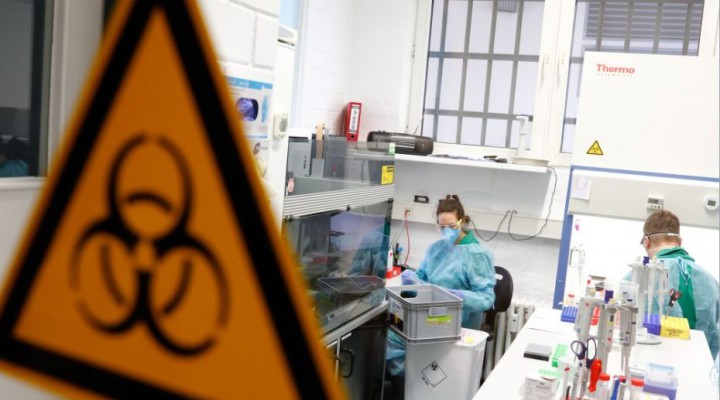 We may have been set up for an endless biopolitical quarantine without even noticing it, Pepe Escobar writes.

Italian master thinker Giorgio Agamben has been on the – controversial – forefront examining what new paradigm may be emerging out of our current pandemic distress.

He recently called attention to an extraordinary book published seven years ago that already laid it all out.

In Tempetes Microbiennes, Patrick Zylberman, a professor of History of Health in Paris, detailed the complex process through which health security, so far at the margins of political strategies, was sneaking into center stage in the early 2000s. The WHO had already set the precedent in 2005, warning about “50 million deaths” around the world caused by the incoming swine flu. In the worst-case scenario projected for a pandemic, Zylberman predicted that “sanitary terror” would be used as an instrument of governance.

That worst-case scenario has been revamped as we speak. The notion of a generalized obligatory confinement is not warranted by any medical justification, or leading epidemiological research, when it comes to fighting a pandemic. Still, that was enshrined as the hegemonic policy – with the inevitable corollary of countless masses plunged into unemployment. All that based on failed, delirious mathematical models of the Imperial College kind, imposed by powerful pressure groups ranging from the World Economic Forum (WEF) to the Munich Security Conference.

Enter Dr. Richard Hatchett, a former member of the National Security Council during the first Bush Jr. administration, who was already recommending obligatory confinement of the whole population way back in 2001. Hatchett now directs the Coalition for Epidemic Preparedness Innovations (CEPI), a very powerful entity coordinating global vaccine investment, and very cozy with Big Pharma. CEPI happens to be a brainchild of the WEF in conjunction with the Bill and Melinda Gates Foundation.

Crucially, Hatchett regards the fight against Covid-19 as a “war”. The terminology – adopted by everyone from President Trump to President Macron – gives away the game. It harks back to – what else – the global war on terror (GWOT), as solemnly announced in September 2001 by Donald “Known Unknowns” Rumsfeld himself.

Rumsfeld, crucially, had been the chairman of biotech giant Gilead. After 9/11, at the Pentagon, he got busy aiming to blur the distinction between civilians and the military when it came to GWOT. That’s when “generalized obligatory confinement” was conceptualized, with Hatchett among the key players.

As much as this was a militarized Big Pharma spin-off concept, it had nothing to do with public health. What mattered was the militarization of American society to be adopted in response to bioterror – at the time automatically attributed to a squalid, tech-deprived al-Qaeda.

The current version of this project – we are at “war” and every civilian must stay at home – takes the form of what Alexander Dugin has defined as a medical-military dictatorship.

Hatchett is very much part of the group, alongside ubiquitous Anthony Fauci, the director of the National Institute of Allergy and Infectious Diseases (NIAID), very close to WHO, WEF and the Bill and Melinda Gates Foundation, and Robert Redfield, director of the U.S. chapter of the Center for Disease Control and Prevention (CDC).

Further applications inbuilt in the project will include all-around digital surveillance, sold as health monitoring. Already implemented in the current narrative is the non-stop demonization of China, “guilty” of all things Covid-19-related. That is inherited from another tried and tested war game – the Red Dawn scheme.

Show me your fragility

Agamben did square the circle: it’s not that citizens across the West have the right to health safety; now they are juridically forced (italics mine) to be healthy. That, in a nutshell, is what biosecurity is all about.

So no wonder biosecurity is an ultra-efficient governance paradigm. Citizens had it administered down their throats with no political debate whatsoever. And the enforcement, writes Agamben, kills “any political activity and any social relation as the maximum example of civic participation.”

What we are already experiencing is social distancing as a political model (italics mine) – with a digital matrix replacing human interaction, which by definition from now on will be regarded as fundamentally suspicious and politically “contagious”.

Agamben has to be appalled by this “concept for the destiny of human society that in many aspects seems to have borrowed from religions in decline the apocalyptic idea of the end of the world”. Economics had already replaced politics – as in everything subjected to the diktats of financial capitalism. Now the economy is being absorbed by “the new biosecurity paradigm to which every other imperative must be sacrificed.”

How to fight against it? Conceptual weaponry is available, such as the courses on biopolitics taught by Michel Foucault at the College de France between 1972 and 1984. They may now be consulted via a decentralized platform set up by a collective which delightfully describes itself as “the crayfish”, who “advance laterally”: a concept that does justice to great rhizomatic master Gilles Deleuze.

Nassim Taleb’s concept of Antifragile is also quite helpful. As he explains, “Antifragile is the antidote to Black Swans.” Well, Covid-19 was a Black Swan of sorts: after all deciding elites knew something like it was inevitably coming – even as lowly Western politicians, especially, were caught totally unprepared.

Antifragile contends that because of fear (very much in evidence now) or a “thirst for order” (natural to any political power) “some human systems, by disrupting the invisible or not so visible logic of things, tend to be exposed to harm from Black Swans and almost never get any benefit. You get pseudo-order when you seek order; you only get a measure of order and control when you embrace randomness.”

The conclusion is that “in the black swan world, optimization isn’t possible. The best you can achieve is a reduction in fragility and greater robustness.”

There’s no evidence, so far, that a “reduction in fragility” in the current world-system will necessarily lead towards “greater robustness.” The system has never proved to be so fragile. What we do have is plenty of indications that the system collapse is being refitted, at breakneck speed, as digital neo-feudalism.

Lost in a biopolitical quarantine

Byung-Chul Han, the South Korean philosopher who teaches in Berlin, has attempted to lay it all out. The problem is he’s too much of a hostage of an idealized vision of Western liberalism.

Byung-Chul Han is correct when he notes that Asia fought Covid-19 with rigor and discipline inconceivable in the West – something that I have followed closely. But then he evokes the Chinese social credit system to mount an attack on China’s society of digital discipline. The system unquestionably allows for biopolitical surveillance. But it’s all about nuance.

The social credit system is like the formula “socialism with Chinese characteristics”; a hybrid that is effective only when responding to China’s complex specificities.

The maze of facial recognition surveillance cameras; the absence of restriction to data exchanged between internet providers and the central power; the QR code that tells whether you’re “red” or “green” in terms of infection; all these instruments were applied – successfully – in China to the benefit of public health.

Byung-Chul Han is forced to admit that does not take place only in China; South Korea – a Western-style democracy – is even considering that people in quarantine should wear a digital bracelet. If we talk about the different Asian models used to fight Covid-19, nuance is the norm.

The Asian-wide collectivist spirit and discipline – especially in Confucianist-influenced societies – works irrespective of the political system. At least Byung-Chul Han admits, “all these Asian particularities are systemic advantages to contain the epidemic.”

The point is not that Asian disciplinary society should be seen as a model for the West. We already live in a digital global Panopticum (where’s Foucault when we need him?) Social network vigilance – and censorship – deployed by the Silicon Valley behemoths has already been internalized. All our data as citizens is trafficked and instantly marketized for private profit. So yes; digital neo-feudalism was already in effect even before Covid-19.

Call it surveillance turbo-neoliberalism. Where there’s no inbuilt “freedom”, and it’s all accomplished by voluntary servitude.

Biopolitical surveillance is just a further layer, the last frontier, because now, as Foucault taught us, this paradigm controls our own bodies. “Liberalism” has been reduced to road kill a long time ago. The point is not that China may be the model for the West. The point is we may have been set up for an endless biopolitical quarantine without even noticing it.

0 thoughts on “How Biosecurity Is Enabling Digital Neo-Feudalism”