EU and China sign a Mandate of Trade Heaven 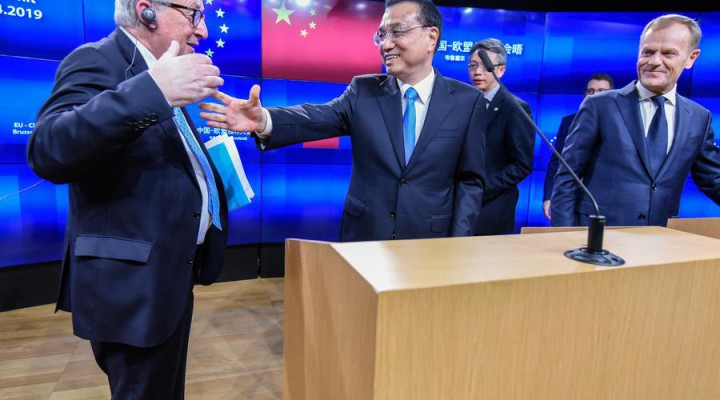 Beijing promises an investment deal by next year, to curb industrial subsidies and the need for tech transfers, while the EU promises its own transport network

Sparks did fly in Brussels, but in the end the European Union and China managed to come up with an important joint statement at their summit this week, signed by Chinese Premier Li Keqiang, European Commission President Jean-Claude Juncker and head of the European Council, Donald Tusk.

In theory, there’s agreement on three quite sensitive fronts: a complex, wide-ranging EU-China investment deal to be signed “by the end of next year, or earlier”, according to Li; Beijing to increasingly commit to erasing industrial subsidies and the obligation of technological transfers; and a substantial opening-up of the Chinese market to EU companies.

The EU is the largest combined market in the world and China’s top partner in trade, while China is the EU’s second largest trading partner. So, the EU-China summit on Tuesday was the real deal, unlike the endless Brexit soap opera.

Departing from concentric circles of posturing, the EU did not even blast China as a “systemic rival” – following the recent report EU-China: A Strategic Outlook. And there were no accusations of “unfair” trade hurled at Beijing.

Crucially, Brussels and Beijing seem to be finally engaging in building some sort of synergy between the New Silk Roads, or Belt and Road Initiative (BRI), and something only Eurocrats know actually exists – the EU Connecting Europe and Asia project, which in theory should advance in conjunction with the Trans-European Transport Network – a rail, road and air connectivity drive.

Diplomats in Brussels said off-the-record that the run-up towards this entente cordiale was as bumpy as a trail in the Tibetan plateau. EU negotiators did try to walk away from the table without even talking to their Chinese counterparts, over Beijing’s much promised, and always delayed “market reforms”.

It’s as if the EU – in practice, the leading Franco-German duo – was trying to pull a Trump, employing hardcore pressure to extract concessions. It worked.

Before the summit, while the war of the sherpas was raging, with revision piling upon revision, Zhang Ming, China’s ambassador to the EU and its leading negotiator, did his best to dismiss the notion of China as a “systemic rival”. “In Chinese culture, rivals are bound to seek superiority over the other side,” he was quoted as saying.

Brussels demanded from the start that all rewrites to their agreement should be tacitly approved by the leadership in Beijing – which took no time to understand the powerful geoeconomic ramifications of a positive outlook, in contrast with the trade war still unresolved with the US. And that led to the breakthrough that finally made the EU swoon, a real-life timetable for those elusive Chinese “reforms”.

The joint statement reads in fact like a rose garden: “The high level of ambition will be reflected in substantially improved market access [and] the elimination of discriminatory requirements and practices affecting foreign investors.” The devil, of course, is in the details.

From Beijing’s perspective, this spectacular trade and diplomatic victory smoothes the path towards the China and Central and Eastern Europe 16+1 summit in Dubrovnik on Friday. Of the European 16, no less than 11 are EU member states, while five are Western Balkans members.

Even as Li emphasizes at every turn Beijing’s firm interest in EU unity, one has to marvel at the Sun Tzu maneuver at the heart of the Chinese approach. No wonder some EU players incessantly carp at China’s divide-and-rule tactics.

Take for instance the Croatian angle. Croatia will sign a memorandum of understanding with Huawei, while the Croatian Railway Infrastructure and China Railway Eryuan Engineering Group will agree to set up a transportation corridor. Translation: smoother trade between Central Europe and ports in the Mediterranean, with China fast interlinking Greece, Italy and Croatia.

Slowly but surely, EU decisions are fast becoming integrated with the 16+1. Brussels Eurocrats actually examined the draft of deals that will be signed at the 16+1 summit in Dubrovnik. Unlike France, for instance, most of the 16+1 are enthusiastic participants in BRI – which, not by accident, is the star of the show, especially after Italy signed a memorandum of understanding to join New Silk Road projects last month.

Even as the EU lingers at designing what it still does not have – a comprehensive industrial policy – Beijing hits all the necessary buttons: free trade, multilateralism, globalization 2.0 – or even 3.0 or 4.0. Beijing essentially does not fear competing with EU firms.

After all, Beijing’s drive is to configure national champions in virtually every industrial and post-industrial sector, including preeminence in 5G and AI. The crux of the Chinese strategy is not the US but a close relationship with Europe, where opportunities to acquire first-class technology and first-class education are immense. Not to mention that Europe is BRI’s privileged terminal.

Perception is reality. There’s no doubt the Beijing leadership has understood that this EU-China agreement goes a long way to show, especially to its leaders, that they are dealing with a responsible emerging superpower. The contrast with the acrimony and intimidation tactics displayed throughout the US trade war could not be sharper.

At this stage, a flashback may be enlightening to put all that’s going on in perspective.

All the major religions of the book – Judaism, Christianity and Islam – share the same fable, according to which Noah, after the Deluge, divided the earth between his three sons. Shem got “Asia”, the lands considered the oldest, Ham got Africa, and Japheth got Europe.

It was only in the 18th century Europe that a noxious Christian equation went into full effect, articulating the curse of Ham, the color of a man’s skin, ethnic descent and slavery. That’s how the West justified racial slavery and the pillage of Africa – reduced to the status of a non-civilized space.

At the same time, under European (the land of Japheth) guidance, America was promoted as a land of colonization, and Asia (the land of Shem), as a land of economic exploitation. Judeo-Christian European elites had to admit the ancient brilliance of those Asian civilizations – Mesopotamia, India, China – but in the end they no more than integrated Asia in a new Orientalist narrative.

In parallel, based on the allegedly non-shameful character of Shem’s descendants, these elites forged a relatively common Semitic origin. And attributing Ham’s curse to a Muslim source, which for its part evoked Jewish sources, Christianity exonerated itself. The colonial, imperialist European project was on a roll.

All roads lead to Rome for Xi