Paul Craig Roberts – Fed Will Have Problem When Gold Hits $3,000 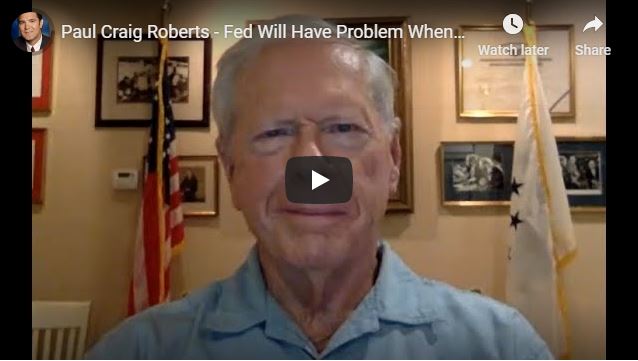 Former Assistant Treasury Secretary in the Reagan Administration and award winning journalist Dr. Paul Craig Roberts says the ideology fueling riots in America is “dangerous and anti-white.”  Dr. Roberts explains, “They are trying to give impunity to violence that is conducted in the name of opposing white racism.  If you want to take action against white racism, which includes all white people because, by definition, if you are white, you are a racist.  So, any violence against white racism is, therefore, tolerated because it would be illegitimate to try to stop that violence.  This is the reason the Democrats have not taken any action to prevent, quell or control the rioting, looting and burning.  Law and order is white privilege, and white privilege upholds white racism and, therefore, law and order is in the way of justice.  So, that’s the way they reason, and this kind of reasoning has been shaping up over a period of many years.  It’s part of cultural Marxism.  It’s part of identity politics, and now it’s come into its own. . . . What people don’t know because they are so brain washed is the real racism in America today is anti-white racism. It’s the whites who suffer racism.  They are the ones who are suffering the racism.”

On the economy and surging gold and silver prices, Dr. Roberts, who holds a PhD in economics, says, “After many years of quantitative easing, and all the money that came out, and now after all the money that came out over Covid and ran up many trillions of dollars of additional money creation and with the economy still very bad with a lot of unemployment and lost businesses and budget deficits we are running, it’s finally dawning on a few people that they may be printing too much paper for it to be worth much.  They can’t print gold and silver.  So, maybe we should own some gold and silver.  Of course, recently, the dollar index has been falling.  The dollar is losing a bit of value relative to other paper currencies that I guess have not printed as much.  I think what you are seeing here is awareness that so much paper money has been printed for so long.  It is being printed now, and it looks like it will be printed into the future that some people are overcoming the propaganda against gold and silver.  They are saying we should have some because at least we have something they cannot print.”

Dr. Roberts says it will someday come down to one extremely difficult choice for the Fed.  Dr. Roberts contends, “The way you can measure the pressure on the dollar is rising gold and silver prices.  So, if gold and silver continue to go up and you see the dollar under pressure, at some point, the Fed is going to have to make a decision.  Do they continue to support the stock and bond market to keep financial asset prices up or do they have to let that go and allow interest rates to rise to draw people back into the dollar?  That will be a new kind of crisis.  I can’t predict when it will happen, but at some point, if the dollar becomes in danger as the world reserve currency, that goes to the heart of United States power.  That tends to prevail over other considerations.”

0 thoughts on “Paul Craig Roberts – Fed Will Have Problem When Gold Hits $3,000”