HOME / WORLD / On the Turkish incursion into Northern Syria 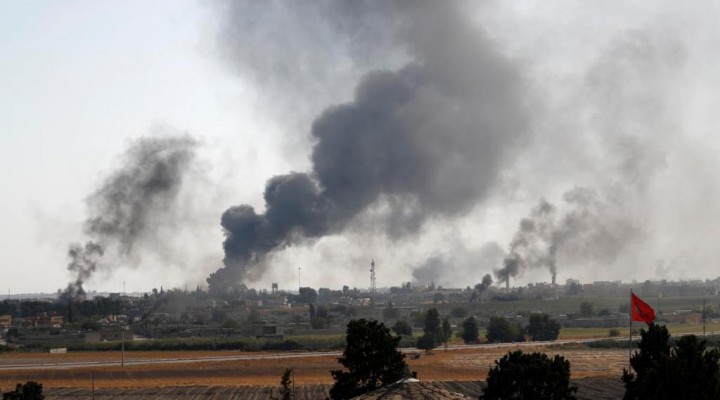 1. Before I start, read the thread below, where @ejmalrai  has outlined the situation very nicely. I will simply use it as the foundation of my explanation of Russia’s position.

Turkish attack against Syrian Kurds has been agreed with #USA & #Russia. It is a limited attack with limited objective. It will create a zone (not a buffer zone) for Syrian refugees to be eventually re-located from #Turkey and #Idlib when the time comes to eliminate Jihadists.

2. First thing’s first: there is a big difference between overt diplomatic statements and behind the curtain agreements. This doesn’t mean an official tells lies or deceives. It’s just that there are different tiers of international relations.

3. Second important preliminary statement: I am not “pro” this or that. And I certainly am not boxed in to any specific “ideology” or “school of thinking”. I call it as I see it, simply. But yes, I don’t adhere to the US/Western mentality of thinking with fists.

4. I’ve seen many comments saying that this current situation is very complicated to understand. It both is and it isn’t. It is possible to reduce the different elements of the scenario to the absolute basics, the accuracy of which history can attest to.

5. What’s happening right now in the Middle East (and especially in Syria) is the reconfiguration of the global order, the result of which will determine the status quo for the next 50-100 years. Don’t think that all parties involved are not aware of it. Maths talks (kinda).

6. Russia is no stranger to locking horns with the Turks, although in the past it was in the form of the Russian empire vs the Ottoman empire. This is why today’s rapprochement is for the most part pragmatic, but this relationship is far more sincere than anything the US has.

7. The US’ gateway to the Black Sea goes through Turkey. And of course, the local straits represent economic importance that cannot be overstated. Another important thing is the proximity of Turkey to the European continent. History testifies to this too.

8. As is known, Turkey, as a member of NATO, with the support of the EU, US, UK etc, acted as the driving axle of the partition of Syria. This led to the belligerents raising the stakes – shooting down a Sukhoi. The aim was to probe Russia’s reaction.

9. At the time of the shootdown the Minsk Agreements were already in effect. For more info about that, see my past threads. This, coupled with Putinonomics, meant that Russia could permit itself to respond asymmetrically – economically. I.e., not as the belligerents had wanted.

10. Understanding in advance where all this was heading (a change to Turkish foreign policy), the belligerents attempted a military coup in Ankara. Due to Iran’s intel help, the coup failed. This meant that Moscow’s S-400 power play had no real obstacles in front of it.

11. Russia needs the S-400 in Turkey to: further deflate NATO; ensure that straits and seas remain open to Russia and Eurasia as a whole; further deflate the EU; ensure that a key geopolitical pivot point remains stable (not chaotisised); create a regional triangle of allies.

12. Russia has not had to worry about Ukraine since Minsk II was signed in the beginning of 2015. Putin successfully managed to contain the US’ angle of attack and return it back to sender. But the war in Donbass needs to be sorted out still.

13. Trump and EU are obliged to really push Kiev to enforce the Minsk Agreements in order to save face. But there is a big problem: the Banderist element will not accept it whatsoever. Thus, the US has to find a way to contain the radicals whilst surrendering in front of Russia.

14. If Donbass is given “special status”, it will not explain why Russia is handing out passports to the DPR/LPR. Moscow’s preferred solution is for the whole of the Donetsk and Lugansk regions to join Russia lawfully. This can happened via a referendum, Crimea style.

15. Should all of this happen, the next stage of the problem begins – what to do with the rest of Ukraine, which risks having its own civil war. This will not be Russia’s problem. And I doubt Trump will want to invest much in solving it. The EU either.

16. There are talks ongoing now between all involved parties about what to do with Ukraine. It has become a bargaining chip. Trump is willing to give Russia Donetsk and Lugansk, but not for nothing. Maybe at the price of giving the US some room to manoeuvre in Turkey?

17. Idlib is not such a pressing issue for Moscow. It was successfully contained. Turkey uses it as a bargaining chip in order to get the best deal from both Eurasia and the US. Yes, the full liberation of Syria is mandatory. But not at just any cost.

18. Moscow’s main priority in Syria is dissolving the US & Co’s occupation of the Northeast. The only way Russia can tackle this problem is through Ankara. A deal is made: Ankara nibbles at the N/E, Russia keeps its support for the Kurds to a diplomatic minimal.

19. Trump, who wants to pull US troops out of Syria and to flush the neocon era down the toilet, also agrees to this, since his interests in the region do not require such a large occupation, especially if it causes tension with big players who the US can’t afford to push around.

20. Had the Kurds remained loyal to Damascus and the SAA, the Syrian war would already be over, and Turkey wouldn’t be citing the Adana agreement and bombing the YPG/PYD/SDF. Instead, the Kurds copied Ukraine and slit their own throat.

21. Of course, the Syrian government “condemns” Turkey’s incursion, and Moscow offers reminders about “territorial integrity”, but it’s all part of the “hybrid” game. The situation in Syria left the framework of international law long ago, so returning back inside will take time.

22. As I wrote not long ago, Russia gives “pieces” of S-400 to Ankara in exchange for “pieces” of Idlib. The problem is that no more “pieces” of Idlib can be given without chipping away at the Northeast. So Turkey now does this, paving the way for deeper cooperation with Moscow.

23. Israel was told by Moscow that the Syrian Army’s S-300 trigger finger has been very itchy as of late. After all, this is why S-300 came to Syria in the first place – so Moscow could regulate Israel’s activity in case Tel Aviv decided to violate the existing agreement.

24. Saudi Arabia, which funds the Kurds’ occupation of the Northeast, was sent a message via the Aramco incident. Iran’s allies has foreknowledge of the plans, and even supplied intel. Riyadh pretends that the IPO wasn’t affected, but this is a lie.

25. “Coincidentally”, the first flickers of a “regime change” op in Iraq became visible. However, Russia has seen enough of this technology to know how to combat it. And Putin certainly knows how to root out corruption and put the economy in order.

26. EU member states are desperate to cancel the anti-Russia sanctions. They are also implementing their own mechanisms for trade with Iran. Turkey has abandoned SWIFT. The role of the dollar is diminishing before the eyes. The role of the Yuan increases and increases.

27. The US’ has overextended in the Middle East, and now Trump is obliged to reel it in, consolidating what the US already has, but abandoning any projects that don’t immediately bring in dollars. Afghanistan and Iraq are two particular wallet-emptiers that drain the US’ budget.

28. And yes, I know that the US army fulfils the whims of Israel. But I am going to propose something (and surely be lambasted for it): Israel is going to experience leadership changes, and the region will benefit from it. Think of that what you will.

29. So yes, a lot of bargaining is going on. The war ended the moment Russian jets landed in 2015. Everything after that was just negotiations over severance packages for the losers. Once the sanctions against Russia are lifted, the recognition of a Russian Crimea will follow.

30. The Rojava Kurds and Ukraine can sob together, consoling each other as victims of the “civilised” American snake. But the US didn’t betray them. They betrayed themselves. The US only did what the US has always done – just business, nothing personal.

31. History will always remember how Putin’s Russia uprooted the US from Northeast Syria without firing a single bullet (a proverbial expression, but a Russian soldier factually hasn’t attacked a US soldier). Asymmetry is a neanderthal’s biggest weakness.

32. Btw – here is a simple method of deciphering complicated geopolitical situations: Who is @BHL supporting? After answering this, follow the money trail. До скорого!

Ollie Richardson is a geopolitical observer and founder of the http://Stalkerzone.org website dedicated to publishing information about the collective West's interference in the post-Soviet space. He also collaborates with a Ukrainian human rights organisation for the purpose of ensuring that the UN, EU Parliament, OSCE, etc are well-informed about the catastrophic situation in Ukraine with regard to political prisoners in the country, as well as freedom of speech, conscience, and association. In tandem with this work, he carries out his own primary research on the terrain in Paris vis-a-vis the "Yellow Vests" phenomenon.

0 thoughts on “On the Turkish incursion into Northern Syria”