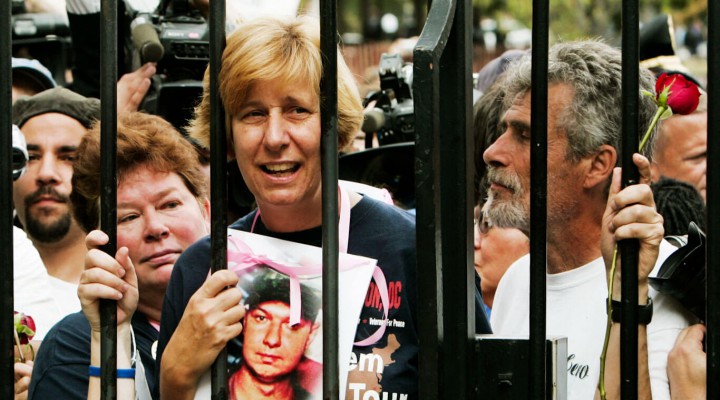 An interview with anti-war campaigner Cindy Sheehan on how liberals learned to love her, her clash with the Women’s March and more.

MPN– Some 2.7 billion dollars per day. That’s how much the U.S. government will spend next year to prop up the military and the more than 800 bases it maintains in over 70 countries. All in the name of national security. And despite that staggering figure, a majority of Americans feel that the wars in Iraq and Afghanistan were not even worth fighting, and they certainly have not made America safer.

That money is more than enough to pay for four years of college for every college student in this country, to fund food stamps and other social safety nets that help our most vulnerable, and to fund programs that would cut fossil-fuel emissions by 40 percent by 2035.

Despite this, there has been an utter failure by both the media and grassroots activists to address the growing waste and greed of the military-industrial complex.

An estimated 4 million people just took part in worldwide climate strikes that put the issue of climate breakdown at the forefront of the media conversation. Missing from this conversation, however, is an analysis of the role militarism and empire plays in driving the chaos. The U.S. military is the world’s largest polluter and emits more carbon dioxide than a hundred countries combined.

You see, America does not have a budget problem, it has a priorities problem; until we demand that our leaders prioritize our needs over those of corporations and those who profit off of war, our politicians will continue to pilfer taxpayer dollars by the trillions to fund forever wars that support building the largest empire history has seen.

Today, Donald Trump is the ugly face of the American Empire, and recently declared the country to be “locked and loaded” and ready to confront the Islamic Republic of Iran. And with conflicts in Iraq, Afghanistan and Syria (to mention only a few) ongoing, it feels like the cycle of war may never end.

The anti-war movement in the U.S., so strong under George W. Bush’s presidency, was effectively disarmed by his successor. Barack Obama put a friendly face on U.S. imperialism and, with the help of Hillary Clinton as his secretary of state, even managed to convince many so-called liberals and progressives to support devastating regime-change operations in Libya, Syria and Ukraine on humanitarian grounds. These interventions unleashed al-Qaeda and ISIS onto the Middle East and neo-Nazi rule on Russia’s borders. Obama expanded America’s wars, dropping over 25,000 bombs targeting seven different countries: Afghanistan, Iraq, Syria, Libya, Yemen, Somalia and Pakistan. He expanded drone wars, earning the nickname “Drone King,” and expanded U.S. bases across Africa under the guise of fighting the War on Terror.

While the Democratic Party and establishment-left mourned Obama’s exit from the White House, warning of a new era of fascism under President Trump, hundreds of thousands of outraged Americans took to the streets in protests against the new Republican president’s racism, misogyny, and xenophobia. This outrage gave birth to the Women’s March. But as these protests swelled, one couldn’t help wondering why there wasn’t any mobilization remotely on this scale in the previous eight years during Obama’s presidency?

This question crossed the mind of Cindy Sheehan, a longtime anti-war activist nicknamed “Peace Mom,” who contacted the organizers of the Women’s March — since one of the movement’s stated goals was to end violence against women — and asked them to make peace a central focus of the march.

But the response of a key organizer of the march showed just how little war and peace was a priority to establishment liberals: “I appreciate that war is your issue Cindy, but the Women’s March will never address the war issue as long as women aren’t free.”

Sheehan rejected the notion that women could be “free” without addressing war and empire. She countered the dismissive comment of the march organizer by stating that divorcing peace activism from women’s issues “ignored the voices of the [millions] of women of the world who are being bombed and oppressed by U.S. military occupation.”

It was clear that the anti-war movement needed to be reborn again, and who better than Sheehan herself could fit the bill?

Cindy grew up in California, where her father worked for the Lockheed corporation. A turning point in her life came in April 2004 after her son Casey was killed while on active service with the U.S. military in Iraq. She gained national attention after she staged an extended protest outside George W. Bush’s ranch in Crawford, Texas, demanding to meet him.

Since then she has tirelessly campaigned against war and violence abroad, being described as the “Rosa Parks of the peace movement.” Throughout her activism, she has taken a nonpartisan stance in speaking truth to power, calling out George W. Bush as the biggest terrorist in the world, but also traveling to Norway to protest Barack Obama’s Nobel Peace Prize. In 2012 she was the vice-presidential nominee of the Peace and Freedom Party.

Today, Cindy is the chief organizer of the upcoming Rage Against the War Machine protests in Washington, scheduled to take place on October 11.

0 thoughts on “Rage Against the War Machine: An Interview with Peace Activist Cindy Sheehan”