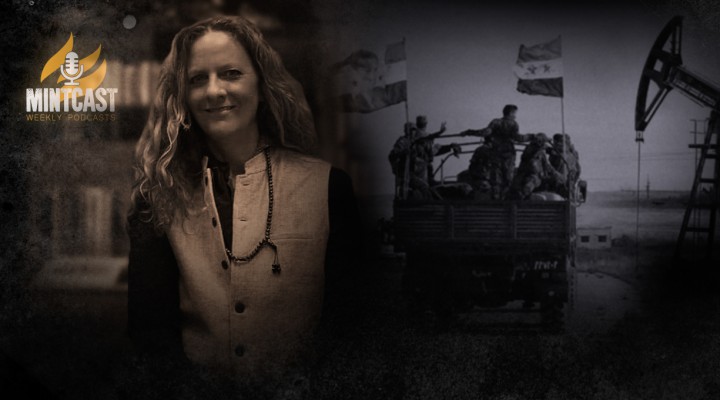 Vanessa Beeley weighs in on the crisis in Idlib, Syria, the geopolitical agendas at play and how civilians are scrambling for survival amid a fight for Syria’s major oil, gas and water reserves.

MPN– Welcome to MintCast, the official weekly MintPress News podcast hosted by Mnar Muhawesh and Whitney Webb. MintCast is an interview podcast featuring dissenting voices, independent researchers and journalists who the establishment would rather silence.

In this episode, we are joined by journalist Vanessa Beeley, who is covering the conflict in Syria from Damascus for MintPress News. Beeley is well-known in independent media for her expertise on the Syrian conflict and particularly the covert involvement of Western powers in the crisis through humanitarian front groups. More recently, she has been covering the conflict in Syria’s Idlib province, where groups directly linked to al Qaeda are fighting to maintain control of the province with the direct backing of Turkey while the Syrian military seeks to reclaim its territory.

Recent developments in the conflict have seen Russia and Turkey negotiate a ceasefire of sorts after Syria and Turkey nearly went to war over Turkey’s backing of militants in Idlib as the Syrian military, backed by Russia, pushed forward. Despite the ceasefire, Turkey continues to lobby NATO, the EU, and the U.S. to support their efforts to halt the Syrian advance into Idlib, with limited success.

Turkish President Recep Erdogan is so desperate for EU support for his military incursion in northern Syria that the Turkish state is effectively weaponizing refugees as leverage to induce European states to adopt Turkey’s position in Syria. This has resulted in millions of Syrian and Afghan refugees flooding Europe after Turkey opened its border with the EU.

It was in 2011 that Turkey initially opened its borders to Idlib, where the current crisis was born. This set the stage for the rise of al Qaeda and ISIS in Syria. The terror groups viciously took control of this northern region which became ground zero in the fight for the geopolitical interests of Turkey, Western-backed armed groups linked to al Qaeda, and the Syrian military, which was trying to retake control of Syria’s most resource-rich region. That fight for oil, gas and major water reservoirs has left civilians scrambling for survival.

The crisis has led to the creation of a parallel state with the support of Turkey, Gulf Arab states like Saudi Arabia and Qatar, and Western nations including France, Britain and the United States, who poured millions of dollars and countless weapons into the hands of these terror groups in a desperate bid to overthrow the Syrian government.

In what was being described for years in Western media as a bastion of democracy and revolution to justify support for these so-called “moderates,”Idlib became the largest safe haven for al Qaeda.

Vanessa Beeley joins MintCast to help us unpack the crisis in Idlib, the geopolitical agendas at play and how civilians are scrambling for survival amid a fight over Syria’s resources.

0 thoughts on “Podcast: Vanessa Beeley Unpacks the Idlib Crisis and the Fight for Syria’s Oil, Gas and Water”