HOME / Multimedia / Podcast: The Beirut Explosion, Economic Terror and the Drumbeat of War Against Hezbollah 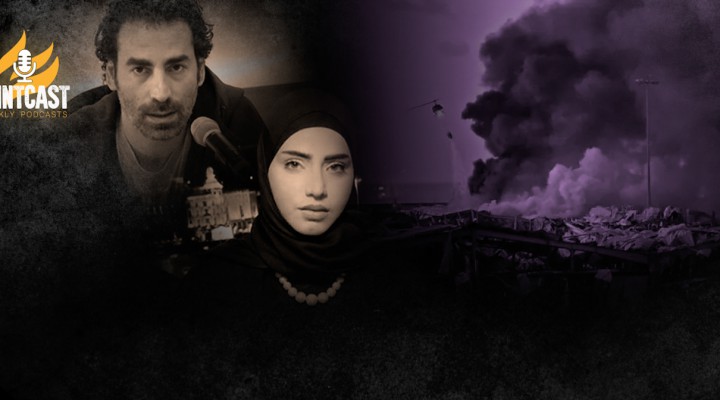 Lebanese journalists Laith Marouf and Marwa Osman recount their experience living through the recent blast that destroyed much of Beirut, an explosion that not only occurred during a period of rapid economic decline but of increasing public outrage over corruption and Western sanctions that have squeezed Lebanon dry.

elcome to MintCast — an interview series featuring dissenting voices the establishment would rather silence– I’m your host Mnar Muhawesh Adley.

Lebanon is reeling from a blast that destroyed much of the capital Beirut on Tuesday, August 4. 2,700 tons of ammonium nitrate in the city’s port is thought to have caught fire and exploded, killing at least 157 people and injuring thousands more. The blast, believed to be one of the largest non-nuclear explosions in history, destroyed much of the city and has left an estimated 300,000 people homeless.

Exploiting this tragedy are the usual suspects within Western media and government including the United States and Israel who are beating the drums of war as they try to blame Lebanon’s resistance movement Hezbollah for the massive explosion.

Joining us today to discuss this and what this means for the region and world are two independent journalists and analysts who lived through the blast, Laith Marouf, and Marwa Osman.

Laith Marouf is a journalist, geopolitical analyst, and activist who has served as Canadian National Chair of the group, Solidarity for Palestinian Human Rights. He was the Executive Director of Concordia University Television in Montreal and currently lives in Beirut where he saw first hand the devastation caused by the August 4 explosion.

Marwa Osman is a lecturer at the Lebanese International University and Maaref University. She’s also the host of the MidEaStream broadcasted on Al-Etejah English Channel. Her writing focuses primarily on Middle Eastern issues and can be found in a wide range of outlets, including Press TV.  Like Marouf, Osman is a resident of Beirut.

The explosion could barely have come at a worse time for Lebanon, which is suffering through an economic meltdown, with a collapsing currency, rampant inflation, employment difficult to come by, and food becoming increasingly scarce. Worse still, the country’s Economy Minister Raoul Nehme confirmed that grain silos at the port, containing around 15,000 tons of wheat, were destroyed. As a result, the country has barely a few weeks of food in reserve.

Hospitals, already feeling the strain due to the worsening coronavirus outbreak, have been overwhelmed, and have been forced to turn away many arriving for urgently needed medical care. With the city destroyed, roads closed and vehicles upended, most of Beirut’s residents have had little option other than to stay where they are, begin to clean up, even as clouds of toxic fumes engulf the area.

The blast occurred in a context of rapid economic decline, increasing public outrage over corruption — including from Washington — and Western economic sanctions that have squeezed the country dry.

0 thoughts on “Podcast: The Beirut Explosion, Economic Terror and the Drumbeat of War Against Hezbollah”