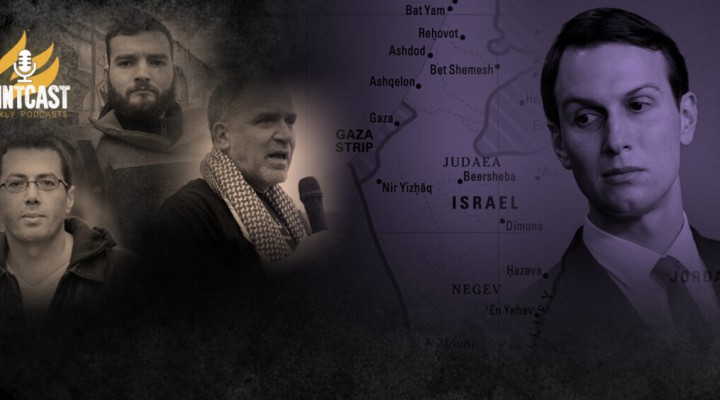 In this episode, we are joined by Dr. Ramzy Baroud, Robert Inkalesh and Miko Peled to discuss the so-called “Deal of the Century,” a plan promoted by U.S. President Donald Trump together with his son-in-law Jared Kushner and Israeli Prime Minister Benjamin Netanyahu, as Israel’s annexation plans for the Jordan Valley located in the Palestinian West Bank, and the implications of the so-called deal for Palestine and the broader region.

Dr. Ramzy Baroud is a Palestinian-American journalist, media consultant, author, columnist, and editor of Palestine Chronicle. He is a former Managing Editor of Middle East Eye and former Deputy Managing Editor of Al Jazeera online. He has authored five books and a contributor to many others, the latest of which is “These Chains Will Be Broken: Palestinian Stories of Struggles and Defiance in Israeli Prisons.”

Miko Peled is an Israeli-American human rights activist. He is the author of “The General’s Son. Journey of an Israeli in Palestine,” and “Injustice, the Story of the Holy Land Foundation Five.”

Robert Inkalesh is a journalist, writer and political analyst who has lived in and reported from the occupied Palestinian West Bank. His latest documentary film, “Steal Of The Century’ Trump’s Palestine-Israel Catastrophe,” premiered in June and can be viewed for free on YouTube.

The Netanyahu-led Israeli government was expected to initiate its plan to annex as much as 35 percent of the West Bank in the Jordan Valley earlier this week, formally declaring it part of Israel along guidelines laid out in President Trump and his son in law Jared Kushner’s so-called “Deal of the Century.” After international criticism and even caution from some members of the U.S. Congress, a delay in the plan has been announced. Nonetheless, critics fear that Israel will begin annexing Palestinian land soon.

Israel’s annexation of the region would put the over 70,000 Palestinians under full Israeli authority, giving the Israeli military control over all movement, agriculture, water, and all imports and exports, forcing residents to endure apartheid-like conditions experienced by those living in Gaza.

The plan would also cut out a part of the West Bank, allowing Israel to encircle the region militarily and control all Palestinian access to the outside world similar to the apartheid-like policies it carries out in Gaza. Not only does Trump’s so-called Deal of the Century hand de facto control to the Israeli military over all Palestinian movement, but it also opens up the doors to over 100,000 illegal Jewish only colonies on indigenous Palestinian land and prevents the two million Palestinian refugees who have the legal grounds to return to their land from ever doing so.

The move is nothing short of territorial conquest and military occupation as defined by the United Nations Charter and the annexation is illegal under International Law. Indeed, the United Nations’ High Commissioner on Human Rights, Michelle Bachelet, has declared Israel’s annexation plans both  “illegal” and “disastrous.” This will, without a doubt, create another preventable man-made humanitarian disaster at the hands of Western powers that will fuel the military-industrial complex and stimulate profits off of the theft of indigenous land and blood of indigenous people. If the plan is not stopped, the West Bank could very well become a sprawling open-air prison and ghetto similar to Gaza.

Despite the international opposition, Israel enjoys full support from the United States, the world’s only superpower, and plans to complete the annexation before Trump’s reelection run in November.