HOME / Multimedia / Podcast: How the Democratic Party Unleashed Decades of Racial Injustice and Police Brutality on Communities of Color 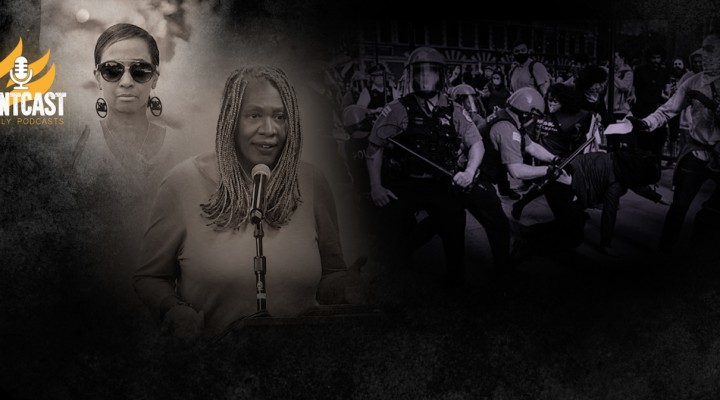 Margaret Kimberly and Monique Cullars Doty join MintCast to discuss how Democrats attempt to save face by co-opting justice movements, including Black Lives Matter, and the party’s roots in White supremacy.

In this episode, we are joined by Margaret Kimberly and Monique Cullars Doty.

Kimberly is a New York-based writer and activist for peace and justice. You can find her work at the Black Agenda Report where she is a senior columnist. Her book, “Prejudential: Black America and the Presidents,” was published in February.

Cullars Doty is a local organizer for the Black Lives Matter Twin Cities Metro and greater Minnesota region and the Twin Cities Coalition for Jamar Clark.

While some are calling it a “revolution” and others an “American intifada,” one thing is clear, that millions of people have taken to the streets to demand justice for George Floyd and an end to police brutality. This after a viral video showed Minneapolis police officer Derek Chauvin kneeling on Floyd’s neck, slowly suffocating the life out him while he begged for his mother. Floyd struggled for air for over eight minutes. His dying words “I can’t breathe” were heard around the globe, igniting a mass uprising and calls to defund the police, place law enforcement under community control, and even to dismantle law enforcement institutions altogether.

The state, under the Trump administration, has met their calls with brutality, beating and shooting protesters and journalists with rubber bullets, tear gas, and so-called less than lethal weapons. The National Guard has been deployed in over 30 states as the government struggles to keep a lid on the public’s anger.

Philando Castile, Eric Garner, Walter Scott, Breonna Taylor. The list of victims of racist police violence goes on and on. Police, on average, kill over 1,000 Americans every year, vastly more than the rest of the developed world combined, yet officers are largely protected from any consequences.

Margaret Kimberly and Monique Cullars Doty join MintCast to unpack the decades of racial injustice and police brutality unleashed on communities of color by the Democratic Party, how Democrats attempt to save face by co-opting justice movements, and the party’s roots in White supremacy.

Addressed in this discussion is also billionaire money going into the non-profit industrial complex under the guise of social justice philanthropy and how this is affecting Black Lives Matter on the national front. The guests also go over community policing solutions and local solutions to support disenfranchised communities.

0 thoughts on “Podcast: How the Democratic Party Unleashed Decades of Racial Injustice and Police Brutality on Communities of Color”