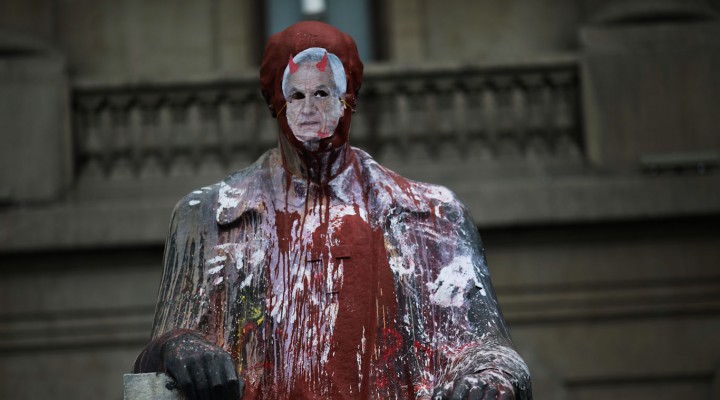 As millions gather in Santiago and whole families march against privatization and rising inequality, the corporate media is busy defending Chile’s billionaire president.

MPN- Chile’s right-wing President Sebastian Piñera recently declared war. He wasn’t referring to a foreign government, but to his own people. He even ordered tanks and the military to the streets.

An estimated 20 protesters have been killed and over 500 injured.

Since October 14th, millions of Chileans have taken to the streets, rocking what is normally one of Latin America’s most stable countries.

Chileans are in an uproar over rising taxes on public transportation, growing income inequality, and a broken pension system.

Many are demanding Piñera’s resignation, even after he has tried to appease the protesters.

Chile has become ground zero for the neoliberal economic model where the powerful billionaire class gets tax breaks while the working class pays government debts.

On average, a Chilean worker earns around $9,000 per year.

Piñera is taking lessons from Chile’s former US-backed dictator Augusto Pinochet to hold onto his authority.

The state is behaving like a security force for the country’s privatized industries.  Unarmed protesters are being met with brute military force. Soldiers and police are shooting at protests at point-blank range.

In addition to those killed or injured, over 5,000 have been detained.

Several detainees have formally reported being tortured by security forces.

American corporate media have described the protests as “riots” and “violent”.

And have referred to protesters as a “headache” for President Piñera, blaming the deaths and chaos on the people instead of security forces.

Security forces trained by the US and Israeli militaries for decades. Some rioting and looting has taken place, but most of the protests are nonviolent.

With millions gathering in Santiago and whole families marching together for a better future, why is the media only showing one side of the story?