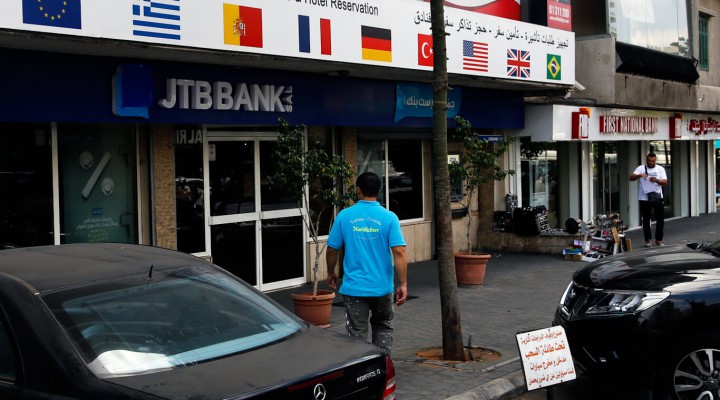 The fact that the U.S. sanctions countries whenever its president pleases could in itself be considered a hostile act. Even in wartime, these sorts of collective punishments are illegal under the Geneva Conventions.

Economic sanctions are not only a very important topic in present international relations but have also come to pepper daily news headlines. Sanctions have become an increasingly prevalent measure for disciplining a state’s “unacceptable behavior” by banning trade with said state and disrupting its financial relations for political purposes.

Despite this, there exists no universally accepted mechanism in international law to determine whether an economic sanction is lawful or not. Thus the issue remains one of the least developed areas of the international law framework.

The U.S. Treasury claimed it was targeting Jammal Trust Bank and its subsidiaries for enabling Hezbollah’s financial activities for the Hezb’s Executive Council and the Martyrs Foundation, which pays remittances to the families of Hezbollah fighters killed in action, whom the Treasury labeled as “suicide bombers..

Jammal Trust Bank is the second Lebanese bank to be listed as a terrorist organization by the United States and, as will be explained below, effectively turned into a liquidated bank — the first was the Lebanese Canadian Bank.  The charges against Jammal Bank are not related to money laundering, however; rather it is the practice of regular banking operations, such as opening accounts and paying salaries to institutions listed by U.S. regulators as “terrorist organizations.” News of the new sanctions on Jamal Trust was leaked to Banque du Liban BDL (Lebanon’s Central Bank) before the U.S. Treasury report was even released. Parliament Speaker Nabih Berri is reported to have been informed about the matter by BDL Governor Riad Salameh hours before the Treasury’s report was released at 10 p.m. Beirut time. The report said that the Treasury’s action highlights how “Hezbollah continues to prioritize its interests, and those of its chief sponsor, Iran, over the welfare of Lebanese citizens and Lebanon’s economy.”

The “political” statement of the Treasury raises several questions. The move comes in the context of local and regional events that are inseparable from the course of financial and military pressure exerted by the United States and Israel on Lebanon.

This time, U.S. pressure carries a clear message in targeting a bank owned by a Shia businessman who is primarily affiliated with Parliament Speaker Nabih Berri. It is one of only four Lebanese banks owned by Shia businessmen. Such a move would cause widespread confusion in the banking sector and hearkens back to what happened with the Lebanese Canadian Bank in 2011 on the day the U.S. Treasury Department decided to put it on OFAC’s list and subsequently forced it to shut down.

When a bank is placed on this list, it is no longer able to carry out any transactions related to the U.S. dollar, such as transferring funds from Lebanon abroad and vice versa and opening credits to merchants, or other banking activities. These types of sanctions make it nearly impossible for any bank to deal with foreign banks and forces it to operate locally using only Lebanese pounds. In other words, the bank effectively becomes liquidated.

This targeting of a “Shia bank” is not unprecedented. It was preceded by clear threats to other Shia-owned banks, such as the Phoenicia Bank, whose name was added a few weeks ago to a list related to the lawsuit filed by the families of American dead and wounded in Iraq. Dozens of Shia businessmen are said to have been added to the list of defendants alongside the Phoenicia Bank. In 2015, the owner of the Middle East and North Africa Bank, Qassem Hojeij, was also added to OFAC’s list, prompting him to withdraw from the bank and relinquish his responsibilities in it.

The application of unilateral economic sanctions is an explicit violation of international law under the United Nations’ (UN) and the Organization of American States’ (OAS) charters, human-rights stipulations, and even the United States’ own law. Despite that truth, they have become President Donald Trump’s favorite tool to assert his foreign policy goals around the world.

The Office of Foreign Assets Control (OFAC) has been implementing a Lebanon sanctions program since August 1, 2007, when then-President George W. Bush issued an executive orderto “Block Property of Persons Undermining the Sovereignty of Lebanon or Its Democratic Processes and Institutions.” Apart from the question of who designated the U.S. as the police of Lebanon, the U.S. itself failed to notify the Lebanese public when and how Hezbollah had ever undermined their sovereignty, while Israel continues to violate Lebanese sovereignty on a daily basis but has never been hit by any sanctions.

The names of individuals and entities designated pursuant to Bush’s executive order, whose property and interests in property are therefore blocked, are published in the Federal Register and incorporated into OFAC’s Specially Designated Nationals and Blocked Persons List (SDN List).

Unless otherwise authorized or exempt, transactions by U.S. persons or in or involving the United States are prohibited if they involve transferring, paying, exporting, withdrawing, or otherwise dealing in property or interests in property of an entity or individual listed on the SDN List. The property and interests in property of an entity that is 50 percent or more owned — whether individually or in the aggregate, directly or indirectly — by a person on the SDN List are also blocked, regardless of whether the entity itself is listed.

However, what happens if a person or an entity “violates” these U.S. imposed sanctions? Well, civil monetary penalties of up to the greater of $250,000 or twice the amount of the underlying transaction may be imposed administratively against any person who violates, attempts to violate, conspires to violate or causes a violation of the imposed sanctions. Upon conviction, criminal fines of up to $1,000,000, imprisonment for up to 20 years, or both, may be imposed on any person who willfully commits or attempts to commit, or willfully conspires to commit, or aids or abets in the commission of a violation of these sanctions.

In 2015 the U.S. Congress approved a law to allegedly tighten its grip on Hezobollah’s financing. In fact, U.S. President Barack Obama signed the Hezbollah International Financing Prevention Act of 2015, on Dec. 18, 2015, imposing sanctions on foreign financial institutions that deal with Hezbollah and its affiliated Al-Manar TV channel. OFAC issued a list comprising around 100 names that the U.S. considers related to Hezbollah with addresses in Lebanon.

Lebanese commercial banks have now found themselves in hot water for simply providing financial and banking services to their clientele because of sanctions that, to say the least, are illegal per international law.

According to Chapter VII of the UN Charter, sanctions are to be imposed by the U.N. Security Council, following a determination that there is a threat to, or a breach of, international peace and security. This means that a sole UN member state is not entitled to impose economic sanctions upon another member or any sovereign state. The application of said unilateral sanctions itself violates the UN’s Declaration on the Principles of International Law, concerned with friendly relations and cooperation among states.

The resolution, in accordance with its charter, was adopted by the General Assembly in October 1970, and references “the duty of States to refrain in their international relations from military, political, economic or any other form of coercion aimed against the political independence or territorial integrity of any State.”

The fact that the U.S. sanctions countries whenever its president pleases could in itself be considered a hostile act. Even in wartime, these sorts of collective punishments are illegal under the Geneva Conventions. Illegal U.S. sanctions mostly affect the poorest sectors of society, lead to violations of human rights, and are aimed at coercing foreign entities.

What happened with Jamal Trust Bank leaves many question marks in the Lebanese banking sector about the fate of depositors and borrowers. And more questions about how the BDL will deal with this issue? What will be the stance of the Lebanese political blocs? How will the Lebanese Association of Banks, which abides by all U.S.-imposed regulations and actions, deal with this new dilemma? Will Lebanese officials be able to alleviate the U.S.’s unending harassment of Lebanon’s banking sector at every regional or international geopolitical crossroad? And finally, until when will the international community watch in silence as the U.S. continues to violate international law to coerce sovereign nations to abide by the empire’s own foreign policy?