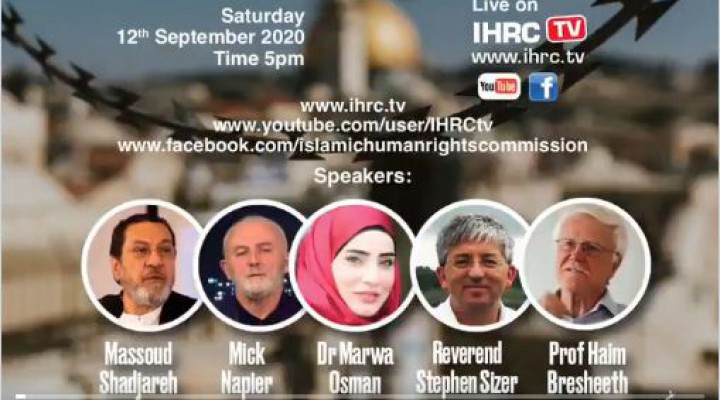 WEBINAR TO SLAM NORMALISATION WITH ISRAEL

In light of the recent normalisation of ties between the UAE and Israel. Join us with our fantastic panel of experts to dissect the subject of normalisation through different modus operandi. Among the speakers are:

Dr Marwa is a political commentator on issues within West Asia and university lecturer at the Lebanese International University and Maaref University. She has featured on several international and regional media outlets including RT, Press TV, Al Manar and Al Alam.

Author of the book “Christian Zionism”, Reverend Stephen Sizer will elaborate on how Israel has successfully made inroads into Christian communities in order to normalise the brutality of the occupation.

Mick is currently the chair of the Scottish Palestine Solidarity Campaign. A lifelong campaigner and supporter of Palestine, Mick has faced regular attacks by the Zionist lobby

Professor Haim is a teacher at the School of Oriental and African Studies (SOAS) in London. An ex-Israeli Jew and ardent anti-Zionist, his most recent book is titled “An army like no other: How the Israeli defence force made a nation”.