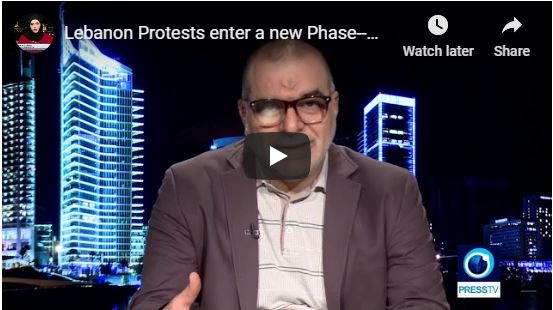 Protests against government corruption and deteriorating living conditions have swept across Lebanon over the last nine days.

As of October 25, Sayyed Nasrallah claimed these demonstrations were infiltrated by foreign powers, asserting that the data and information that Hezbollah have obtained confirm that Lebanon has entered a stage of regional political targeting, and it is no longer just a popular movement. On Oct. 29, Lebanese PM Saad Hariri resigned his position putting the entire country in a new dilemma.

We discuss this segment with Mohammad Obeid political commentator.

Meanwhile, fresh wave of Iraqi anti-government protests descend into violence. Iraqi security forces have detained a number of gunmen in Baghdad and Najaf as fresh protests break out in the capital and the country’s southern cities against economic woes.

We discuss this segment with Motaz Al-Wehwah lecturer of Islamic studies and political analyst.