HOME / WORLD / Why Europe should save Lebanon from the abyss 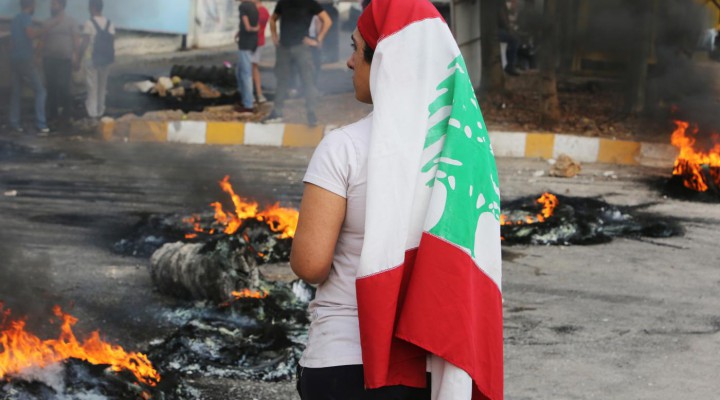 While political polarisation in the Middle East remains high, tensions and accidents have increased the risks of a miscalculation and escalation towards an open conflict.

Today, the region dangerously resembles Europe on the eve of the First World War.

Should such a conflict break out, many countries could be dragged into it. Due to its polarised internal situation, its proximity to the Syrian battlefield, and the tense situation between Hezbollah and Israel, Lebanon could be one of the scenes for that next war.

However, even before being a collateral casualty of a looming regional confrontation, Lebanon risks an internal implosion due to its exasperated population, which can no longer tolerate the dire economic situation and the country’s political paralysis, as widespread protests on Thursday have shown.

The government’s latest – clumsy, desperate, and failed – attempt to tax WhatsApp calls is an example of how inadequate and detached from reality it is.

Despite its tiny dimension, Lebanon has always been a political barometer for the region; the Arab Spring’s general rehearsal took place in Beirut in 2005 with the so-called Cedar Revolution following the assassination of former prime minister Rafic Hariri.

Despite its tiny dimension, Lebanon has always been a political barometer for the region

Hopes that arose at the time for political change are now dashed due to many reasons, most important of which is the abysmal economic mismanagement.

Today, there are growing fears about an economic and monetary collapse as Lebanon faces a Greek-style national bankruptcy.

Additionally, a renewed conflict between Hezbollah and Israel could cause Lebanon’s many contradictions to explode. Consequently, a large number of Syrian refuges could be tempted to head for Europe.

Lebanon remains the country hosting the largest number of refugees per capita. More than 950,000 Syrian refugees are registered with the UNHCR, while the government estimate of the total Syrian displaced population stands at 1.5 million.

Some are already trying to move to Turkey. It is an eventuality that the EU and the major European chancelleries, mindful of 2014/15 refugee emergency, should not underestimate; they should instead quickly prepare contingency plans to prevent it.

The only one way to do this is to ensure that an effective government exists in Lebanon, saving the country from the economic disaster that is exasperating its population.

Therefore, the political dynamics that have crippled it over the past 15 years are not sustainable anymore. Furthermore, it cannot go on being the terrain where the United States, Iran, Saudi Arabia, and their respective proxies settle their scores.

The country’s ruling elite should give priority to people’s needs as opposed to their own narrow partisan privileges.

The US Treasury is complicating the picture by increasing the pressure on Beirut’s banking system to squeeze Hezbollah.

The funny paradox is that two decades of official tough US policy against Hezbollah have not weakened the movement. The election of President Michel Aoun, an ally of Hezbollah, in 2016 has played to the party’s advantage.

On the other end, it would be naive, to say the least, to think that Lebanon’s problems are all attributable to Hezbollah as the usual scholars in Washington, Jerusalem and Riyadh, are always inclined to believe.

While it is hard to ignore the large pro-Hezbollah electorate (it has 12 seats in parliament, but with allies makes up 70 out of the 128 seats), with popular unrest growing, Hezbollah should also realise that the country cannot continue to be ruled in the same manner. The current spontaneous protests also risk overwhelming the movement.

Lebanese people, as well as the more involved global and regional players, should then consider political alternatives to end the current deadlock. It cannot continue to cling on to the same political actors who have failed systematically.

Europe, for the reasons mentioned above, ie the daunting perspective of a new wave of refugees, should play an important role, especially countries like France and Italy which maintain relevant interests in Lebanon.

French President Emmanuel Macron, the most active European leader in trying to ease tensions in the region, cannot think about launching a successful US-Iran dialogue without neutralising some of the many traps that could derail it. Lebanon is one of the main ones.

Lebanon needs a roadmap managed by those who are not corrupt or have not been involved in wrongdoing during the past 15 years.

Lebanon needs truly independent, moderate politicians who can unite rather than divide, and who have always promoted dialogue among the Lebanese people.

Ultimately, Lebanon needs a leader who, for the first time in its recent history, does not see politics as a tool to amass wealth but as a vocation to improve people’s lives, because Lebanon’s eventual collapse will go beyond its immediate neighbours.

The fires and protests that have been ravaging the country in recent days are a sinister omen of what the perspective of Lebanon as a failed state could imply for the region and beyond.

0 thoughts on “Why Europe should save Lebanon from the abyss”