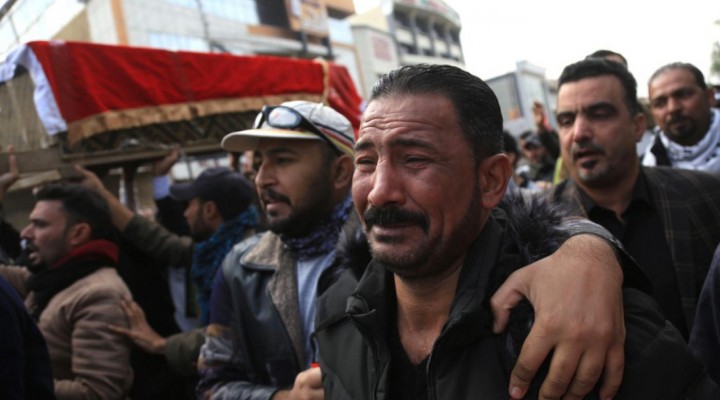 Column by Thomas Friedman fails to tackle the complex realities behind ongoing protests in Baghdad, Beirut and Tehran

A recent New York Times column by Thomas Friedman offers another useful opportunity to better assess the ongoing protests in the Middle East.

Friedman correctly explains why hundreds of thousands of people have taken to the streets in Baghdad, Beirut and Tehran: They wish to “be treated as citizens with rights, and not just members of a sect or tribe with passions to be manipulated” and to be ruled by “noncorrupt institutions”.

Unfortunately, he also seems to draw misconceptions about these events, significantly simplifying – and maybe even involuntarily manipulating – what is happening, especially by portraying the protests as a regional uprising against Iran.

The role of Saudi Arabia

He is right in seeing an anti-sectarian drift in the protests, but it is naive to attribute sectarianism solely to Tehran’s will. Not a word is spent on the predominant role that Saudi Arabia and its Wahhabi strand of Islam has played over the last four decades in promoting a sectarian agenda in the region and elsewhere, nor is there a modicum of empathy for the persecution of Shia in Saudi Arabia and Bahrain.

Iran is portrayed as being “ready to arrest and kill as many democracy demonstrators as needed to retain its grip on Iraq, Syria and Lebanon” and as “the biggest enemy of pluralistic democracy in the region today”.

What Friedman neglects is that in Iran, Iraq and Lebanon, a highly imperfect form of pluralistic democracy with a multiparty system is struggling to affirm itself. Of course, it is subject to huge constraints, which also explains the ongoing protests; although the democratic models in these three countries cannot be equated to Scandinavian ones, their differences with some pro-US Arab autocracies remain striking.

Hopefully Friedman is not implying that Saudi Arabia, Bahrain and Egypt are better pluralistic democracies than Iran, Iraq and Lebanon? Or that if protests were to break out in the streets of Riyadh, Manama and Cairo, they would not be suppressed with the same determination so far deployed in Iran and Iraq?

According to Friedman’s narrative, “Iran has used its Shiite Hezbollah militia in Lebanon and Syria and its Popular Mobilization Forces militia in Iraq to try to snuff out all their bottom-up secular democratic movements”.

The political dynamic between Iran and Hezbollah is much more nuanced; by no means is it a relationship of mere subordination of the second to the first. There is a much more complex reality than often escapes observers not fully aware of the real, and sometimes impenetrable, Shia dynamics.

Hezbollah leader Hassan Nasrallah is one of the few external political figures who holds significant influence within the Iranian political galaxy. Far from being a proxy who executes Tehran’s “instructions”, he contributes to elaborating them; it is a two-way relationship. This should not be a hard concept to grasp in Washington; looking at the longstanding US-Israel relationship may help.

Friedman claims that since the US invasion of Iraq in 2003, “Iran has never wanted to see a stable, multisectarian, secular democracy emerge in Baghdad”. While this could be true, what is again missed is that Iran’s main priority in Iraq has been the prevention of a new attack of the type it endured during the long and bloody 1980s war.

From Iran’s viewpoint, its regional “destabilisation” strategy is a mix of pre-emptive and preventive moves; a form of forward defence similar to the one Israel has used towards its neighbours for decades. Again, this should not be difficult to understand, although understanding does not imply legitimising.

The bottom line is: If Israel is granted the right to self-defence under Article 51 of the UN Charter – a right that is sometimes exercised in questionable ways – other countries may also decide to claim the same right and exercise it in an equally questionable manner.

Friedman correctly urges the US to support pluralism in the region through “creative diplomacy”. Sadly, we have to go back 40 years, to former President Jimmy Carter brokering the Peace Treaty between Egypt and Israel, to see creative US diplomacy at work in the region. Since then, Europe and the Middle East have hoped and prayed to see it in action again – but regrettably, with the notable exception of the short-lived Iran nuclear deal, they have gotten only a blind, binary approach that goes between bullying sanctions and the use of force, with a corollary of never-ending wars.

‘Revolt and be slaughtered’

Friedman concludes: “But the bad guys at the top won’t go easily, quietly or bloodlessly. And since no outside power will be riding to the rescue, it will take sustained, organized, bottom-up mass movements – in Lebanon, Iraq and Iran in particular – to enable the future to bury the past and topple all those at the top who want to use the past to bury the future.”

Putting wisely aside the debate on who represents the past and the future when Middle Eastern policy is involved, those at the top who must go are in Baghdad, Beirut and Tehran; those in other regional capitals, who live as much in the past, can relax, for the time being.

To the extent that the past is a good guide for the future, Friedman’s conclusion echoes quite well the unfortunate experience of the first Bush presidency in the spring of 1991, when the Kurds and Shia of Iraq were urged to rebel against Saddam Hussein, just dislodged from Kuwait, only to be later abandoned to his brutal and vengeful repression.

Today’s message to the Lebanese, Iraqis and Iranians seems as heartening as it was three decades ago: Revolt and be slaughtered under our watch.