HOME / WORLD / How will Iraq respond to US air strikes? 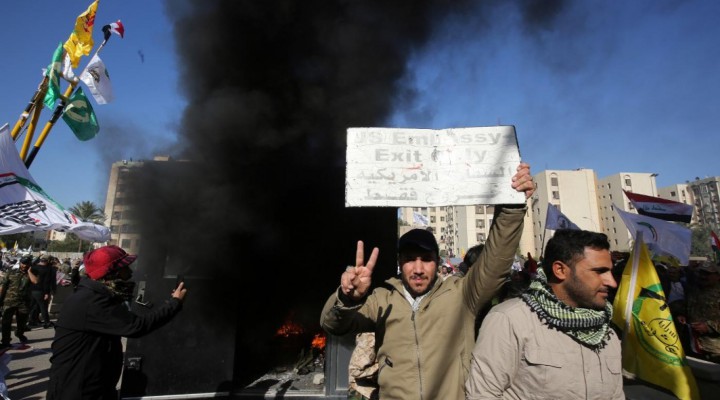 Attacks could shift the focus of ongoing protests from political corruption and Iranian influence, towards the US violation of Iraqi sovereignty

Thousands of Iraqi protesters stormed the US embassy compound in Baghdad on Tuesday in response to US air strikes  that killed more than two dozen Iran-backed militia fighters on the weekend.

Demonstrators chanted “Death to America”, burned US flags and held posters calling for the embassy to be shut down. There were also calls by Iran-backed militia forces for a sit-in outside the US embassy.

The latest escalation highlights growing tensions between the US and Iran over Washington’s maximum-pressure policy during the past year and a half, and Tehran’s departure from a policy of strategic patience to one of maximum resistance. It also comes as Iraq has been rocked by protests against its political class, leading to the resignation of Prime Minister Adel Abdel Mahdi and extended bickering over who will succeed him.

The situation is now bordering on a constitutional crisis, amid tensions between President Barham Salih and parliament over who should select and appoint a new prime minister.

Iraq’s popular protests have been hastily explained by Western mainstream media as a popular uprising against Iran’s excessive influence in the country. But while there is dissatisfaction with Iran’s role, the protests have far broader motivations, including the public’s frustration with local elites.

Amid this backdrop, on 29 December, the US air force carried out a raid on five facilities of Kataib Hezbollah, hitting targets in Iraq and Syria and killing more than two dozen fighters. A Pentagon spokesman justified the strikes as retaliation for an attack on 27 December at an Iraqi security base in Kirkuk that killed a US contractor.

As we await for more details on Sunday’s strikes, the first consideration is the apparent disproportionality between the attack attributed to pro-Iranian militias in Kirkuk and the US response. Such a disproportionate response appears at odds with the attitude previously held by President Donald Trump.

When the Iranians shot down a US drone over the Gulf in June, the US president reportedly called off retaliation at the last minute because it would have resulted in a disproportionate number of Iranian casualties. On Sunday, such caution seems to have been shelved. Was the high number of casualties deliberate, a mistake, or did the Pentagon present Trump with a fait accompli?

Beyond speculation over the ongoing war of nerves between the US president (who left to his officials the task of briefing the news media on the military strikes) and his administration, the raid could represent – in the best tradition of the law of unintended consequences, where Washington has excelled in recent years – an unexpected assist to Tehran.

In recent weeks, Iran has been on the defensive amid ongoing protests in Beirut and Baghdad, which have been problematically portrayed as a weakening of Tehran and the Axis of Resistance. But the strikes could shift the focus of the protests in Iraq from the political system’s corruption and Iran’s influence in the country, towards the violation of the country’s sovereignty by the US.

The Pentagon’s news release on the raid might have thrown further salt on the wound of Iraq’s violated sovereignty, noting that “Iran and their [Kataib Hezbollah] proxy forces must cease their attacks on U.S. and coalition forces, and respect Iraq’s sovereignty, to prevent additional defensive actions by U.S. forces”.

Kataib Hezbollah is a pro-Iran militia that comprises part of the Popular Mobilisation Forces, which have been incorporated into the Iraqi security forces and placed under the authority of the prime minister. As such, according to a strict legal interpretation, Iraq’s sovereignty might have been violated more by the US than by Iran and its proxies.

In the coming days, three potential reactions should be watched: that of the Iraqi parliament, where a motion calling for US troops’ withdrawal stalled months ago; that of Iraqi protesters in the country’s streets and squares; and above all, that of religious leader Ali al-Sistani, as it will be crucial whether, and how, the US strikes will be discussed during next Friday’s prayers.

As one veteran observer of Middle East politics, Elijah Magnier, recently pointed out to me, Iran does not need to do much to promote its positions and defend its interests in the area. It needs only to wait and capitalise on the irrepressible US propensity to commit serial mistakes.

0 thoughts on “How will Iraq respond to US air strikes?”