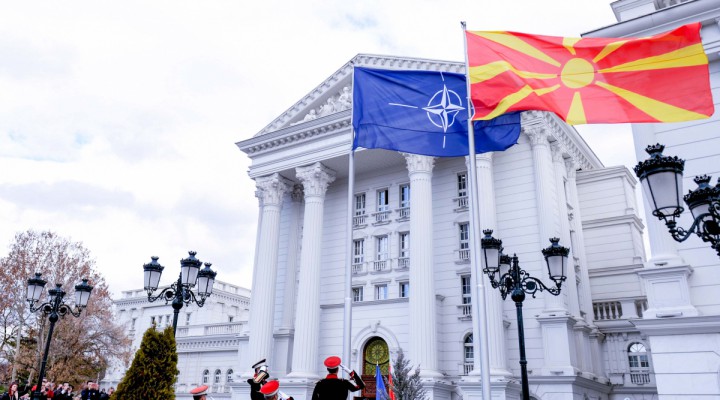 Although most media outlets, including purely political resources, are currently writing about the coronavirus pandemic, geopolitical processes continue to run their course. It’s just that the amount of information about COVID-19 is somewhat overshadowing a number of events, and some, like the spread of the virus itself, have far-reaching consequences. One of these took place last week.

On 20 March, the president of Macedonia, Stevo Pendarovski, signed a document that officially approves the country’s accession to NATO. Despite statements by some experts in previous years that Turkey was blocking Macedonia’s membership, every NATO member ratified the admission of the small Balkan state to their military and political club. The final country on the list was Spain, which gave its approval just a few days before, on 17 March.

Previously, Greece was considered to be the most serious obstacle, having demanded that the country change its name. The country’s new prime minster, Zoran Zaev, who came to power by way of a colour revolution and the support of George Soros, willingly agreed to every condition set out by Macedonia’s neighbour. After Macedonia became North Macedonia in 2018, an accession protocol was signed with NATO in February 2019 that guaranteed a change in the country’s military and political status.

This sequence of events also suggests that the attack on the ruling VMRO-DPMNE party, with intense pressure from EU diplomats, was aimed not at “democratic reforms”, which are rhetorical window dressing for such machinations, but at the elimination of the country’s neutral status and the establishment of a puppet government.

However, Radio Free Europe, the mouthpiece of the US State Department, is openly claiming that Macedonia is being drawn into NATO with US and European help in order to reduce Russian and Chinese influence in the Balkan states. Yet this source of propaganda fails to mention that neither Russia nor China has military bases in the Balkans, and it also does not clarify what their influence consists of.

But now North Macedonia must faithfully pay its contributions to the general budget and, in return, perhaps Brussels will be stricter with instances of Albanian separatism. And perhaps it won’t, because Albania joined NATO a lot earlier – in 2009. In the Balkan states, Serbia is waiting next in line along with the Federation of Bosnia and Herzegovina, the people and political elite of which are being actively cultivated by EU and NATO emissaries.

But NATO’s efforts don’t stop at the Balkan states. Finland – the northernmost flank of NATO’s future expansion – is extremely important due to the length of the Finland–Russia border and the country’s as yet neutral status. Despite this, NATO is actually already present there because the country is home to the European Centre of Excellence for Countering Hybrid Threats, which opened in October 2017. The Aleksanteri Institute, based at Helsinki university, and the Russian research group at the National Defence University are also playing their part in the country’s pro-NATO indoctrination.

Judging by official information provided on NATO’s own website, the alliance is also fairly pleased with its extensive cooperation with neutral Sweden – from participating in various operations to numerous joint programmes. The country’s cooperation with NATO has been greatly stepped up in recent years, however.

Both countries are also involved in the NATO Response Force initiative in complementary roles. So, with such obedient partners, Brussels is in no hurry to actively integrate these states into its structure. From time to time, Western media outlets whip up hysteria about the Russian threat in the region, sounding out public opinion about whether campaigns should be stepped up and what adjustments should be made to local anti-Russian propaganda. Articles by an army of biased experts reinforce the strategy, noting the benefits gained by Sweden and Finland from their cooperation with NATO.

But all of this is taking place in an area of traditional geopolitical interests for the US and NATO, in the world formed after World War Two. The situation in other regions is far more interesting.

Following an increase in tensions between the US and Iran in late 2019, there was a discussion about a Middle Eastern version of NATO. However, the idea of an alliance is discussed as regularly as the status of Sweden and Finland in Northern Europe.

In 2018, such an initiative was put forward by the Trump administration called the Middle East Strategic Alliance (MESA), which was supposed to include Saudi Arabia, the United Arab Emirates, Kuwait, Qatar, Oman, Bahrain, Egypt, and Jordan. In fact, the idea of such an alliance was originally conceived back in 2011, when the region was rocked by the Arab Spring. The choice of countries is somewhat doubtful, however, given current friction between Qatar and Saudi Arabia. And if Qatar’s active cooperation with Iran is taken into account, then the alliance just isn’t possible in such a configuration.

Yet it has already been estimated that the annual expenditure of such a military alliance, excluding the US, would be $100 billion, and it would command over 300,000 troops, 5,000 tanks and 1,000 combat aircraft. The principles of engagement between the alliance’s members will differ from the NATO Charter, however.

There are forces in the US with an interest in drawing India into the orbit of their strategic influence, too. To begin with, discussions are underway regarding the possibility of granting India the same status that NATO countries have in military and political dealings with the US. Although officially, New Delhi and Washington are already working together as part of the Indo–Pacific Partnership.

It is likely that the crisis that has erupted as a result of the pandemic will adjust these ambitious plans by US war hawks, especially when one considers that NATO has been fairly ineffectual in tackling the pandemic. It has not yet reached its peak in Europe, but EU and NATO countries are already being torn apart by scandals and conflicts. It is interesting that the only assistance NATO has given Italy to tackle the spread of the coronavirus is the delivery of a mobile patient staging system designed to hold 40 patients. That’s it.

The alliance’s inability to respond promptly to challenges and come to the aid of its countries’ citizens supports the idea that NATO is not an organisation for the collective security of Europe, but a relic of a bygone era that is being taken advantage of and exploited by a third power with absolutely no connection to the European continent.