HOME / Politics / From Hegemony To Hedgemony 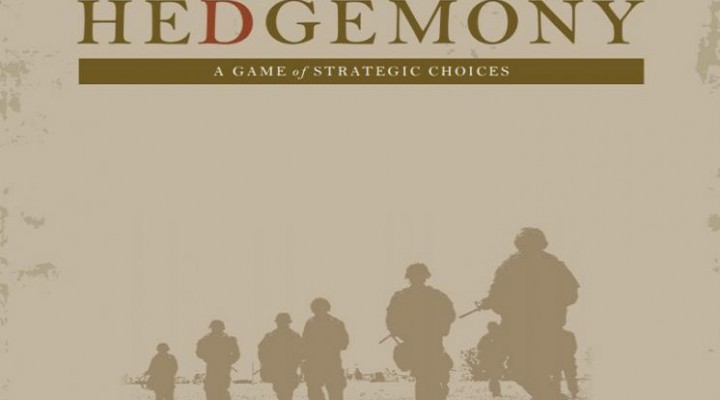 The RAND corporation has unveiled a unique defence planning and response project called “Hedgemony”. As is clear from the name, it is a play on the words “hegemony” and “hedging”, i.e. managing and insuring against risk.

“Hedgemony. A Game of Strategic Choices” is a practical tool that RAND researchers have created to teach US specialists in defence and related areas. Its mission is to provide a better understanding of how different strategies could influence key planning factors in the sphere of trade at the intersection of force development, force management, force posture, and force employment.

The researchers behind it are leading specialists in the areas of defence, network-centric warfare, information technologies, and international relations. Some of them have served in the US military and taken part in missions abroad.

The game features players representing the United States and its key strategic partners and competitors. A global situation, competing national incentives, constraints and objectives are all outlined. There is also a specific set of armed forces with defined capacities and capabilities and a pool of periodically renewable resources. The players are asked to outline their strategies, then make difficult choices in managing the allocation of resources and forces in line with their strategies to achieve their objectives within resource and time constraints.

All the countries involved are identified openly. As well as the armed forces of the US, EU and NATO (blue), there is also Russia, China, North Korea and Iran (red) – all countries that have featured in the Pentagon and White House’s doctrine documents as a threat in recent years.

As is known from the press release, the game was initially devised to help the Pentagon develop one of its capstone documents – the 2018 National Defense Strategy. Since mid-September 2020, it has been the first wargame that the RAND Corporation has offered for sale to the general public at a price of $250. Unlike other games that usually focus on a specific conflict, Hedgemony gives players a bird’s eye view of how trade-offs between force structure, position, modernisation and readiness can influence the United States’ ability to achieve its strategic objectives.

Commenting on the game’s release, one of its designers and a senior defence research analyst at the RAND Corporation, Michael Linick, said that “[t]he world is driven by a tremendous amount of uncertainty, and the best way to deal with that is a hedging strategy”. In his opinion, the game helps to provide a more holistic understanding of the big strategic issues in a rigorous and replicable way.

The timespan of the proposed military campaign – five years – is rather telling.

Besides current policymakers, the game’s target audience includes military colleges, universities and other institutions that teach defence policy and strategy, as well as wargame enthusiasts.

Significantly, the RAND Corporation states that one of its aims in creating and distributing the game is the training of a future generation of military strategists and decisionmakers. It is a specific tool that simultaneously sets a pattern of behaviour and creates a clear framework for the perception of friends, enemies, and neutral forces. But while psychology refers to a framework like this as “prejudice”, here it is being presented as teaching America’s national strategy.

The decks of cards for the red players have more combinations than those for the blue players because the default scenario was designed to provide a wide variety of premeditated actions that the red players could take to “test” the strategic priorities of the blue players. At the same time, the scenario is designed in such a way as to give the blues free play, limited only by the forces and resources available, as well as the typical scope of authority of the US Defense Secretary.

A game session requires sets of action and investment cards and a deck of event cards that are given to the players, a game board, and information about the initial conditions of the scenario and victory, as well as the resources and capabilities of each player.

The game requires a room with a rectangular table that can accommodate the game board (27 inches by 36 inches), seats for around ten to twelve people, a projection screen and laptop for the facilitator, two laptop computers (one for the adjudicator that is connected to the projection screen and one for the notetaker), notepads and writing materials.

The list of options includes quite a few different variations, such as missile tests, arms proliferation, combat actions, gray zone actions, cyber and other non-military warfare, proxies, and exercises. The game board is a map of the world showing the areas of responsibility of the Pentagon’s six commands – Central, European, Northern, Southern, African, and Indo-Pacific. The default global scenario is set in 2017, i.e. when the text of the new defence strategy was being prepared.

The rules say that the players should have a strategy in mind before the game begins. For the US player, this will be a defensive strategy. For all the other players, the strategies will be their national doctrines (so it is assumed that players will have a thorough knowledge of the strategic documents of all players – the EU, NATO, Russia, China, Iran, and North Korea). At the start of the game, the facilitator tells the players to write down their strategic objectives for the game.

It is then assumed that the players will coordinate their actions during the game to achieve these objectives. Post-game discussions should usually focus on the strategies and objectives of the players, assessments of whether they were able to fulfil these objectives, and the major events, factors and considerations they encountered and which impacted on their ability to achieve their goals.

Unlike other typical war games, winning and losing are not so important in Hedgemony. There is only one metric for victory and that is influence. Thus, the conditions of victory are measured and tracked from the point of view of influence (Influence Points), and players compete for influence during the game.

Therefore, influence needs to be thought of as the representation of a country’s position, its abilities and/or capacities to shape events and outcomes in a given region or world using military force and other means.

The resources that players have at their disposal can be spent on:

– deploying or using armed forces to achieve a goal;

– increasing the national capacity or ability to modernise armed forces;

– maintaining or adjusting force readiness (only for the player representing the US); and

– direct actions that could increase a player’s influence.

Interestingly, the game rules provide an example of Russia’s actions, but, rather than involving a conventional military strategy, it is gray zone pressure on a non-NATO state, including cyber attacks during an election, joint military exercises with partners, and investment in their own armed forces. There is also an incursion into a non-NATO state and the strengthening of its proxies in countries such as Ukraine, Moldova, Belarus, Georgia, Syria, Afghanistan, Libya, and the Baltic States. But the options also include cooperating with the US on an arms control treaty. There are also events within a country, such as a fall in the Russian economy and a coup by Turkish intelligence, which is angry with the US foreign policy on Kurds and shares classified NATO technology with Russia (which gives extra points in the game).

In addition, there are events unrelated to the main players, such as actions by the terrorist organisation Boko Haram, the ongoing war in Yemen, a confrontation between Israel and Iran, a migrant crisis in Greece, oil supply problems, piracy in the South China sea, revolutionary movements in Latin America, and a conflict between Pakistan and India.

According to the bibliography, the game is based on the basic models of games and exercises, including computer simulations, used in the strategic planning and training centres of the US armed forces.

The game is of considerable interest, since the developers’ creative approach has been adapted to the actual geopolitical situation as much as possible. But in addition to the incentive of military training, the game’s release also shows a certain adjustment in the mindset of America’s strategic thinking. Although traditional tools such as deterrence, intimidation and military operations still exist, they are not as prominent as they once were. Washington is no longer pursuing the preventive defence strategy known as “combating global terrorism” of the George W Bush and Obama eras. Also, in what is a rather complex situation with various local tensions and conflicts, specific and powerful opponents have been identified.

Amid an emergent multipolarity, the US has to balance and use the limited resources it has effectively, including its partners and satellites.

There is a very important nuance, however, that is not dealt with directly in the game scenario (or stated in US doctrines and strategies), but which is obvious.

If, in order to gain a strategic advantage and victory, one needs to carefully consider the possible risks and consequences, allocating resources correctly and choosing objectives, then, in practice, this also means creating unacceptable risks for one’s opponent, including blocking their resources. And this strategy can be used not only during a conflict in the theatre of war. Sanctions can be an effective tool if they can put pressure on international organisations and companies associated with insuring international transport or other obligatory functions. The problems completing the construction of the Nord Stream 2 pipeline were also related to hedging, or, to be more precise, the insurance of ships working in the Baltic Sea. Here, we are talking specifically about the work of international insurance companies, which represent a significant segment in the global economy. In addition, national currency quotes depend on country ratings given by rating agencies in the West. A similar situation can be seen on various international stock exchanges, where the share quotes of companies related to the country’s GDP are subject to manipulation. Interdependence in the global economy has rather a lot of these critical hubs and centres of influence that are controlled by the West.

Ultimately, Hedgemony is a sign that geopolitics and geoeconomics are merging. More precisely, it is about the possible synergistic effect of the two disciplines, and now, in America’s view, geoeconomics has a greater bias in the military toolbox.

0 thoughts on “From Hegemony To Hedgemony”