HOME / WORLD / The Fall of the Dancing Bear 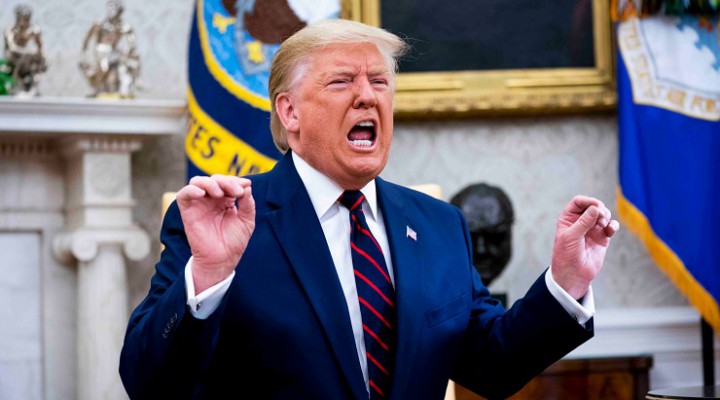 Trump is a “dancing bear,” controlled by Attorney General William Barr, part of a CIA cabal put together, in partnership with former FBI Director Robert Mueller, during the 1970s.

Barr and Mueller are and have been for decades, close personal friends despite attempts to represent them as otherwise. Not only are they friends but they are “cohorts in crime,” as the expression goes, always working together, plotting their plots, scheming their schemes.

The years of American decline under Trump, rapid and catastrophic, seems to be one of those schemes, with Trump playing little or no real role at all, not really despite efforts to make things appear otherwise.

His wars are never fought, his projects never completed, his policies seldom enacted except, of course, where his personal brutality and those of the Deep State coincide.

This hypothesis was supported by a recent discussion with a White House advisor who went “off script” on Trump’s recent blunders, hydroxychloroquine (now banned in the US by the FDA for COVID treatment), backing drinking or injecting bleach (a toxic industrial form) as a “quack remedy” and his threats of using the military illegally against US citizens.

Trump is now being isolated from “harmful elements” that made up his informal advisory group which included certain pseudo-Christian cult leaders and White Nationalists.

As things stand, $8 trillion was stolen from the economy during the fake COVID 19 bail out where 80% of the cash went to Deep State elites, making Trump’s stock market “pump and dump” far more profitable and efficient than the 2007-8 sub-prime crash under Bush 43.

The results were the same, first doubling, now tripling America’s fake national debt to the Deep State-owned Federal Reserve “system” and using the mechanisms put in place after 9/11 to push the nation into social disorder.

One might then ask whether both Bush 43 and Trump were, in actuality, “tasked” by the Deep State in ending American hegemony?

This is yet another hypothesis, one that sees the United States as a “milk cow” to be used until it is no longer profitable and then sent off to be slaughtered.

COVID 19 with an expected 325,000 deaths and $12 trillion in economic losses may well be that slaughter. There again, we look at the seemingly purposefully failed COVID 19 response and the dangerous reopening in the midst of Trump regime supported hoaxes claiming, in some extreme cases, that all COVID 19 dead are “crisis actors.”

Many, up to 35% of Americans, believe this or similar falsehoods, a 35% that votes for Trump and that will not be interfered with when it votes, as many millions of Americans now are.

According to the New York Times, the State of Georgia actually set up a polling place for the recent failed primary election inside a nursing home filled with dying COVID 19 patients as part of a GOP led voter suppression campaign.

Trump has touted that mail in ballots, how he and his family have always voted, is a form of communist takeover.

The issue at this juncture, with the US in freefall and the entire globe aghast at the stumbling-bumbling pronouncements of a disgraced and discredited leader believed by most to be mentally incapacitated, acting as that dancing bear frontpiece for a criminal cabal using America’s remaining power to terrorize the world.

This narrative was told to me in 2016 by former CIA asset, Gene “Chip” Tatum, now retired in Ecuador. Gene, who writes for Veterans Today, is a longtime friend. Gene and I went over this book, “The Mule,” offered on Amazon, on what the book included and what was redacted by the CIA, which was much.

This book, as with others, isn’t to be taken as gospel, not without confirmations and on issues of this import, many confirmations. Those confirmations now exist, to an extent, and the hypothesis that Trump, as with other presidents in the past, to varying degrees, serves a Deep State cabal or faces assassination or being isolated from power as with Barak Obama is confirmed.

Obama spent 8 years in office, two massive electoral victories, but had both houses of congress and the Supreme Court held by the opposing political party.

Though Israeli expansionism was reigned in, a key issue and a peace deal with Iran was enacted, Obama still followed basic Deep State narratives of Russophobia and global militarism.

As the summer of 2020 approaches in the US, so much seems the same, perhaps it is, but the ability to hide the truth from the masses is no longer there. What is clear is this, Trump leads nothing, he is simply a dancing bear, brought out by those running the carnival, his handlers with a pocket full of treats with a gun and whip handy if needed.

The bear can still bite, with Trump, to follow the analogy, that means he could fire Attorney General Barr but can he? Here is what we assert:

It is dangerous to believe any narrative that is hand fed, particularly one that fails every test, one that continually discredits itself when tested. The narrative, that two political parties control America, that elections jockey back and forth between each and that leaders, such as they are, share different visions but also share a love of America, a love of peace, a love of mankind and are constrained by their humanity and decency, is not just false but laughable.

Behind this superficial and failed assessment is the idea that “special interests” influence policy but the “best and brightest” of Americans choose to serve in government.

Nothing could be further from the truth.

When one looks at the Trump administration, one that shares much with its earlier incarnation under George W. Bush, one sees an individual, Trump as with Bush, of non-existent academic capabilities, a spoken narrative filled with absolutism, with deception and noted by its rambling incoherence.

What one sees is cheap street theatre for politics, fake leaders, fake government departments, fake courts, fake law enforcement, not just at national level but all the way to the murderous militarized police that flail at protesters or, as has been cited as well, use protests to put forward their own criminalistic and totalitarian agenda.

Where there was once a generalized view of regionalized differences in America, the violence of the spring and summer of 2020, with much of it professionally orchestrated, not from the left or right but by Deep State operatives, we now see “principalities” where we once saw towns and cities.

Each of these tiny regimes is ruled by a law enforcement official deeply entrenched with local elites and organized crime, profiting on drugs and human trafficking, running courts and jails for personal profit and dishing out mob violence packaged as a fake “war on crime” perpetrated against the population by criminals in uniform.

What are those principalities? We begin a list in New York City, then Atlanta, Philadelphia, Seattle, certainly Minneapolis, but not all cities. Rural counties are so much easier to control with rural poor, rural “white” poor, often addicted to methamphetamines and opiates, a trade that only thrives with full complicity of law enforcement.

Some cities are inherently corrupt, Detroit, Chicago, Toledo, Phoenix, but whose police departments have maintained professionalism and have not turned their emergency management over to Israeli based advisors, now blamed by many, perhaps wrongly, as the cause of much police violence.

Racism and brutality existed long before the Department of Homeland Security under Chertoff sought to turn America’s police into half-baked “spies and commandos.”

With America still in the midst of a pandemic, President Trump hasn’t been involved for months. Why? Is it because his admissions of personally taking banned medications or advocating scam cures has endangered his position as a carnival dancing bear?

The world certainly now knows that the military takes orders from its Commander in Chief if it wants to and otherwise doesn’t. The world also knows that the American military has broken with Trump and no longer is willing to take the money and keep quiet about his dictatorial policies and clear evidence of his diminished capacity.

Yet still, Trump could remain president for 4 more years, through rigging American elections, always a combination of CIA tactics and media manipulation, which is also a CIA tactic if you get down to it, despite the fact Trump’s personal decline is obvious.

By “decline,” we mean the descent from racist, bigot and ignoramus to bumbling fool and aged cripple.

What is also there to see is that what has passed for leadership in Washington, not just under Trump but some of his predecessors as well, is as we assert, a carnival with a dancing bear, one that occasionally bites, that from time to time slips his handlers, but a dancing bear just the same.

0 thoughts on “The Fall of the Dancing Bear”