HOME / WORLD / Imran Khan and Trump Meet, Will Trump Step Up on Kashmir as Promised? 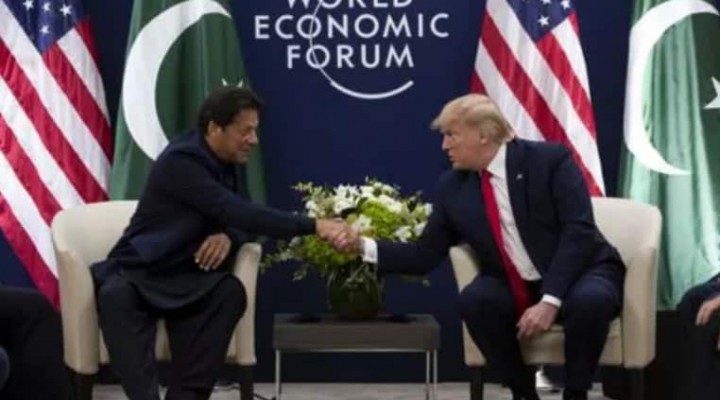 US President Donald Trump has again floated the idea that Washington could referee talks between India and Pakistan to resolve the dispute over Kashmir, but Pakistan’s Prime Minister Imran Khan didn’t appear to bite.

Trump reiterated the offer at a meeting with Khan on the sidelines of the World Economic Forum in Davos, Switzerland on Tuesday, calling the PM his “friend” and making yet another attempt to insert the US into the Kashmir row.

“We’re talking about Kashmir … if we can help, we certainly will be helping. We’ve been watching that and following it very, very closely,” Trump said.

PTI Government believes in reaching out to masses on every Social Media platform for propagation of message of Change. PM @ImranKhanPTI Office has created Youtube Channel. All speeches will be uploaded with English & Urdu subtitles. Subscribe NOW => https://t.co/539gKL43xE pic.twitter.com/2YegQ5Hf0U

While Khan has been open to the mediation idea previously, he did not respond to Trump’s latest overture, skirting past the Kashmir issue entirely during the brief presser. He instead focused on Afghanistan, which he called the “main issue,” noting that Islamabad and Washington are on the “same page.” The PM has previously been less charitable to the US position on Afghanistan, however, telling RT last fall that Pakistan has been regularly blamed for Washington’s failures there.

Despite Trump’s offer to be a neutral arbiter between the nuclear-armed neighbors, he suggested he would not travel to Pakistan for a state visit on his next trip to India in February, telling reporters “Well, we’re visiting right now, so we won’t really have to.”

Trump has attempted to wade into the contentious dispute over Kashmir before, at times with embarrassing results. During a press briefing last July, Trump claimed Indian PM Narendra Modi had personally requested that he mediate negotiations with Pakistan, but he was quickly rebuffed by India’s external affairs ministry, who flatly denied that such a request had been made.

The conflict over Kashmir goes back decades, with India and Pakistan fighting two of their three wars over the territory. Tensions came to a head again last summer after India’s revocation of Kashmir’s autonomy status, which New Delhi said was necessary to combat terrorism and corruption, as well as facilitate development in the region. Islamabad – which also controls a portion of Kashmir – claims that India’s policies there have been “oppressive” and “discriminatory,” targeting its only Muslim-majority state.

Kashmir: The Fight for the High Ground Has Started

0 thoughts on “Imran Khan and Trump Meet, Will Trump Step Up on Kashmir as Promised?”