HOME / WORLD / Even Americans are afraid of America

Even Americans are afraid of America 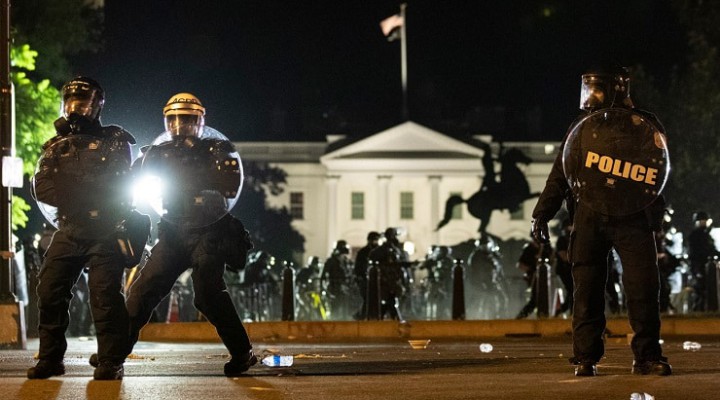 What I am writing today I write inspired by the death of my good friend Andre Vltchek. He pushed all of us, we needed pushing. Now he is gone. We find our families where we can.

We shared out stories, this was mine. I begin.

I am an American, born after the Second World War or Great Patriotic War as it is called in Russia. I grew up in Detroit, my father was a factory worker, my mother the daughter of a coal miner in Kentucky.

Both parents grew up in absolute poverty and, to a large extent, so did I.

Being damned with the memory Donald Trump thinks he has; I remember the 1950s well, but through the lens of politically active parents and a father who loved Russia.

There were reasons he loved Russia. You see, America was always a promise and, to an extent, a “con.” It was the pursuit of happiness for some, the privileged few, but for others it was a life of debt and fear.

I watched as working in a factory killed him. He was 44 when I was born. This was common. Many Americans did not start families until late in life, due to the Great Depression and the war. Many of my friends had fathers who were sick and old during their early childhood.

Factories were often over 130 degrees, filled with smoke and carcinogenic solvents. Worse still, nearly all Americans then smoked cigarettes. Doctors advised this to “calm the nerves” despite decades old research on smoking and cancer, hidden from the public.

In Detroit, it snowed brown. If you breathed, you coughed up brown, everything was industry, everything was smoke, lead from gasoline, sulfur from cheap coal and adulterated food.

Anything could be in food. Milk contained chalk, sausage was all fat and filler, and crackers were made from axel grease as leavening. Pure food laws would come, and then they would be taken away, and the food supply would become even worse, GMO, hormones, anti-biotics and unrecognizable chemicals. Reagan did most of this.

Thus, we grew food, as much as possible on a 40-foot lot behind a tiny house and, in season, picked fruits and vegetables on local farms.

By the mid-1950s, my father’s health had deteriorated, and he began long bouts of hospitalization and recuperation. This left us $52 a week to live on.

To supplement income, we bought used cars, boats, motors and trailers, and repaired them in our yard. Every Saturday, we drove to downtown Detroit to buy the newspaper as it was first published and then scanned for “deals.”

By the time I was 8 I could tear down a car engine. This, however, may have been the best time of my life.

Everything possible we bought from local farmers, meat and cheese certainly, from farms that no longer exist, land long turned into suburbs that today suffer from urban blight themselves.

I remember the elections, Eisenhower twice, guaranteeing 8 years of urban decay and poverty across the nation, where a college education was an impossibility except for a very few.

America was broken, and American workers and their families lived in constant fear. Farmers were being crushed by banks and large corporations.

Eisenhower’s party, the GOP, worked to destroy Social Security and the trade unions, funded by the same rich that backed Adolf Hitler. This war against the American people would culminate in Reagan and neo-conservatism. Trade unions would disappear with representative democracy, destroyed through “gerrymandering” and voter suppression laws.

America began a spiral into fascism under Reagan, one culminating in the Trump dictatorship.

My mother’s family lived in Kentucky. I remember driving to Hazard, Kentucky in 1955 to visit family. Some were doing well, the Gabbards owned a few oil wells, a tire store and a small coal mine.

My uncle Buford, who lost part of his feet from frostbite at Bastogne during the Battle of the Bulge in 1944, owned small farms worked by white sharecroppers.

There were no African Americans in Southeast Kentucky, none whatsoever, not a single one.

To reach the farms, we drove his old military truck through a riverbed. I remember breakfast, it was 4 AM, piles of food.

I also remember visiting my grandfather, my mother’s father. He was living near the railroad tracks in a shack with tar papered walls and newspaper filling the cracks. He had been a foreman in the mines, but had gotten sick as so many did. He would be dead soon.

My other grandfather died in 1913. He drank himself to death, leaving a wife who only spoke German and 7 children. My father helped support them by stealing food which sent him to a reformatory early in life. He was 7.

Life in Detroit was much like life in a European city, to an extent, at least to us it was. The core of skilled industrial workers in Detroit were German, Hungarian, and Polish. My father spoke German (and Yiddish), Polish and Russian. This was common.

A second newer population was Southern, those who came to Detroit to work in the war plants. Detroit was the single largest producer of war materiel in the United States, a city of hundreds of factories, and thousands of “job shops.”

I went to school with their children, who were often barefoot, most could not read, some never learned. It was like they came from another planet. I could barely understand their language, a rough English patois with only a few dozen words.

The subculture that grew up around them in the industrial North was violent, primitive, and steeped in superstition. It was also steeped in race hatred.

The world we grew up in was totally white. Racism was common but less accepted by those of European background as many of those, the skilled industrial “elites” had strong backgrounds in socialism and a high degree of political awareness.

Each Sunday, there was a “roundtable” at my home, my father’s friends, mostly German Americans, discussions of politics and religion. I was allowed to sit in.

This was my real education.

There is only one way to feel secure living in the United States. You have to be very healthy but so old you are still near death and extremely wealthy.

You cannot have a social conscience or political beliefs, you cannot have money invested in stock markets and you had better own lots of gold, canned goods, firearms and endless ammunition.

Then, of course, you must live somewhere where you cannot be found, perhaps a private island.

If you are all of these things, then you can feel perfectly comfortable that you have no reason to fear America or at least not many. If you are the other 99.99% of Americans, you might want to reconsider.

As the world exists today, the United States is able, for reasons no one can really explain, to exist above the law. So many of the things that, so many years ago, we damned Germany and Japan for, America does those things now.

It destroyed Vietnam. I took part in that, killing millions, and the rationale behind that war was less than “paper thin.” The United States was clearly an aggressor supporting a fascist regime in violation of international law.

However, millions of Americans, many of them war veterans, brought the United States to a standstill to end that war. Those people, though alive today, seem to have lost something.

Worse still, their children, at least so many of them, managed to grow up without any social conscience whatsoever.

This brings me back to those Sunday talks with my father and Ed Stouff and Wilhelm Ohm, his two German American friends. The talks were opposition to fascism, not just in Germany but America as well.

Today, opposition to fascism is considered by many anti-American.

Even if a parent wished to instill values in a child, it could only be done through home schooling and blocking off all access to media, no MTV, no Facebook, no “devices” at all.

Such behavior would be considered “child abuse.”

This has left the last few American generations adrift, dependent on fake news and education based on propaganda. After World War II, a great effort was made to end any possibility of social upheaval in the United States, unless of course, that social upheaval served the ruling class as it does today.

Generations were raised to distrust science, to look on social reform as “interference with the natural order of things” and to scorn any information that challenges this primitive outlook.

The result has been catastrophic.

By 1975 it was believed the United States would never enter another “Vietnam.” Now the United States is involved in a dozen “Vietnams,” but fights using paid “terrorists” and economic blockades called “sanctions.”

Nixon’s “mad bomber” campaigns against Vietnam and Cambodia have been replaced with drone attacks. “Joystick warriors” at Fort Huachuca or other bases, Ramstein for instance, have now “terror bombed” a dozen nations or more for 20 years with no discussion of stopping and no one cares or even notices.

Helping enforce this American sewer are the children and grandchildren of the Southern whites who came to the industrial North during World War II, seeking to better themselves.

Instead, they became the fodder for the doctors of despair, the psychological warriors who profit from acrimony and division. Their offspring are the “Proud Boys” and the supremacist “militias,” fighting for the total surveillance state, for more wars, more sanctions and more suffering around the world, and at home.

And so it goes.

The Deconstruction of White Confidence

0 thoughts on “Even Americans are afraid of America”