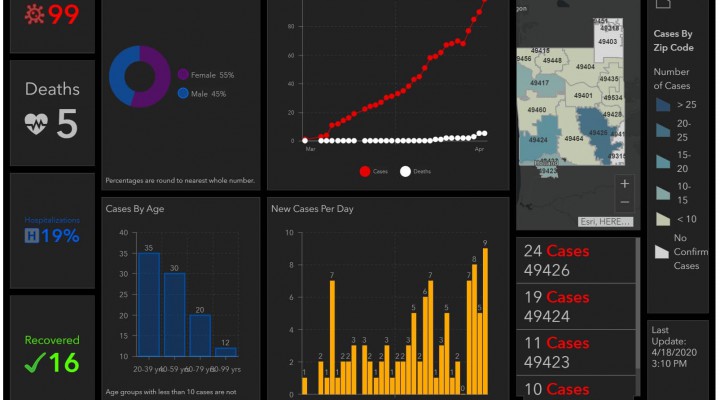 This is the only real data I have ever seen.  I know who puts it out, no fake patients, no mystery, a 100% GOP/Elite run county with tons of cash, home to Betsy DeVos and Erik and a host of others.

What we are learning?

People are getting COVID for a second time.  Some have been very sick, most not so much.

If these are the ‘rich white folks’ numbers, then add in smoking and obesity, which are low here but very very high in most of Michigan as seen on the steps of Lansing’s capitol…and think about this:

We are way down on the curve, with 3 high population counties at ‘terminus’ and two moderate/suburban counties nearing that.

A population of about 4 million in outlying areas will all be infected and climbing the infection rate curve in, what, two, maybe 3 weeks or sooner?  Base on slow infection rates, it could be a month.

This is what the governors are looking at.  States are not ‘stand alone,’ as even New York has large areas with very low infection rates.

Then get to the serious stuff, people are running out of cash and 1200 bucks isn’t going to fix it.  Savings going going gone, credit cards to max and, a big secret here, credit ratings for those in high rate COVID states are being lowered.

This will raise loan costs and the cost of insurance.

Then the fallout, how many were going to buy a new truck?  Motorcycle or boat?  We have had 4 years of solid employment and people were digging out.  Many were ready for a big trip or major purchase, or home remodeling, vacation homes, camping trailers, etc.

None of that is going to happen.

We easily see the psychological hit.  Then we look at those paying to send kids to school, that money is now gone as well and there are NO federal programs anyone stupid enough to get a retail student loan shouldn’t be allowed in school.

On the macro side, the US can no longer afford submarines, planes and aircraft carriers.

Nobody can.  We all got nuked.

Unauthorized Disclosure Live: Locked Down In A Shithole America