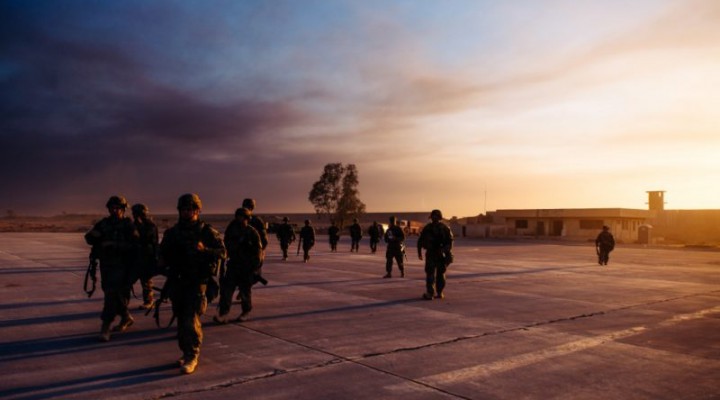 One of the many myths that have been used to justify the push for war with Iran led by National Security Adviser John Bolton and Secretary of State Mike Pompeo is that Tehran is responsible for the killing of more than 600 U.S. troops during the Iraq War.

Special Representative for Iran Brian Hook, whose job is to round up international support for the Trump administration’s campaign of “maximum pressure” on Iran, presented the charge at a State Department press briefing on April 2. “I can announce today, based on declassified U.S. military reports,” Hook said, “that Iran is responsible for the deaths of 608 American service members. This accounts for 17 percent of all deaths of U.S. personnel in Iraq from 2003 to 2011.”

Navy Commander Sean Robertson followed up with an email to media outlets pushing that same line. When this writer asked Robertson for further clarification of the origins of that figure, however, he acknowledged that the Pentagon doesn’t have any study, documentation, or data to provide journalists that would support such a figure.

In fact, the myth that Tehran is responsible for killing over 600 U.S. troops in the Iraq War is merely a new variant of a propaganda line that former Vice President Dick Cheney used to attempt to justify a war against Iran more than a decade ago. Reviewing the history of that earlier effort is necessary to understand why the new myth is a palpable lie.

The history of the myth begins with Vice President Dick Cheney’s determination to attack Iran sometime before the end of the George W. Bush administration. Cheney had contemplated a campaign of U.S. airstrikes on Iran, to be justified by charging that Iran was trying to produce a nuclear weapon. But that rationale for a U.S. military strike on Iran was unanimously rejected by the Joint Chiefs of Staff in a December 13, 2006, meeting with Cheney and President George W. Bush, according to a report by political columnist Joe Klein in TIME magazine.

After that rebuff, Cheney began to focus on another rationale for war on Iran: the alleged Iranian role in killing U.S. troops in Iraq. On January 10, 2007, President George W. Bush gave a speech that included language accusing Iran of “providing material support for attacks on American troops.” Although Bush did not threaten in that speech to retaliate against Iran, his words established a legal and political basis for a possible future attack, according to Hillary Mann Leverett, former National Security Council staff director for the Persian Gulf, in an interview with me in 2008.

After Gen. David Petraeus took over as commander of coalition forces in Iraq in January 2007, the command went all out to support Cheney’s strategy. Its main argument was that Iran was providing Shiite militias with the powerful roadside bombs called Explosively Formed Penetrators (EFPs) that were causing increasing number of U.S. casualties in Iraq.

But the evidence proved otherwise. Hezbollah — not Iran — had been well known as the world’s most knowledgeable designer and user of EFPs. Michael Knights, who had been following the role of EFPs in Iraq for nearly three years for a private security company in London, told me in an exclusive interview in January 2007 that it was Hezbollah that had transferred EFPs and components for manufacture to Palestinian militants after the second intifada began in 2000. He also observed in a detailed account in Jane’s Intelligence Review in 2006 that the first EFPs to appear in Iraq in 2004 were believed to have come from Hezbollah.

Newsday had reported on August 12, 2005, moreover, that Shiite militiamen had begun copying Hezbollah techniques for building as well as using EFPs, based on Lebanese and Iraqi official sources.

The U.S. military intelligence chief in Iraq had claimed in September 2006 that the C-4 explosive used in EFPs in Iraq bore the same batch number as the C-4 found on a Hezbollah ship said by Israeli officials to be bound for Palestinian fighters in 2003. But Knights observed this statement showed that Iran wasn’t shipping the materials for EFPs to Shiites in Iraq. If Iran had been shipping the C-4 to Iraq the previous year, he pointed out, the batch number would have been different from the one given to Hezbollah at least four years earlier.

The command’s effort to push its line about Iran and EFPs encountered one embarrassing revelation after another. In February 2007 a U.S. command briefing asserted that the EFPs had “characteristics unique to being manufactured in Iran.” However, after NBCcorrespondent Jane Arraf confronted the deputy commander of coalition troops, Lt. Gen. Ray Odierno, with the fact that a senior military official had acknowledged to her that U.S. troops had been discovering many sites manufacturing EFPs in Iraq, Odierno was forced to admit that it was true.

Then in late February 2007, U.S. troops found another cache of parts and explosives for EFPs near Baghdad, which included shipments of PVC tubes for the canisters that contradicted its claims. They had come not from factories in Iran, but from factories in the UAE and other Arab countries, including Iraq itself. That evidence clearly suggested that the Shiites were procuring EFP parts on the commercial market rather than getting them from Iran.

Although the military briefing by the command in February 2007 pointed to cross-border weapons smuggling, it actually confirmed in one of its slidesthat it was being handled by “Iraqi extremist group members” rather than by Iran’s Islamic Revolutionary Guard Corps (IRGC). And as Maj. Gen. Rick Lynch, the U.S. commander for southern Iraq, admitted in a July 6 press briefing, his troops had not “captured anybody that we can directly tie back to Iran.”

The centerpiece of the Petraeus campaign was an effort to argue that Iran was responsible for U.S. casualties, primarily in Baghdad, because of its sponsorship of Shiite militias. In August 2007, Lt. Gen. Odierno asserted that 73 percent of all attacks that had killed or wounded U.S. forces in Baghdad during July were by Shiite militias linked to Iran. That charge generated the New York Times headline, “U.S. Says Iran-Supplied Bomb Kills More Troops.”

In fact, however, the increase in U.S. deaths was the direct result of Petraeus’s decision to target Shia cleric Muqtada al-Sadr’s Mahdi Army in the hope of weakening it. Beginning in late April 2007, the U.S. launched dozens of military operations aimed solely at capturing or killing Mahdi Army officers, and the Mahdi Army was strongly resisting those raids and imposing more casualties on U.S. troops.

In his September 2007 congressional testimony, Petraeus introduced a new propaganda line that Iran had turned Sadr’s militia into a “Hezbollah-like force” in order to “fight a proxy war against the Iraqi state and coalition forces in Iraq.” But there was no evidence that those Shiite forces resisting the U.S. military’s offensive had broken away from Sadr and were now responsive to Iran.

The Iraqi Shiite figure said to have been the leader of supposed Iranian-backed breakaway “Special Groups,” Qais al-Khazali, was interrogated by the U.S. military for weeks after his arrest in March 2007. Reports of dozens of those interrogations have recently been declassified, and a review of the reports reveals that Khazali portrayed the “Special Groups” as an integral part of the Sadrist movement. He recalled that a large meeting of the “Sadrist Trend” — the political and military forces aligned with Sadr — made the decision to organize “Special Groups” as early as 2004. And he pointed out that Iranian financial support did not go directly to those groups, but went through the same Sadr channel that supported the rest of the Mahdi Army.

The bitter irony of the Petraeus propaganda campaign against the Mahdi Army is that Muqtada al-Sadr had stubbornly maintained his Iraqi nationalist stance completely independent from Iranian policy in Iraq since 2003. Meanwhile, rival Iraqi Shiite organizations, the Badr Organization and the Supreme Council for the Islamic Revolution in Iraq (SCIRI), having fled to Iran years earlier, had followed strict orders from their Iranian patrons to collaborate closely with the U.S. military and civilian authorities to establish and consolidate a Shiite-dominated regime in Iraq. The Shiite groups loyal to Iran and Sadr’s armed followers were always in bitter conflict, and in 2008 they fought in the streets of Basra and Baghdad.

In a July 2, 2007, press briefing Petraeus’s spokesman, Brig. Gen. Kevin Bergner implied that Iran’s Qods Force had helped a Shiite militia carry out a January 2007 attack in Karbala, Iraq, that killed five Americans. Bergner offered no evidence of any such Iranian role in the attack, however, only the suggestion that the Qods Force leadership was informed about the planning of the operation by a Hezbollah official in Iraq.

The New York Times, Associated Press, and other outlets released stories claiming that Bergner had said Iranian agents helped plan the Karbala attack. Within hours, Sen. Joe Lieberman issued a press release saying that the Iranian government had “declared war on us.” Bergner’s comments and Lieberman’s statement set the stage for the unanimous passage the following week of a Senate resolution that the murder of American military personnel by Iran was “an intolerable act of hostility against the United States.”

Around the time Lieberman was introducing that resolution (in partnership with four Republican senators), Cheney proposed in a meeting with other senior officials that if the United States obtained hard evidence of Iranian support for Shiite militias killing U.S. forces in Iraq, such as fighters or weapons crossing into Iraq from an IRGC base in Iran linked to that assistance.

Defense Department officials quashed the proposal, however, by demanding that Cheney’s staff explain how this military escalation would unfold, and how it would end, according to J. Scott Carpenter former deputy assistant secretary of state, in a 2008 interview with this writer. Cheney’s staff couldn’t provide satisfactory answers.

When officials of the Trump administration claim that Iran is responsible for U.S. deaths in Iraq, they are following Dick Cheney’s playbook. As the Bolton-Pompeo team tries to steer the U.S. toward attacking Iran, it is important to draw that parallel to Cheney’s strategy, and understand the history behind this push for war.