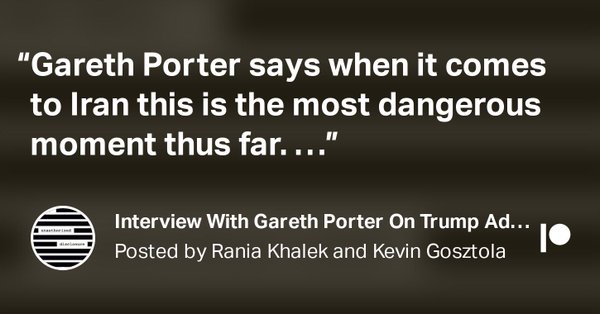 Hosts Rania Khalek and Kevin Gosztola are joined by Gareth Porter, an award-winning journalist whose work has been published at Salon, The Nation, and Consortium News. He is the author of “Manufactured Crisis: The Untold Story Of the Iran Nuclear Scare,” which was published in 2014.

Gareth talks with Rania and Kevin about what we know about the incident that allegedly occurred against a tanker in the Gulf of Oman, which President Donald Trump’s administration says was attacked by Iran. He outlines what the Trump administration has not proven and some of the many questions that should be answered.

He reacts to news of Iran shooting down a U.S. military drone and addresses how Trump seems to be the only prominent official in the White House reluctant to go to war against Iran.

And later in the show, Gareth discusses what a war with Iran would look like and why the U.S. military remains extremely reluctant to commit troops and resources to an open-ended conflict.