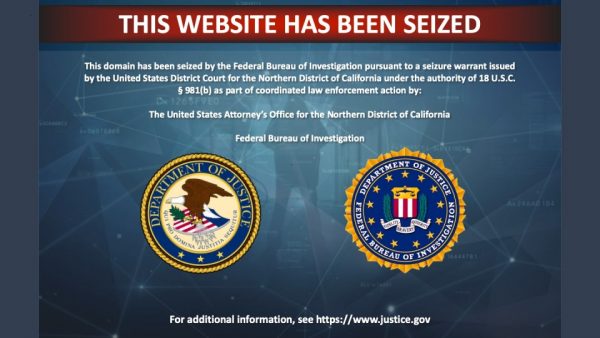 The US Department of Justice announced on November 4 that it had seized the web domain of the American Herald Tribune (AHT), an alternative media outlet that published editorials criticizing US foreign policy. As The Grayzone previously reported, AHT printed articles primarily written by Americans under their own names, often as original content. 128 other internet publications based in Iran were also taken down by US law enforcement.

The US Department of Justice (DOJ) and the FBI engaged in more than two years of legal chicanery to justify its unprecedented seizure of AHT and the other Iran-based websites. Among many intricate maneuvers, they sought to link AHT and the other websites to Iran’s Islamic Revolutionary Guard Corps (IRGC), thus portraying them as accessories to terrorism and in violation of US laws regulating foreign influence operations. The FBI also relied on a public relations campaign to frame the Iranian websites it targeted as agents of a foreign power.

These actions and justifications enabled the FBI to obtain far-reaching new powers that could have serious implications for the basic American freedom to write, publish and access news and opinion.

The FBI’s moves against supposedly Iranian websites were preceded by a campaign by FBI officials to pressure social media partners like Facebook and Google into removing the sites. FBI Director Christopher Wray told reporters that FBI officials had been “providing actionable intelligence” on specific internet accounts to those social media giants to help them remove undesirable sites from their platforms.

The FBI also exploited the national frenzy over Russian interference in the 2016 US election to clear space for its seizure of the Iranian websites. Executive Order 13848, issued in September 2018, asserted that internet publications had “created significant vulnerabilities and magnified the scope and intensity of the threat of foreign interference” in U.S. elections, and declared “a national emergency to deal with this threat.”

The order stated that any “property or interests in property” of any foreign government or “person acting as an agent for or on behalf of a foreign government” found to have interfered with a U.S. election could be blocked. The FBI employed that language to prepare its attack on Iranian websites.

Another legal move to advance the operation was the official designation of the Islamic Revolutionary Guard Corps (IRGC) as a terrorist organization in April 2019. A key component of the Trump administration’s “maximum pressure” policy against Iran, the designation was met with opposition from the Pentagon and CIA, which both considered it a potential threat to U.S. troops around the world. But the DOJ and FBI needed a means of justifying more aggressive action against Iran, such as the mass seizure of websites and other property it claimed was controlled by the IRGC.

The FBI affidavit supporting the request to a judge for seizure of the website contained no evidence to back up the charge; it merely declared that the FBI “believes” the government of Iran was using the IRGC to carry out what it called a “covert influence campaign”.  And it based that belief on “content from the domains which is consistent with Iranian foreign policy and IRGC disinformation tradecraft.”

Despite a paucity of concrete evidence, Judge Joseph C. Spero of the Northern District of California agreed with the FBI’s argument that the websites served Iranian state interests and functioned under the control of the IRGC. Spero thus approved a seizure warrant for those 92 internet domains on October 2, according to U.S. Attorney’s Office for the district.

But the seizure warrant for a second group of 27 websites was only issued on Election Day, November 3, and executed the following day. That delay indicated that the Justice Department and FBI were struggling to prove the 27 websites they sought to seize were, in fact, “operated by or on behalf of the IRGC.”

While seeking a judge’s approval for the second warrant, the FBI issued a joint “alert” on October 29 about what it called “Iranian advanced persistent threat (APT) actors” that were supposedly “intent on influencing and interfering with the U.S. elections to sow discord among voters and undermine public confidence in the U.S. electoral process.”  The FBI bulletin referenced a “significant number of intrusions against U.S.-based networks” but provided further no information on the timing, targets or objectives of such cyber operations.

The FBI’s mention of new evidence of alleged Iranian interference in the election was evidently aimed at enabling Justice Department lawyers to invoke the 2018 Executive Order authorizing blocking assets of a foreign agent that had interfered with a U.S. election.

The problem with the new legal-political argument for hitting back at Iran, however, is that the FBI document acknowledged that the “threat group” was not proven to be Iranian but only “assessed to be located in Iran.” This was a crucial distinction, because it meant that the attribution of the list of IP addresses to Iran was an assumption rather a finding based on conclusive evidence.  In fact, the same FBI report admitted that “many of these IP addresses likely correspond to Virtual Private Network (VPN) services, which can be used by individuals all over the world.” That fact, it said, “creates the potential for false positives.”

The FBI affidavit in support of the second seizure warrant still relied on the argument that the “content” of the “Target Domains” was “consistent with GOI [Government of Iran] tradecraft,” and that various data showed that the publication was based in Iran. This effectively criminalized Iranian publications that engaged in criticism of U.S. and Israeli policies.

But in several cases, the official FBI claims of “GOI tradecraft” revealed an utter ignorance about Iranian society and politics on the part of the US law enforcement agents. The FBI cited a video on a website it seized called Islamic Pulse that supposedly promoted “esteemed prominent Iranian leaders,” including “quotes” from “Ayatollah Knoei and Ayatollah Sistani.”  But there is no one named Ayatollah Knoei.

The figure in question was obviously Grand Ayatollah Abu al-Qasim al-Khoei, a spiritual leader of Iraq from the early 1970s until his death in 1992. As for the “Iranian leader” Ayatollah Ali Sistani, anyone who lived through the Iraq War would know that he has been the politically influential spiritual leader of all Iraqi Shiites since Ayatollah al-Khoei’s death. Ali Sistani is also misidentified as an “Iranian” in the FBI attack on another website the agency planned to take down.

Among the four websites the FBI implicitly conceded were not IRGC assets was the American Herald Tribune. This outlet, unlike nearly all of the other websites closed down, had published articles written by Americans under their own names, and was edited by a Canadian academic named Anthony Hall.

To justify the takedown of AHT and three other papers, the DOJ invoked the Foreign Agents Registration Act (FARA). Citing content in AHT which it claimed “insinuates that particular candidates for U.S. President and U.S. Vice President were pro-Zionist; that mail-in voting could lead to violence; and that the U.S. election is susceptible to foreign interference,” the DOJ argued that these opinions “constitute political activities” on behalf of a foreign state.

The FBI thus linked AHT to the Iranian government based on content that supposedly served Iranian state interests.

The FARA guidelines did not provide adequate legal cover for the operation, however. That’s because FARA does not apply to foreign entities, as Joshua R. Fattal, a former advisor in the Department of Homeland Security’s Office of General Counsel, pointed out.

That law clearly defines an “agent of a foreign principal” as a person or institution that “engages within the United States” in political activities on behalf of a foreign government or actor. Considering that none of the websites targeted by the FBI existed inside the US, it is hard to imagine who the bureau’s arguments about FARA would stand up in court.

Tellingly, the FBI affidavit explicitly ruled out treating the American contributors to AHT as “agents of a foreign principal.” In its affidavit, it instead stated its belief that “genuine journalists that have contributed to American Herald Tribune may be unwitting and unaware of the true nature and origins of the inauthentic news site.” That stance avoided the more fundamental issue of the constitutionally protected right of Americans to write for whatever publication and from whatever position they choose.

Yet another legal argument cited by the FBI was evidently created by the DOJ out of whole cloth to justify its unprecedented removal of websites from the internet. It argued that what it calls “disinformation” published in those sites represents a “service” to Iran performed in violation of a prohibition on any exports of goods, technology or services from the United States to Iran, directly or indirectly, as spelled out in regulations promulgated by the Clinton administration in a 1997 Executive Order.

But FBI and DOJ were unable to point to a single piece of legal precedent to support its assertion that political views expressed on the internet represent a “service” to a foreign government. In fact, the U.S. government has never advanced this argument in a court of law.  That is because, once again, FARA applies only to actors subject to U.S. jurisdiction – not to an actor in Iran that has established a website and arranged for content to be published on it.

Theoretically, the FBI could try to prosecute individuals who have written for the AHT. But as Fattal, the former DHS advisor, has noted, “FARA statutorily mandates that violators of the act must run afoul of its terms ‘willfully,’ so an ‘unwitting; American agent would not be required to register.”

But now that a US district court has allowed the DOJ and FBI to seize the website of AHT on the flimsiest legal and political grounds, the targeting of American contributors to a publication that the FBI views as a foreign influence on U.S. opinion is no longer unthinkable.