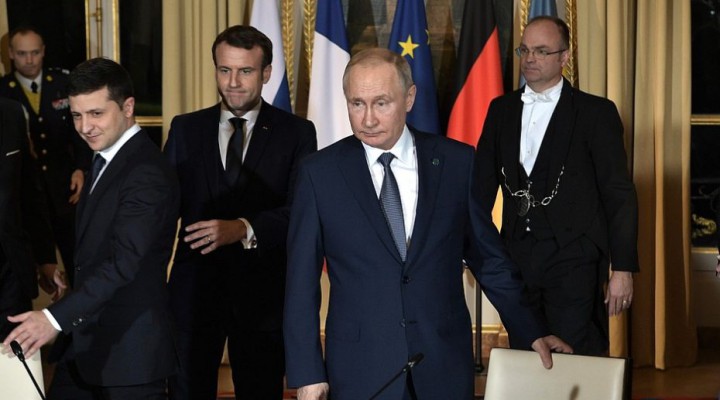 When Zelensky seeks to reassure that “no red lines” have been crossed, his mind is not on genuine peace negotiations

After Ukraine’s president Volodymyr Zelensky finished multilateral peace talks in Paris, the emphatic media message was that “no red lines had been crossed” in negotiations with Russian leader Vladimir Putin. It sounded like Zelensky was far more concerned with trying to reassure observers he hadn’t “capitulated” to Putin, rather than engaging in a genuine dialogue to resolve his country’s conflict.

The so-called Normandy Four format of France, Germany, Russia and Ukraine is scheduled to meet again in four months. The meeting in Paris on December 9 was the first time leaders had convened after nearly a three-year hiatus. It is to be welcomed that President Zelensky, who was elected in April, shows a willingness to engage with Russia, unlike predecessor Petro Poroshenko, in order to bring peace to eastern Ukraine. The region has been mired in nearly six years of civil war.

During the Paris talks, there was agreement to uphold a ceasefire in Ukraine’s Donbas region, and to extend deconfliction zones by withdrawing troops and artillery. There was also agreement on the exchange of all prisoners between Ukraine government forces and the pro-Russia rebels in Donbas. All very good. But what about the full implementation of the Minsk Accord signed back in 2015?

That accord obliges the government in Kiev to permit elections and regional autonomy in the Donbas. It also obliges a full amnesty for rebels who took up arms against the Kiev administration, which came to power through an illegal US-backed coup in February 2014. The Kiev power grab ushered in an ultra-nationalist Russophobic regime intent on dominating the pro-Russian eastern region. The dramatic shift in power in Kiev towards Neo-Nazi demagogues and paramilitaries was the decisive factor in Donbas taking up arms and also in pro-Russia Crimea seceding in March 2014 and joining the Russian Federation.

Regrettably, President Zelensky appears unwilling to implement the Minsk deal which his predecessor signed up to. In fact, at the concluding press conference jointly held by the four leaders at the Paris talks, Zelensky was given to trying to re-write Minsk. He insisted on “security issues” being settled before political issues. That suggests he wants rebels in Donbas to disarm without Kiev recognizing the region’s autonomy. Zelensky also insisted on “not giving up Donbas and Crimea”, and of regaining control over all of Ukraine’s borders, including those adjacent to Russia.

The Minsk deal – which France, Germany and Russia are in concurrence on as being the only viable way forward to peace – does not say anything about Crimea “being returned” to Ukraine. The accord does not precondition autonomy in the Donbas on a prior disarmament.

In other words, Zelensky is going off script on the Minsk terms for finding a peace settlement. His position is still not adhering to the obligations his government signed up to. Perhaps over the coming months, the Ukrainian president may come round to fulfilling responsibilities as stipulated by the Minsk accord.

But there are, unfortunately, reasons to be skeptical. That’s because the relentless Russophobia residing in Washington leaves Zelensky with little room for maneuver. The shaky Kiev regime is totally reliant on Washington’s patronage for its IMF financial life-line, as well as for military support. Zelensky is the president of a vassal state. Washington calls the tune and the tributes.

As could be seen more than ever during the recent impeachment hearings on President Trump, the consensus in Washington is that Ukraine is “at war with Russia”. American politicians and media are convinced in their Cold War delusions that Russia has invaded Ukraine and is the “aggressor” against a “freedom-loving nation”. That propaganda narrative, of course, reinforces the delusions of the Russia-hating ultra-nationalists in Ukraine who have threatened Zelensky’s life if he “surrenders” to Russia.

Hence, the conflict in Ukraine is not being addressed as the internal one that it really is. Instead, it is being viewed through the Russophobic lens as an external problem, allegedly created by Russian aggression. That means the “solution” is about standing up to Russia with lots more US military aid, rather than addressing the core issues of Kiev’s toxic politics and policies towards its separatist regions.

Russia is a guarantor of Minsk, just like France and Germany are. It is not a party with obligations to fulfill. Those obligations are on the politicians in Kiev and the rebels in eastern Ukraine.

With Washington pressing Zelensky to stand up to non-existing “Russian aggression” that means the search for peace in Ukraine will remain elusive. Peace will only come to Ukraine when Washington stops kicking Kiev around like a political football to gratify its Cold War hostility towards Russia. That’s unlikely to happen in the near future.

When Zelensky seeks to reassure that “no red lines” have been crossed, his mind is not on genuine peace negotiations. Rather, he is seeking to placate Ukraine’s hostage-takers in Washington.