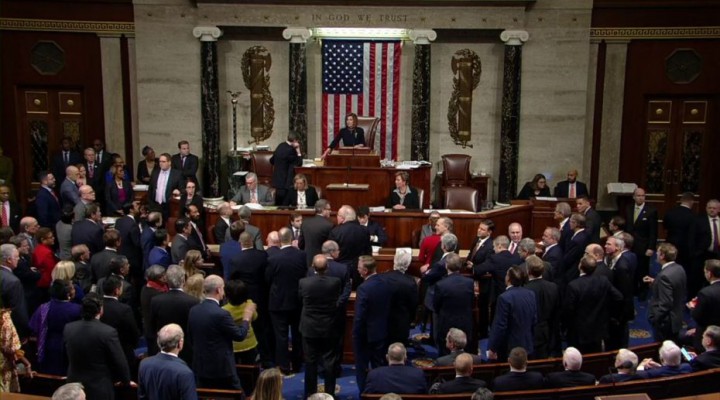 If the Democrat party was a genuine political opposition to Trump then it should be taking up issues that really matter to ordinary citizens. Issues like abuse of power by unelected state agencies that spy illegally on civilians.

Fittingly for the jolly season, the House of Representatives’ vote to impeach Trump was more pantomime than serious politics.

“Oh yes, he is!.. Oh no, he isn’t!..” and so it went on for nearly 10 hours of to-and-fro between Democrats and Republicans. Eventually, the finale came when black-clad Speaker of the House Nancy Pelosi hammered the gavel, announcing President had been impeached – only the third-ever in two-and-half centuries of 45 presidents.

It was a foregone conclusion given the Democrat majority in the House. The next step in the impeachment process goes to the Republican controlled Senate next month where Trump will almost certainly be acquitted.

For all the grandstanding drama and feverish media coverage, the storyline – like all pantos – is scant in credibility. The accusations against Trump of abusing his office in a phone call with the Ukrainian president and of obstructing subsequent Congressional inquiry are light on evidence while heavy on innuendo. For all his flaws, Trump and the Republicans are right in their call that the Democrats and anti-Trump media are hamming it up in a desperate bid to overturn the 2016 election. For the past three years, Washington has been fixated with Trump Derangement Syndrome.

With faux solemnity, Democrat leader Nancy Pelosi said the impeachment vote was a “sad and tragic day” for US democracy. Then she had to quickly check Democrats from bursting into cheers and applause when the impeachment vote was announced. So much for a “sad day”! The Democrats were elated that their three-year plan to oust Trump was at last happening – albeit for a short-lived period until the Senate takes up the matter.

What was truly sad, however, is how the impeachment fiasco dominated other news, thereby drawing the curtain on several far more significant events.

On the same day as the House brouhaha, over in the Senate Inspector General Michael Horowitz was continuing to give withering testimony from his report into FBI wiretapping of the Trump election campaign back in 2016. The misconduct by the FBI in carrying out surveillance on private American citizens is a shocking abuse of power by the intelligence agency. All the implications suggest that the Obama administration engaged with secret services to sabotage the election campaign of Donald Trump in 2016 with phony allegations about Russia collusion. The constitutional violations by the FBI are colossal.

Knowing the murky past of the FBI and its dirty tricks, we shouldn’t be surprised by Horowitz’s findings. A follow-up report by attorney John Durham promises to be even more damning. But what is so astounding is how the US media, by and large, had their focus on the impeachment debacle instead of this far bigger show of grave importance. Perhaps not really astounding given that major media outlets like CNN, New York Times, MSNBC and Washington Post have invested so much capital in whipping up the Russia claims. Their ignoring the FBI misconduct is vital for self-preservation by avoiding accountability for their “Russia collusion” fantasies.

Another blockbuster story roundly ignored was the unfolding scandal at the Organization for the Prohibition of Chemical Weapons (OPCW). The number of whistleblowers from the UN body has grown to 20, according to Wikileaks. They allege that an OPCW report published in 2018 into a purported chemical weapon incident in Syria was “doctored” to wrongly incriminate the Assad government for carrying out an attack on civilians. As a result of the incident on April 7, 2018, the United States, Britain and France days later launched over 100 air strikes against Syria in apparent revenge. President Trump labeled Assad “an animal”. According to the whistleblowers, the OPCW report later in 2018 was deliberately suppressed by senior officials in the organization’s headquarters in The Hague under pressure from the American government. The implication is that the US, British and French air strikes against Syria were naked aggression based on false information. Indeed, the incident on April 7 has the hallmarks of a false-flag operation carried out by Western-backed anti-government militants.

Despite the urgent public interest of this scandal, the Western corporate media have largely ignored the matter, apart from notable exceptions, such as Tucker Carlson at Fox and Peter Hitchens in Britain’s Mail newspaper.

Surely on any objective scale, the OPCW scandal is worth far more media attention than the turgid proceedings in the House. But then again invoking objectivity is a naive request when the polarized politics in the US have become so hyper-subjective.

Other important stories that got sidelined this week was the appeal by 100 Australian doctors demanding the release of Julian Assange from prison in Britain. They reiterated similar concerns expressed by Nils Melzer, the UN special rapporteur, warning that Assange could die in prison if he is not given immediate medical care. The Wikileaks founder is awaiting extradition to the US where he faces 175 years in jail for “espionage”. As the leaks this week from Wikileaks regarding corruption at the OPCW demonstrate the real “offense” committed by Assange is his exposure of war crimes by the US and its Western allies. He is being tortured for telling the truth by Western governments that claim to be bastions of democracy and law. Why aren’t Western media covering this bombshell?

Still another huge story to be buried this week under the avalanche of impeachment popcorn was the report that over 90 US companies on the Fortune 500 list paid zero tax in the year 2018, despite having made combined profits of $100 billion. The companies include Amazon, Bank of American, Chevron, General Motors, Goodyear, Honeywell, JP Morgan Chase, Starbucks, and Verizon, to mention only a few. These companies were able to reduce their federal tax bill to zero because of corporate tax breaks and accounting loopholes introduced by President Trump in 2017.

If the Democrat party was a genuine political opposition to Trump then it should be taking up issues that really matter to ordinary citizens. Issues like abuse of power by unelected state agencies that spy illegally on civilians. But the Democrats this month voted for the latest edition of the Patriot Act extending such powers. They also voted for a record $738 billion spend on the US military, instead of deploying some of that for public good in healthcare and education.

If the Democrat party was a genuine political opposition, then it would be highlighting the crimes of illegal wars the US carries out on foreign countries with impunity. It would be defending the rights of whistleblowers like Julian Assange, Chelsea Manning and Edward Snowden who have exposed systematic state crimes.

If the Democrat party was a genuine political opposition, it would be campaigning for US corporations to pay their fair share of taxes so that working families can benefit from a decent society. They would be going after Trump for aiding and abetting the corporate kleptocracy that America has become.

But they don’t. Because the Democrats – most of them anyway – are part of the same bipartisan corporate feeding trough and war machine that is Washington.

The obscenity is so disgraceful that’s why the need for an impeachment pantomime. And the corporate media dutifully obliges.