HOME / WORLD / The more we find out about Tehran plane crash, the more questions we have. Here are the main ones

The more we find out about Tehran plane crash, the more questions we have. Here are the main ones 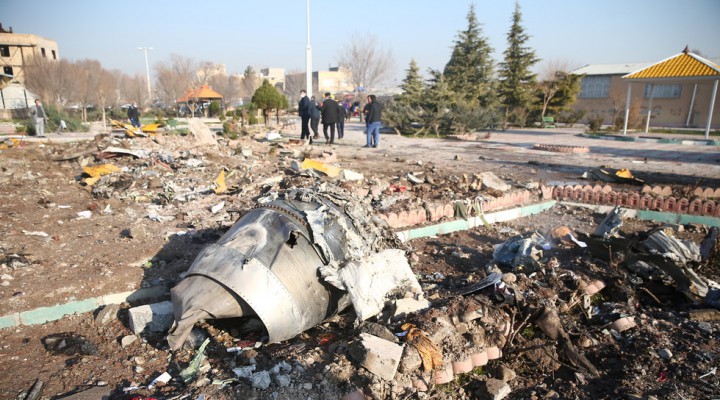 The crash of the Ukrainian plane in Iran so soon after the country launched a missile strike would have been a geopolitical event no matter what. Then came the strangely certain statements, and the retractions.

Iran blames technical issues, Ukraine not so sure

Iranian authorities were quick to blame a technical fault for the fatal crash of the Ukrainian airliner which took off from Tehran bound for Kiev Wednesday morning, with all 176 onboard losing their lives.

Ali Abedzedah, head of Iran’s civil aviation authority, attributed the cause of the crash to engine failure, and said there was no involvement of terrorism.

While Ukraine’s president Volodymyr Zelensky warned against “speculation and unchecked theories”, his prime minister Oleksiy Honcharuk told a press conference that he was not ruling out the possibility that a missile could have brought down the plane.

If it’s a coincidence, it’s a rare one

The timing of the incident certainly raises suspicions about what exactly happened.

Earlier that morning, at around 2am local time, Iran had carried out a barrage of surface-to-surface airstrikes on two US military bases in Iraq. It was reported that 22 ballistic missiles were launched from Iran and all hit their targets, but with no American casualties. The missile attack was the anticipated retaliation by Iran for the US drone assassination of its top Iranian commander, General Qassem Soleimani on January 3. The kill order was given by president Trump.

There is no suggestion that the Ukrainian airliner could have been hit by a stray Iranian missile aimed at the US forces in Iraq. It took off four hours after the airstrikes were launched into Iraq. That would explain why the Iranian authorities have been keen to emphasize a technical accident occurred on board the plane. Most of the passengers were Iranian nationals, as well as Canadian, Ukrainian, British and German.

The Boeing 737-800 is not the same model as the ill-fated Boeing 737 Max, which has been grounded over the past year due to fatal computer navigation problems. The Boeing 737-800 has a good safety record. So too has the operator, Ukrainian International Airlines, which has never had a deadly accident during its 28 years of business.

The aircraft was serviced on Monday, two days before its doomed flight out of Tehran. There were no reported technical issues with the three-year-old plane.

Two minutes after take-off at around 6am local time, PS752 stopped transmitting flight data. The pilot and crew, said to be reliable and “excellent” by UIA, did not communicate back to Tehran air control alerting to any problem.

The flight data shows the aircraft climbing normally to an altitude of 8,000 feet (2.4 kilometers), when it suddenly stopped communicating. One would think that if there was a technical engine problem then the flight data would show a haphazard ascent. Also, the pilot would have been expected to transmit a distress alert of the plane losing power. He didn’t.

Could a missile have brought it down?

Video footage of the aircraft just before crashing 10kms from Tehran shows the plane streaking on fire silhouetted against a dark sky as it dramatically descended, before hitting the ground and emitting a ball of flames.

Todd Curtis, an aviation safety analyst, is quoted by the BBC as saying: “The airplane was heavily fragmented which means either there was an intense impact on the ground or something happened in the sky.”

Iranian government official Qasem Biniaz asserts that if the plane had been hit by a rocket then it would have disintegrated in mid-air.

That’s not necessarily the case. The downing of Malaysian flight MH-17 in July 2014 over eastern Ukraine is believed to have been caused by a ground-to-air missile strike. But when the plane crashed, its fuselage was largely intact before ground impact.

That being said, however, it is doubtful that a stray Iranian missile was involved in the downing of PS752, or any other missile for that matter. Surely radar data or satellite records would show up the trajectory of a missile. If the Americans or Israelis wanted to do it in a nefarious way to smear the Iranians, it would seem unlikely as to how they could have gained access to the airspace to launch such a stealth attack.

Still, the nagging question is why the flight crew apparently did not make an emergency call to the air controllers if there was something untoward going on. The fight data apparently stopped abruptly. That suggests something catastrophic happened in-flight, which gave the pilots no chance of recovering from.

Battle for the black boxes

The flight recorders have been retrieved from the crash site, and they may shed light on what the crew made of the last fateful seconds before crashing. A logistical problem is that the Iranians are reportedly refusing to hand over the black boxes to aircraft maker Boeing or the US authorities. It’s not clear who will carry out an investigation, and besides, any probe may become bogged down by the political stand-off between the US and Iran.

It would be reasonable for an investigation to focus particular attention on the plane’s last service – 48 hours before its disastrous end. Could that have been an opportunity for someone to interfere with the aircraft’s engine or cockpit?

Now that might all sound far-fetched, but nothing about this story has been straightforward so far, and we can likely look forward to years of speculation, international commissions, and contested reports.

0 thoughts on “The more we find out about Tehran plane crash, the more questions we have. Here are the main ones”