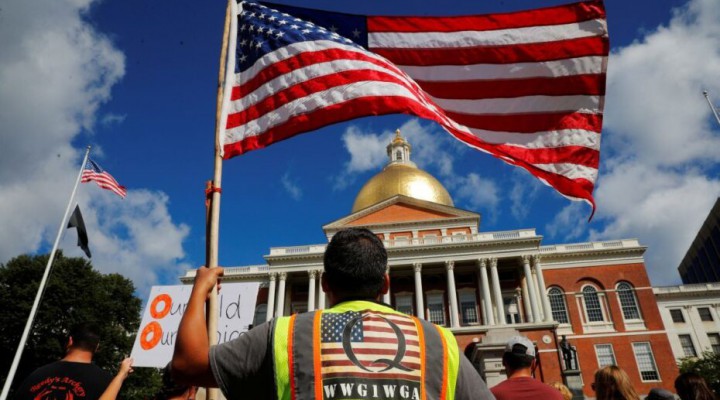 This is shaping up to be the most ugly election in U.S. history with fiery consequences. Could the nation be heading for civil war, a century and a half after the last one?

If we thought 2016 and the fallout of that election was bad, then 2o20 promises to be dystopia on steroids.

The mix is explosive. Gun sales are breaking new records in a country where there are already more privately-held firearms than the number of citizens.

There are dozens of armed factions out on the streets across the U.S., some identifying with leftwing politics, but the greater majority being associated with far-right militia who are largely supportive of President Donald Trump.

Trump has taken sides with incendiary cynicism. The president never condemns far-right groups, not even white supremacist Neo-Nazis. Indeed, he has offered the highest praise from his Oval Office for “patriots” whom he claims are defending law and order. However, Trump and his followers have sought to portray America as being under wholesale assault from “leftwing anarchists” and “socialists”.

This is in spite of Trump’s own Department of Homeland Security assessing that the biggest threat of societal violence comes from white supremacist extremists.

Another study in association with Princeton University found that of the more than 10,000 public protests across the U.S. over recent months mostly against police brutality and racism, more than 95 per cent of the events were conducted peacefully. This is contrast to the picture projected by Trump and Republican supporters who depict the U.S. being torched by “antifa” and “leftwing anarchists”.

That being said, however, there are armed groups out there with radically opposing views. And with the dubious leadership that both Republicans and Democrats are expert in offering, the result is potentially combustible social violence.

Perhaps more important than objective facts, is subjective perception. And the perception – especially among the pro-Trump factions – is that the United States is being over-run by leftwing mobs and Black Lives Matter “domestic terrorists” funded by George Soros and other “liberal globalists”.

Trump, with consummate demagogic skill, is expertly winding up fears among his supporters of a “socialist” takeover of the U.S. This depiction of the Democrat party and its ticket of Joe Biden and Kamala Harris is absurd beyond words. But in Trump World, the facts don’t matter. All that matters is perception, and the Donald is nothing if not adept at ginning up perceptions.

The QAnon phenomenon is a good example. This conspiracy network among millions of Trump’s fans peddles ridiculous beliefs such as Trump being a savior of America’s moral soul from elitist cabals. And this president plays these delusions like a fiddle. There is no doubt that the U.S. is run by a deep-state establishment of corporate ruling class. But Trump, the corrupt oligarch, as savior? Give U.S. a break.

Besides, America lost its soul a long time ago after decades of criminal wars, oligarchic misrule, racist policing, capitalist plunder and other foul crimes, such as political assassination, the latter including a sitting president, John F Kennedy.

Former CIA chief William Casey once reputedly bragged that “we’ll know our disinformation program is complete when everything the American people believe is false”.

We have reached that stage of political and social decomposition. Among the widespread confusion, the fear, the hatred and paranoia, perhaps the biggest expression is public distrust. The American public don’t have any trust in their system anymore, and who could blame them? They have been crossed and double-crossed so many times by their plutocrats and lying media, including by supposed “outsiders” like the Reality-TV conman currently in the White House.

In about two months an election result will be called which neither side will believe. Millions will believe that Trump cheated his way back into the White House if he wins. And if he doesn’t win, millions of his diehard supporters will believe that it was “all rigged”.

Trump has already condemned the forthcoming election as the “most fraudulent” in history. The sinister implication, in the event of losing, is that he is not willing to pack up for a peaceful transition of power. And Trump, “the QAnon savior”, will have plenty of gun-toting “patriots” to call upon to “defend democracy”.

The situation can only get more fraught if initial results show Trump winning the ballot, but then later votes tallied from “mail-in” electorate put Biden ahead. Given that Trump and Republicans are convinced that mail-in voting is a giant fraud (despite clear evidence to the contrary), the competing claims to the White House are set for a bitter long-drawn-out collision, which with rhetorical Molotovs from Trump could be incited deliberately, or even inadvertently, into civil war.

The popular distrust in the American political system is rampant. There are myriad causes for this baleful condition hollowing out the supposed integrity of American democracy. But all of those corrosive causes are American-made. The laughable irony is that Democrats, Republicans and U.S. media still talk about the bogey man of Russian interference which is said to be aimed at “sowing distrust in American democracy”. There is abundantly more than enough distrust in the U.S. among its citizens towards their government, institutions and themselves without any foreign input that could possibly make the slightest difference to the caldron of rancor that exists.

0 thoughts on “Sowing Distrust in America… Who Needs Russia?”