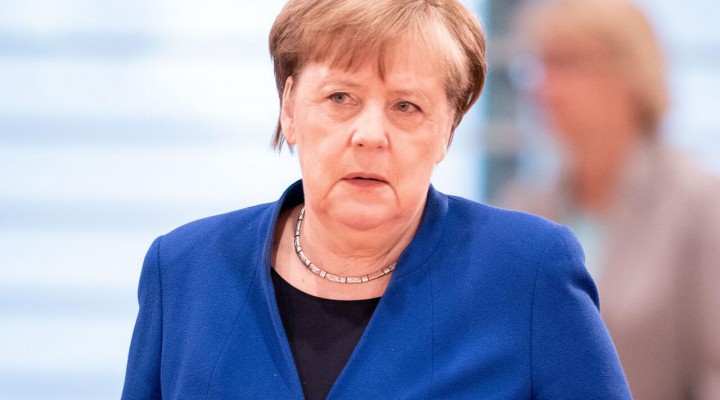 Angela Merkel is a formidable European leader, having served as German Chancellor for 15 years and still going strong. She also no doubt has a formidable intellect, having earned a doctorate in quantum chemistry and previously working as a research scientist before she entered politics.

On the other hand, Frau Merkel seems incredibly gullible and unable to see when she is being gratuitously manipulated by others. Last week, she stood up in the German parliament and spoke of her “pain” on reading media reports that Russian state hackers had allegedly broken into her email account as well as allegedly carrying out cyberattacks on the Bundestag.

Merkel said she was vexed by what she saw as a breach of trust by Russia despite her efforts to “strive for good relations” with Moscow.

Merkel was referring to an article published days before in German magazine Der Spiegel which quoted anonymous German intelligence sources reiterating an old claim of Russian hacking. A Russian national, purportedly a member of Russia’s military intelligence, was named as being the subject now of an international arrest warrant. The Kremlin denied the latest allegation, as it has done in the past.

Der Spiegel’s anonymous sources do not provide any substantive verification of their claims against Russia, relying as usual on lurid speculation. So, what Merkel means when she claimed to have seen “hard evidence” of Russia hacking is rather ambiguous and should invite skepticism. If there is “hard evidence”, then let it be presented to the public for independent assessment, and in order for Russia to have an opportunity to respond in detail. Like so many other instances of Western claims over recent years about alleged Russian interference, from election meddling to cyberattacks, there is never any evidentiary details. That’s because the aim is all about smearing Russia with unanswerable allegations lacking any specifics that might be challenged or disproven.

Moreover, why Merkel and other open-minded people should be additionally skeptical about the renewed “Russian hacking” claims is the timing and political context.

Earlier this month, the Social Democrat coalition partners in Merkel’s government relaunched a public debate on removing US nuclear weapons from German territory.

German citizens have long opposed the installation of nuclear warheads in their country. There are reckoned to be around 20 US B-61 air-launched bombs housed at the airbase in Buchel. The Americans have nuclear bombs stored in other European states, including Belgium, Italy and Netherlands, as part of a so-called NATO sharing agreement.

Rolf Muetzenich, the parliamentary leader of Germany’s Social Democrats, has revived calls for the withdrawal of US nuclear warheads from Germany. Back in 2010, the German parliament voted for this disengagement which has so far been ignored by Washington.

The reinvigorated push by Germans to get rid of American weapons of mass destruction has no doubt alarmed Washington planners who view Europe and NATO as key to projecting power against Russia which in turn is vital for American geopolitical influence.

All the more alarming for American apprehensions if that if Germany were to refuse US nuclear weapons then other European states would probably follow suit. Heinrich Brauss, a former Lt General in the Bundeswehr and ex-NATO policymaker, is quoted by Deutsche Welle as saying of Germany’s proposed withdrawal of US bombs: “That would rock NATO’s nuclear-sharing agreement and burden sharing  – or maybe even lead it to unravelling completely.”

Therefore, to that end, there has been what certainly seems to be a concerted pushback from Washington and NATO against any German attempt to expel US nuclear weapons.

NATO Secretary General Jens Stoltenberg penned an oped for the Frankfurter Allgemeine Zeitung newspaper on May 11 in which he appealed to Germany retaining American nuclear bombs because, he said, it was necessary for deterring “Russian aggression”.

Then we had Richard Grenell, the US ambassador to Berlin, writing an oped for Die Welt on May 14, in which he lambasted Germany for undermining the US-led alliance. “Instead of undermining the solidarity that forms the basis of NATO’s nuclear deterrence, it is now time for Germany to meet its commitments to its allies and to continuously invest in NATO’s nuclear participation.”

This is the context in which Der Spiegel published its hackneyed story on May 8 about the Kremlin allegedly hacking the German parliament and Merkel’s email. (The real and proven culprits here are the American NSA and CIA, as whistleblower Edward Snowden revealed in 2013.)

It’s a tawdry and transparent effort to undermine initiatives for Germany realizing political independence from Washington. The unspoken objective is to rekindle public fears about the alleged Russian bogeyman supposedly hacking into Germany’s government and wielding aggression against Europe.

The bogeyman story is absolutely vital in order to scare Europe into accepting the unacceptable imposition of American nuclear weapons on their territory. Such weapons – 30 years after the supposed end of the Cold War – are a reckless provocation to Russia’s security and a reprehensible endangerment of Europe with a possible nuclear war against Russia. The American ruse is as contemptible as it is risible. Yet Angela Merkel is played like a fiddle in this Cold War charade.