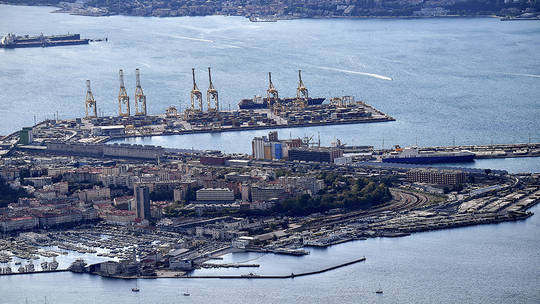 Italy’s endorsement of China’s global integration model – the Belt and Road Initiative – has caused ructions in the transatlantic alliance and also between members of the European Union delineating the bloc’s North-South divide.

In one fell swoop, the Italian overture for joining the ambitious China-led global infrastructure and trade model is a clear sign of the times. Patently, beyond doubt, the world has shifted to a new multipolar reality.

The fact that Italy – a member of the Washington-dominated Group of Seven (G7), and the third-biggest eurozone economy – is moving to explicitly partner with China is a rude awakening for trans-atlanticists who still dream about American-Europe dominance in international relations.

The signing last week of a memorandum of understanding by Italian and Chinese leaders opens up Europe to China’s trade and investment in a way that is truly a breakthrough.

Italian ports, such as Genoa and Trieste, are set to become gateways for China’s economic expansion across Europe, thereby integrating the continent into Beijing’s grand plan to link Asia, the Middle East and Africa with Europe.

Italian officials who back the country’s joining of the Belt and Road Initiative (BRI), including Prime Minister Giuseppe Conte, say the partnering is a “win-win” deal. Italian ports which have fallen into decline over decades through lack of investment will be rejuvenated, it is claimed, and Italian exports will find ready access to Chinese markets.

What is rather galling is the condescension being meted out to Italy by the US and certain members of the European Union.

The Americans have admonished Rome for giving “legitimacy” to China’s “predatory” economics and falling into “debt traps” set by Beijing. As if US capital through the World Bank and International Monetary Fund has a record of altruism.

A White House National Security spokesman even belittled China’s BRI as a “vanity project”  – not like, say, the Trump plan to build a “big, beautiful wall” on the Mexican border.

Italy is a major global economy and great investment destination. No need for Italian government to lend legitimacy to China’s infrastructure vanity project.

88 people are talking about this

But the US hypocrisy top prize must be for Washington’s claims that China’s involvement in building telecoms infrastructure will give Beijing a “back door” to “snooping” on sensitive communications – this from the Americans who tapped systematically into the personal phone calls of European politicians, businesses and the wider public.

EU leaders lashed out at Italy for being “naive” in signing up to China’s new silk route. French President Emmanuel Macron called for a “united European” stance in dealing with the Asian giant. Last year, he even had the temerity to warn that countries who join the “new Silk Road” project, might become “vassals” to Beijing. As if France, Berlin and other EU states are not vassals to Washington’s depredations around the globe.

On Sunday, the two-faced Macron was glad-handing Chinese President Xi Jinping who travelled to Monaco and France following his sojourn in Italy.

Macron wined and dined Xi on the riviera as a prelude to signing lucrative trade deals between France and China in multiple sectors.

The Italians have a point. France, Germany and other EU members have been rebuking Italy for signing up to China’s BRI, but these same countries are cutting their own bilateral deals with Beijing – albeit outside the formal framework of the new Silk routes.

What’s going on here is the base passion of jealousy. Washington can’t abide seeing Italy and other EU members partnering with China’s telecoms industry to build new networks, in place of US firms.

That’s why Washington is playing the scare card of China posing an espionage risk in a blatant bid to damage the prospects of companies like Huawei.

European leaders like Macron talk about a “unified approach” by the EU towards China, when he, Merkel and others want to push their national economic interests. It seems significant that just as Italy was opening up a new era in economic relations with China, Macron was doing his level best to undermine the overture – only to kowtow to Xi on his arrival the next day in France.

The European jealousy seems to have re-emphasized the North-South divide in the bloc. Northern ports like Hamburg and Rotterdam are no doubt concerned that revitalized Southern counterparts in the Mediterranean will challenge their erstwhile dominance.

It’s not just Italy that has decided to try its fortune with Chinese investment and trade. Some 13 members of the 28-EU bloc have already signed up to Beijing’s grand global vision of Eurasian integration. They include Greece, Portugal, Hungary and Poland.

For years, EU member states have been enslaved by economic austerity under neoliberal capitalism. The deterioration in economic growth and infrastructure is particularly acute in the poorer southern EU members, while northern European states like Germany appear to have prospered, and have applied an ironclad policy of fiscal belt-tightening. Nowhere perhaps is the decline in Europe most manifest than in Italy.

That was a major factor in the election of the anti-establishment coalition of Five Star Movement and The League last year. The new government in Rome wants to abandon the neoliberal austerity dictated by Berlin, to allow for massive public investment and for economically growing a path out of stagnation.

The recent partnership with China among the relatively poorer southern and eastern European members is a logical direction for those countries who feel they have been strapped into austerity and underdevelopment by the richer and self-satisfied northern states.

It seems a reasonable venture for Italy to take its chances along with over 100 other nations around the world which have signed up to China’s economic co-development strategy, which President Xi initiated nearly six years ago.

There are warnings from naysayers, including ironically Matteo Salvini, leader of The League, Italy’s governing coalition partner, that Italy could end up as an economic colony of China. Such critics have expressed fears that cheap Chinese imports might lead to Italian job losses. That’s a possible risk.

But what’s Italy to do? Just lie there and stagnate as a colony of neoliberal capitalism?

It is up to Italy to negotiate whatever investment and development plans it is exploring with China and to ensure safeguards for Italian workers. It is certainly not up to the likes of Macron and Merkel to lecture Italians about a “unified stance” on China when they seem to be the first to roll out the red carpet for bilateral deals with Beijing.

China’s growing foothold in Europe is a sign of the times that the old order of American capital and its European vassals are no longer dominant. The old order is resorting to dirty tricks and scaremongering to avert its decline.

Still, the Eurasian silk routes are on the rise. China claims that it is not about Beijing becoming a new hegemon in place of an old one, but rather about win-win development in which the advance of one depends on stability and prosperity among the rest.

There’s only one way to find out if this is a genuinely new paradigm of mutual benefit: join it, negotiate it and embrace it.

Italy is the latest European state to do that. And it’s receiving lots of flak from Washington and the European trans-atlanticists. That negative reaction may be proof enough that Italy is taking a better path.