HOME / WORLD / Iran apologized, but Trump & other US presidents will never say sorry for what they’ve done to Middle East

Iran apologized, but Trump & other US presidents will never say sorry for what they’ve done to Middle East 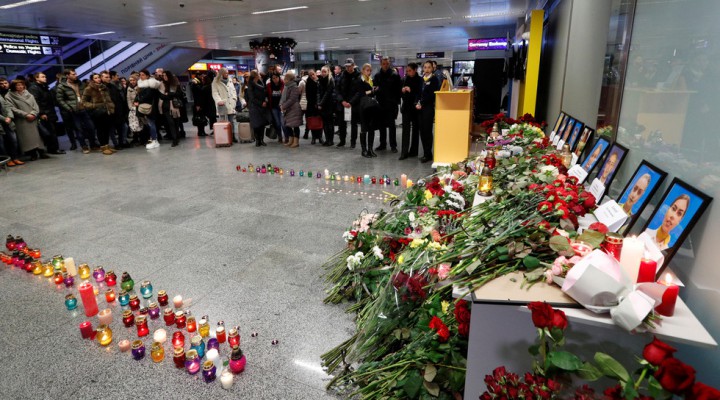 Commendably, Iran has apologized for shooting down the passenger jet and killing all 176 people on board. It shows integrity to take responsibility for the disastrous loss of life at a time of intense adversity.

Now will other parties also show similar humility in admitting their role for creating precarious conditions where death seems an inevitable outcome? Specifically, can US President Donald Trump recognize that his administration’s policy of hellbent hostility towards Iran is driving up conflict and, ultimately, the loss of innocent lives?

The shoot-down of Flight 752 was a heartrending tragedy for countless families of several nationalities. Most of the dead were Iranians, which must add to the pain felt by that nation. But at least by owning up to the truth, the Iranian authorities have spared grieving victims from prolonged anguish of not knowing what happened.

The swift admission by Iran of its terrible error in shooting down the airliner – mistaken for an incoming enemy cruise missile – has taken critics of Iran by surprise. Two days after the plane came down, Western leaders and media were claiming it was an Iranian missile that caused it. Iranian aviation officials at first denied that, saying they believed it was a technical onboard problem, such as engine failure.

Critics of Iran were saying that “the regime” would stonewall the truth and hide behind obfuscation about what happened. Initial Iranian denials weren’t malicious. It was probably more a case of not knowing what happened in a situation of confusion and calamity. When the Iranians put their hand up to acknowledge it was one of their air defense units which had fired the missile, it took integrity and humility to admit fault.

We should contrast Iran’s mature handling of the disaster with the shoot-down of Iran Air Flight 655 in 1988 by a US warship in the Persian Gulf. All 290 people on board were killed when USS Vincennes, a guided-missile cruiser, fired off a surface-to-air warhead at the aircraft, claiming it had been mistaken for an enemy warplane. However, the Americans never formally apologized for the deaths.

After years of wrangling, the US paid out over $60 million in compensation to Iran under a ruling in 1996 by the International Court of Justice. Even then, Washington did not accept liability. “I will never apologize,” said former President HW Bush.

There is also evidence that in the case of Flight 655, the captain of the USS Vincennes was reckless and aggressive in his behavior; and that the shoot-down was no accident. Captain William C Rogers and his crew were later awarded military medals of honor.

n the case of Flight 752 this week, the Iranians were on high alert for an expected American offensive following the missile attack only hours earlier by Iran on two US bases in Iraq. That attack was in revenge for the American drone assassination of Iran’s top military commander Major General Qassem Soleimani in Baghdad on January 3. The Iranians claim that following the missile attack on US bases, there were several reports among their air defense units of suspected incoming enemy planes. It was in this supercharged tension of pending war that the Iranians made the fatal error of hitting the airliner.

Admittedly, it seems ludicrous now that Iran did not take the precaution of closing down its airspace during those hours for normal commercial flights. That seems reprehensible negligence on the part of the Iranians, given the onerous circumstances.

Nevertheless, an objective bigger picture is required to fully comprehend the grief. There is an important distinction between fault and blame. The Iranians are at fault for having caused this horrendous tragedy.

They pulled the trigger. But there is little doubt as to who is ultimately to blame.

President Trump has created a tinderbox situation in the Middle East with his “maximum pressure” campaign of hostility towards Iran. Scrapping the nuclear accord, reimposing crippling economic sanctions and relentless bellicose rhetoric defaming Iran as a “terror state” has pushed the region to the brink of all-out war. Remember, Trump has several times threatened Iran with total destruction, which infers a willingness to use nuclear weapons.

A build-up of American forces, including nuclear-capable B-52 bombers, in the Persian Gulf over the past year has been carried out under the tenuous claims of “defending US interests” from alleged Iranian aggression. The whole manic narrative is turning reality on its head as to who is the real aggressor.

The murder of Qassem Soleimani was the most critical assault yet on Iran’s national security in a mounting campaign of US provocation. There is no evidence to back up Trump’s claims that Soleimani was planning “imminent attacks” on US forces and diplomats in the region. The Americans point to the death of a US contractor last month from an attack on a base in Iraq as the work of Iranian-backed militia. It’s far from clear who carried out that attack. Some reports say it was a jihadist terror group linked to the Islamic State (IS, formerly ISIS/ISIL). In any case, the American response was disproportionate and suggests the contractor’s death was used as a pretext for ramping up the offensive on Iran.

On December 27, US warplanes killed at least 25 members of an Iranian-backed militia in Iraq and Syria. That sparked off violent protests at the American embassy in Baghdad on January 1. Trump and his officials were quick to accuse Soleimani for orchestrating the protests. Then two days later, the iconic military leader – seen as Iran’s second most senior figure after Ayatollah Khamenei – was blown to pieces by a US airstrike ordered personally by Trump.

The following slander from the Americans has been repugnant and gratuitous. Trump has called Soleimani “the world’s top terrorist”, and gloated over his death, saying, “we stopped him, cold.” Given that Soleimani was perhaps the most effective military strategist in Iraq and Syria in defeating the IS terror network illustrates the sickening distortion by Trump and his secretary of state Mike Pompeo. Indeed, the death of Soleimani has been a cause for celebration by the remnants of IS.

Iran is severely at fault for the shoot-down of the civilian airliner. The sense of shame and mortification expressed by the Iranian authorities is palpable. There is genuine remorse for the deaths of their own compatriots and several other nationals.

But the blame for this horrific event lies in Washington and the Trump administration in particular. The relentless demonization and hostility towards Iran, the ongoing illegal aggression in myriad forms from sanctions to blatant military threats, and the cold-blooded murder of a national hero, Soleimani, has created a powder-keg. The downing of Flight 752 is the consequence. Should we be surprised? It is almost inevitable, given the reckless, destructive dynamics unleashed by Washington. Indeed, we may dread more such tragedies and deaths of innocents, even if an all-out war is not triggered.

One thing seems certain. We will not see any apology or conciliation from the US. Humility and responsibility are anathema to Washington’s arrogance.

Western Intel Gets it Right – For a Change

The Danger In Threats

The more we find out about Tehran plane crash, the more questions we have. Here are the main ones

0 thoughts on “Iran apologized, but Trump & other US presidents will never say sorry for what they’ve done to Middle East”