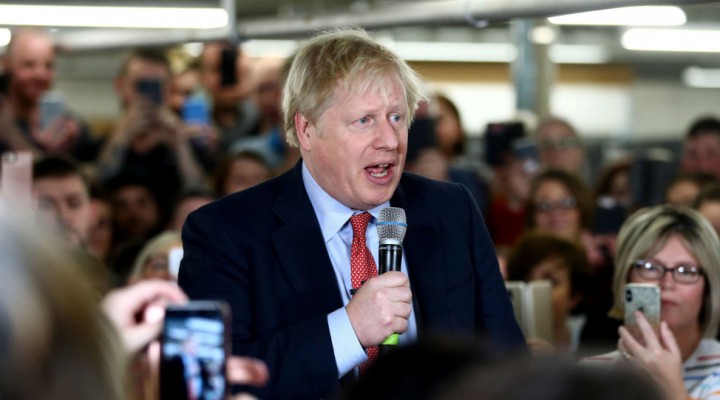 The latest banana skin was when Johnson appeared on ITV’s This Morning show. Probably thinking it would help him score points with voters as affable, jokey “Boris” – and avoiding any harsh questions in a cheesy breakfast show – the prime minister proceeded to take a selfie of himself with the presenters.

The state-owned Chinese telecom giant has been accused of potentially compromising Western states’ national security because of its alleged links with the government in Beijing. Huawei firmly denies it poses any danger of spying on foreign governments or the public. It says it abides by the laws of every country it operates in.

Nevertheless, the American government has imposed restrictions on the sale of Huawei’s electronic devices in the US. Cynics would say that Washington is simply trying to use national security as a pretext for rigging the telecoms market in favour of its American tech giants by hobbling Huawei.

Just this week US President Trump brought up the issue again by urging NATO members to refuse partnering with Huawei to build modern 5G internet networks across their countries. That is a big ask from the Americans because several European states are planning to partner with Huawei to upgrade their telecoms. Huawei is a world leader in technology.

Britain is currently reviewing its options of working with Huawei, taking into consideration alleged risks of national security, and losing crucial investment from China, or incurring the ire of the Americans. Trump warned that the US would not share future intelligence with Five Eyes allies – Britain, Canada, Australia, New Zealand – if they proceeded with proposed telecoms investment from Huawei.

(The irony here, of course, is that US tech giants have already been exposed by whistleblower Edward Snowden for being in cahoots with American intelligence agencies for spying illegally on global citizens and foreign governments, including supposed European allies.)

Johnson, speaking the NATO summit near London this week, appeared to tread carefully on the issue, no doubt mindful of not wanting to offend either Washington or Beijing.

He said: “On Huawei and 5G, I don’t want this country to be unnecessarily hostile to investment from overseas. On the other hand, we cannot prejudice our vital national security interests, nor can we prejudice our ability to cooperate with other Five Eyes security partners, and that will be how – that will be the key criterion that informs our decision about Huawei.”

Earlier the same day, however, as noted above, he was on national TV proudly using a Huawei phone to take a selfie with the presenters. Nice work Boris on giving a free-advertising boost to the Chinese firm which is supposedly being scrutinised as a “national security risk”.

Evidently, from his own personal choice of device, the British prime minister doesn’t think Huawei presents a danger for spying. Or maybe he just doesn’t care.

This is just the latest in a long list of gaffes that Johnson stumbles over every time he appears in public. His speeches are increasingly seen to be full of half-truths, falsehoods, lies, bluster and contradictions. Even the Brexit plan he is pushing is coming apart, from dodgy claims about not selling off the National Health Service to US drug companies, to the ruinous economic impact on British regions like Scotland and Northern Ireland, which Johnson has concealed.

The more Britons see of Johnson, the more his credibility and trustworthiness seem to implode.

With the national elections looming on 12 December, that no doubt explains why the bumbling Boris is doing his utmost to avoid being held to account in hard-hitting TV interviews, like the BBC’s Andrew Neil.

Neil this week repeated his invitation to Johnson to give a leader’s interview on national television in the same way that Jeremy Corbyn (Labour), Jo Swinson (Liberals), Nicola Sturgeon (Scottish Nationalists) and Nigel Farage (Brexit Party) have done over the past few weeks.

It’s a sign of how vulnerable the Conservative leader is if he were scrutinised in public. If he can fall over his own blunders – as the Huawei phone incident shows – how much more damaging would it be to be grilled by a Rottweiler TV presenter. Johnson is running scared.