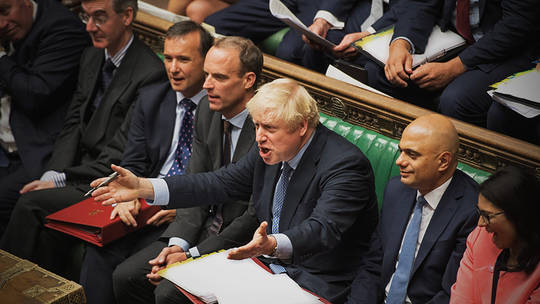 The ultimate Brexit casualty could very well be Britain’s ruling Conservative Party. Cabinet resignations and the purging of rebel parliamentarians by Boris Johnson point to his party heading for a historic schism.

The walking out of cabinet by Johnson’s own brother in protest over Brexit policy epitomizes the fundamental, bitter shift going on in British politics.

Another illustration of just how intense the fracturing strains within the Tory party have reached was this: among the 21 MPs that Johnson expelled this week for defying his no-deal Brexit plans, were two former chancellors, Kenneth Clarke and Philip Hammond, and Sir Nicholas Soames. They will not be allowed to stand in any future election as party candidates.

Soames is the grandson of Conservative icon and wartime leader Winston Churchill, who is also said to be a political hero of the current prime minister. However, in a scathing putdown, Soames said there was no comparison between Churchill and Johnson, saying the latter was neither a statesman nor a diplomat, having made his career by telling lies about the European Union. The Tory grandee said he feared the Conservative Party was doomed to split because it was now being led by what he called a “Brexit sect.”

This apprehension about the emergence of a hard-right, nationalistic version of the Conservative Party led by Johnson and his Brexiteer cabinet has been voiced repeatedly by former MPs who have quit in protest. They claim the Brexit crisis is warping the party from what they view as its traditional political beliefs.

Amber Rudd, the work and pensions minister who resigned from the cabinet last week over his purging of MPs excoriated Johnson for “political vandalism.” She said: “I cannot stand by as good, loyal, moderate Conservatives are expelled.”

On the one hand, there is what we might call a “moderate” Tory wing which compromises lawmakers who would prefer to remain in the European Union, or who at least advocate a “soft Brexit” whereby there is an ongoing trade association with the 27-member bloc.

At the other extreme are the “hard Brexit” Conservatives who found their champion when Boris Johnson took over Downing Street in July from the hapless Theresa May, who fitted into the moderate mould. Johnson has packed his cabinet with hardcore anti-EU hawks who seem determined to get Britain out of the bloc by October 31, even if that means a crash-out no-deal Brexit without any transitional arrangement. That eventuality might be deemed unlawful defiance of a new law forbidding a no-deal Brexit, resulting in a messy battle in British courts in which Johnson may even be liable for jail if found in contempt of parliamentary rule.

The litany of malfeasance that the Johnson-led Tory faction is accused of must be perplexing for many party rank and file. He is accused of lying to the head of state, Queen Elizabeth, over reasons for his unprecedented five-week suspension of parliament.

European media have even now labeled Johnson as a “dictator” which must have given the German media particular schadenfreude. He is assailed by critics for undermining the rule of law, recklessly tanking the economy with do-or-die Brexit kamikaze commitment, and shaking the very constitutional foundations of the United Kingdom, with Scotland agitating anew for independence and the future of Northern Ireland being shrouded in uncertainty.

Given that the Conservative Party has historically always prided itself as the “Unionist party” based on the principle of respect for tradition and upholding the United Kingdom, the madcap Johnson and his Brexiteer cohorts must seem rather alienating to old school Tories.

One of the MPs purged from the party this week for defying Johnson’s gung-ho Brexit policy likened the current political course of the party to that of the Titanic. He said: “The Conservative Party is now led by a narrow sect who wouldn’t be out of place in the Muppet version of the Handmaid’s Tale. It’s like being asked by its captain if you want to get back on the Titanic.”

The Conservative Party has been the bastion of British politics over the past 200 years. It has been in power for more years than the other main rivals, Labour and the Liberals (LibDems). Always a self-declared center-right party, strongly monarchist and imperialist, the Tories nevertheless had a traditional paternalistic social sensibility, deemed as “One Nation Toryism.” From within that moderate mould there was also a sanguine view of Britain’s association with the rest of Europe. After all, it was Conservative Prime Minister Edward Heath who led Britain into membership of the earlier version of the EU in 1973.

But the party always had a love-hate relationship with the rest of Europe, never seeming to fully commit to the bloc. There were also endemic elements of outright Euroskeptics.

When Margaret Thatcher took power during the 1980s and subsequently under John Major into the 1990s, the party not only took a hard-right turn towards neoliberal capitalism, it also embraced sharper animus towards the EU and what was perceived as growing supranational collectivism from Brussels superseding Britain’s sovereignty. Major infamously condemned unruly Eurosceptics within his cabinet as “the bastards.”

Over the past 30 years, the Conservatives have been plagued by intensifying internal divisions over Europe. Those wanting to remain within the bloc tended to be associated with the old One Nation moderates and their supposedly more benign social and economic policies. While the Thatcherite hard right element shared similar ideology on neoliberal economic policies and being anti-EU membership.

When former prime minister, David Cameron, called for the Brexit referendum in June 2016, he did so mainly as a political ploy to buy off the hard-right Brexiteers within the party, as well as to electorally neutralize the rise of the United Kingdom Independence Party led by Nigel Farage. UKIP was making inroads into stealing traditional Conservative voters with its strident quit Europe platform.

Farage has now reinvented UKIP as the Brexit Party. There is media speculation that Johnson and Farage may form some kind of election pact in the future, although Downing Street has denied that.

From many within the moderate tradition of the Tories, Johnson has already redefined the Conservatives as being in the same political camp as the Brexit Party.

Nothing is forever in politics. Over the past two centuries the Tories were the dominant party, the quintessence of the British establishment. However, during the 19th century, the Liberal Party was also a bastion of parliamentary power. Today that party is a rump from previous splits.

Likewise, one can foresee the Conservatives – as we know them – heading for extinction, perhaps fracturing into “One Nation” and a more rightwing nationalistic party led by the likes of Johnson. The outcome would be rather fitting. The chaotic fallout from Europe has been the result of a long-running Conservative Party internecine war. Not only is the culminating Brexit tearing the United Kingdom apart, it is also leading to the self-destruction of the Tory party.

0 thoughts on “Britain’s Tory party is heading for extinction”