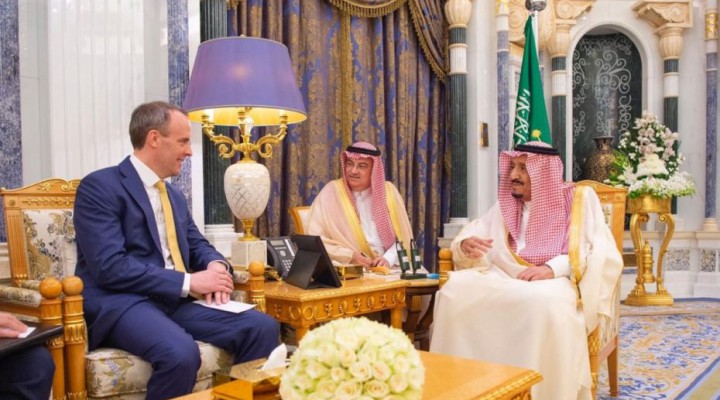 It’s official Britain at its best, posing as the quintessential gentleman upholding morality while at the same time engaging in despicable double-dealing for grubby interests.

The British government announced sanctions against various nations last week, including Russia and Saudi Arabia, proclaiming the punitive measures were due to alleged human rights violations. Foreign minister Dominic Raab, summoning throaty British authority, declared to the House of Commons that it sent a “clear message” to the world of British rectitude.

The next day, however, London made a separate announcement that it was resuming arms sales to Saudi Arabia, despite an international outcry over war crimes committed in Yemen. Thousands of civilians have been killed in Yemen by Saudi warplanes bombing that country over the past five years.

It is estimated by the United Nations that the majority of civilian casualties have been caused by air strikes carried out by the Saudi-led coalition.

Britain, as well as the United States and France, has been arming the Saudi military coalition in its war in Yemen. The British arms trade was halted last year as “unlawful” by a court ruling out of concern for civilian deaths. Now though the British government has decided that the arms dealing can resume because violations were deemed by ministers to be “isolated” incidents. How quaint is the self-serving subjectivity of British officialdom.

The UK-based Campaign Against the Arms Trade (CAAT) slammed the government’s decision, saying it was “morally bankrupt”.

What’s more, it turns out that the British posturing on human rights and sanctions was only meant for public appearance, not be taken seriously. That’s according to the British government itself.

The Independent newspaper reports that British defense minister Ben Wallace immediately phoned his counterpart in Riyadh to “apologize” for the latest imposition of sanctions. “The UK government privately showered Saudi Arabia’s government with praise,” it is reported.

The “discreet” phone call, which emphasized the importance of British arms sales to the oil-rich kingdom, was not publicly disclosed by London. Instead it was revealed by the Saudi state media which boasted about the lavish praise from the British government.

The war has led to the world’s worst current humanitarian crisis with millions of Yemenis facing starvation and death from disease. Images of skeletal children dying from cholera and other preventable diseases should make anyone with a heart tremble with indignation.

The UK’s arms trade is fueling that catastrophe. Evidently, British avarice for profits is too great to put a check on its lucrative weapons dealing regardless of the death and destruction it generates.

But that best of British baseness is only matched by its government’s rank hypocrisy in posing as a defender of human rights and wielding sanctions against other nations.

The sanctions it imposed on Russia were, according to London, related the death in a Moscow prison of tax accountant Sergei Magnitsky in 2009. Russia claims Magnitsky died from an existing medical condition while in detention on massive corruption charges. Washington has used the case as a political stick to beat Moscow with. London is doing Washington’s bidding with its latest sanctions. It also fits the lurid narrative of Russia allegedly running assassination plots in Western states against dissidents and former spies. Thereby stoking a Cold War-style stand-off between the West and Russia.

Britain has been doing similar kowtowing to Washington with its belated ban on China’s Huawei telecoms firm being involved in modernizing mobile phone and internet networks.

Moscow has dismissed the latest British sanctions as “pointless” and said it would reciprocate with its own punitive diplomatic measures against London. That’s something which the British government may come to rue as it seeks to drum up wider international business in the post-Brexit world. The price for serving as Washington’s Jeeves-the-butler flunkey could be high indeed.

How absurd and surreal for London to lecture others about violations when it is complicit in genocide in Yemen. We could also cite Iraq and Afghanistan among many other foreign aggressions. That feat of preposterousness is a reflection of the insidious efficacy of British state propaganda and “education”. Polls show Britons are more likely (compared with other former colonial powers) to think that the British Empire was a good thing, despite the tens of millions who were killed under British subjugation.