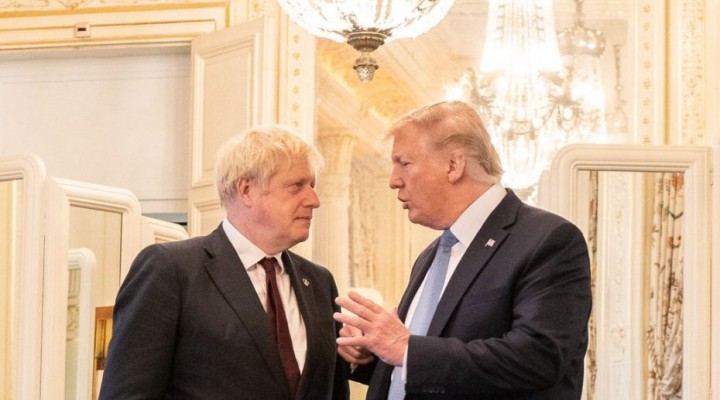 Trump can carry out any crime or provocation leading to war with Iran – safe in the knowledge that Britain’s Boris Johnson will be assiduously following up his rear.

In a first major test of Boris Johnson’s premiership, the British leader has shown himself to be the dangerous sycophant that many feared he would be to US President Donald Trump.

Britain has always been a loyal lapdog for American imperialism. Remember Tony Blair’s obsequious services to GW Bush in the destruction of the Middle East. But under Johnson the sycophancy is even more sinister.

When Boris “Bo-Jo” Johnson was re-elected to Downing Street last month many observers have been waiting to see how he would react in an international crisis, especially given his dependence on retaining favorable terms with Trump for Britain’s post-Brexit economic survival.

It is clear from the present brink-of-war crisis between the US and Iran that Johnson is choosing the path of brown-nosing and emboldening Trump rather than speaking out against what is reckless American aggression. If not speaking out against (too much for lapdog, admittedly), he could at least say that extra-judicial killing is wrong.

Johnson’s brown-nosing is in spite of the fact that Trump has compounded his criminal action of ordering the assassination of Iran’s top general by subsequently threatening Iran with annihilation of its cultural centers if the country dares to retaliate. Trump’s boasting about carrying out war crimes is a sign of someone who is sick in the mind, with absolutely no regard for international law.

But Britain’s Johnson has said nothing about this American barbarity. Instead, he is indulging the Trump administration’s twisted talking points justifying the extra-judicial murder of a foreign state’s senior figure.

Following the assassination of Iran’s General Qassem Soleimani last Friday, the British prime minister kept his silence for nearly two days while holidaying on a luxury Caribbean island. Finally, he issued a statement which, under the mealymouthed guise of urging de-escalation, essentially backed the killing of Soleimani.

Johnson stated: “General Qassem Soleimani posed a threat to all our interests and was responsible for a pattern of disruptive, destabilizing behavior in the region. Given the leading role he has played in actions that have led to the deaths of thousands of innocent civilians and western personnel, we will not lament his death.”

He added: “It is clear, however, that all calls for retaliation or reprisals will simply lead to more violence in the region and they are in no-one’s interest. We are in close contact with all sides to encourage de-escalation.”

This is just cowardly calumny from Johnson. Iran is attacked full-frontally, yet he calls on Iran to not retaliate, which the country has a right to under international law. Johnson is repeating American malign distortions of the Iranian military strategist who had successfully thwarted Washington and NATO’s machinations for regime change in the Middle East.

Johnson recites the unfounded American claims that Soleimani “posed a threat to all our interests”.

On the contrary, it has emerged that Soleimani was engaged just before his death in a diplomatic effort to tamp down tensions between Iran and Saudi Arabia, according the Iraqi prime minister Adel Abdul Mahdi.

Johnson is giving political cover to the Americans to justify their murder not just of Soleimani but also the murder of a senior Iraqi military commander who shared his doomed car convoy leaving Baghdad international airport when it was attacked by US drone-launched missiles.

President Trump executed an act of war against two countries, one of whom is supposed to be an ally of the US. He then characterized this heinous act as a victory against “terrorism”. And further has warned Iran that if it retaliates, the US will hit “disproportionately” dozens of ancient cultural landmarks in Iran.

Conflating propaganda lies, Trump said: “They’re allowed to use roadside bombs and blow up our people and we’re not allowed to touch their cultural sites? It doesn’t work that way,” he said.

Sicko Trump has no idea that American forces in Iraq are a monumental war crime in the first place.

Following Soleimani’s death, Trump claimed a “reign of terror” had been terminated by American force, alleging that the Iranian general had “made the death of innocent people his sick passion”.

With faux sympathy, Mr Trump added: “I’ve deep respect for the Iranian people – they are a remarkable people with an incredible heritage and unlimited potential.”

What does that say about Trump’s depraved mind when after praising Iranian people for their “incredible heritage” two days later he is maniacally talking about destroying cultural centers?

All the European leaders have shamefully remained silent in the face of American aggression towards Iran. They have left Iran isolated by not upholding the 2015 international nuclear accord, allowing Trump to wield unlawful economic sanctions and apply “maximum pressure”.

The European lickspittle behavior towards Trump’s aggression against Iran is akin to the appeasement during the 1930s towards Nazi Germany.

Now in the midst of the latest crisis – brought about by an act of murder and an act of war committed by the Trump administration – the Europeans are pathetically sitting on their hands and telling Iran to “not escalate tensions”.

Trump can therefore carry out any crime or provocation leading to war with Iran – safe in the knowledge that Britain’s Boris Johnson will be assiduously following up his rear.