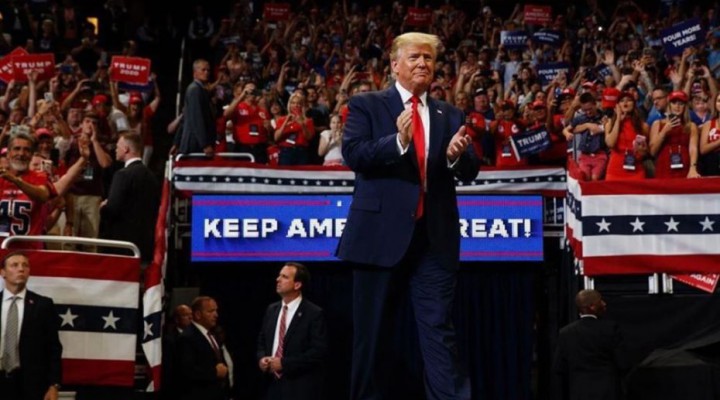 Washington’s official announcement of the withdrawal of US troops from the northeast of Syria has provoked alarm and condemnation at home as well as from Washington’s allies. However, it is easier to understand the actions and aims of the Trump administration when one analyzes events in the light of an internal clash within the US deep state.

Before looking into the US withdrawal from protecting the SDF (Syrian Democratic Forces) Kurds, it is worth considering what has been happening in the US in recent days to get a better picture.

The Democratic party has officially requested the impeachment of Donald Trump for allegedly pressuring the Ukrainian president, Volodymyr Zelensky, to investigate the possible corrupt actions of Joe Biden’s son Hunter Biden while the latter was in Ukraine.

The allegation against Trump arose as a result of a report written on August 12 by an anonymous CIA agent with access to many White House employees and officials. The report is probably another russia-gate hoax, this time Trump allegedly asked his Ukrainian counterpart to begin an investigation into Joe Biden and his son, Hunter, who was a former member of a Ukrainian company that ended up the subject of a corruption investigation. The anonymous informant made himself available to testify before a Congressional committee behind closed doors.

As if to further confirm an ongoing civil war within the US deep state, a second whistleblower has made more “revelations” about the phone call between Trump and Zelensky. Many identify this person in John Bolton, recently fired by Trump. Bolton was disappointed with Trump’s lackluster enthusiasm for war.

The Democratic Party, currently in the process of selecting their candidate to contest the 2020 presidential election, has been forced to pursue the strategy of impeachment even as it enjoys little prospect for success given that the Republicans hold the majority in the Senate. Polls, moreover, show that the majority of Americans are opposed to impeachment in general.

The closer we get to the elections, the more the Democrats will feel the need to pander to their most extreme elements in the interests of winning over delegates in the primaries. This has prompted Trump to go all out against those members of the deep state aligned with the Democratic Party.

As I have previously written, Trump’s threats always have a deeper goal. Let’s take a look at some previous behaviors of Trump.

A typical example is the US threat to withdraw from NATO. The threat was never acted upon, because NATO members were accordingly startled into increasing their military budgets as Trump had demanded. Washington’s strong alliance with Riyadh, furthermore, has brought positive returns for America’s arms sales. We can therefore see how Trump’s threats to NATO served the purposes of improving the bottom line of America’s military-industrial complex. These arms manufacturers supported Trump’s electoral campaign and, because he is bringing home big money for them, they are bound to support him again in his 2020 bid.

Trump’s threat to leave NATO was never real, but the shakedown worked, forcing European allies to hand over their cash to US arms manufacturers, the various components of the deep state coordinating with the administration to ensure a positive outcome for relevant stakeholders.

Trump well understands that he will receive loud censure and obloquy if he deviates too much from the foreign policy charted by Washington’s true policy-makers, and so seems to understand that there is a big difference between what he is able to say and what he is able to actually do.

Trump only has short-term objectives in mind, the 2020 elections currently being foremost in his mind. We can observe a method to his madness with relation to Iran and North Korea. First he threatens these countries with complete destruction, then (knowing that a total war against Iran and North Korea would be impossible to sustain) tries to establish a direct dialogue with the leaders of these countries – only to be rewarded with a photo opportunity that will be most useful in the upcoming electoral campaign.

Trump’s strategy nevertheless failed when Rouhani called his bluff and decided not to meet with him in New York at the conclusion of this year’s meeting of the UN General Assembly, robbing him of the much-sought photo opportunity.

Similarly, talks between Kim Jong-un and Trump have not yielded much progress. Trump’s modus operandi explains his willingness to meet with people normally considered by American exceptionalism to be beyond the pale. Trump views foreign policy less in terms of grand strategy and more in terms of electioneering and personal gain, giving little consideration to the long-term consequences for the United States.

A striking example of this short-term thinking is Trump’s withdrawal from the Iranian nuclear deal, fulfilling an electoral promise and winning points with his electoral base – but greatly reducing the level of influence the US may have on Iranian policy.

Similarly, negotiations with North Korea confirmed that the US has no military solution for Pyongyang, especially when seeking to preserve relations with South Korea and Japan. As with a war with Iran, the US’s allies would be the ones on the receiving end of most of the blows, something that Japan, South Korea, Israel and Saudi Arabia would never countenance. These countries, accordingly to a multipolar environment, are bound sooner or later to come to arrangements with Tehran and Pyongyang, leaving the US even more isolated in the region.

When meeting with Kim Jong-un, Trump sought a historical photo-op that would present him in sharp contrast to his predecessors. That said, the talks foundered on the absurd American demands for the North Koreans to first complete disarmament before sanctions could be removed.

While Trump, not being in control of his foreign policy, can decide and propose very little, he can nevertheless try and get the most mileage from his “foreign policy” for the purposes of burnishing his image with an eye to the 2020 presidential election.

Once we understand that Trump’s foreign policy is only for domestic purposes, we see how the agenda of US imperialism remains quite undisturbed, with the deep state continuing to seek geopolitical expansion and start new wars or fuel existing ones.